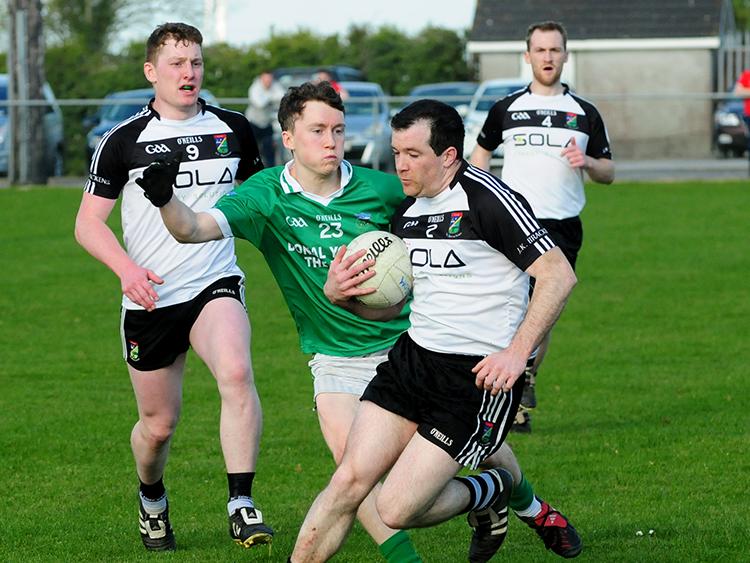 The Hibernian Inn North Tipperary Senior Hurling Championship is down to eight contenders following the opening round of games which took place over the weekend.

The clash between Silvermines and Toomevara at Templederry on Saturday evening launched the Hibernian Inn North Tipperary Senior Hurling Championship - goals from Jack Delaney and Mark McCarthy (two) helped to propel Denis Kelly’s Greyhounds toward a comprehensive 3-18 to 0-15 win and into the quarter-finals.

On Sunday in Borrisokane Kilruane MacDonagh’s franked their early season form with an impressive 0-27 to 1-13 victory over the home side.

Meanwhile on Sunday afternoon MacDonagh Park, Nenagh hosted a double header - in the first contest Templederry proved too strong for Lorrha-Dorrha winning 0-23 to 1-14 (Templederry led 0-9 to 1-4 at the break). Next up was the clash of rivals Burgess and Portroe - Timmy Hogan’s men raced into a 0-12 to 0-7 interval lead before a Brian Hogan goal propelled Burgess toward a 1-21 to 0-10 win.

Dolla also played host to a double header on Sunday evening. Having sacked their management team following an eleven-point defeat suffered at the hands of Kilruane MacDonagh’s in the opening round of the Tipperary Water County Senior Hurling Championship Nenagh Éire Óg re-grouped and beat a resilient Ballina side 2-17 to 2-14 having trailed 0-7 to 1-6 at the break. In the second game at Dolla defending champions Kiladangan were superb when beating the 2016 county intermediate hurling champions Newport 1-21 to 0-10 despite having also fired fifteen wides.

The Tipperary Water County Senior Football Championship was scheduled to get underway on Friday night, but the first round clash between Éire Óg Annacarty and Loughmore-Castleiney was called off due to a bereavement.

The championship got underway proper on Saturday when Ballyporeen beat Upperchurch-Drombane 1-10 to 0-12 in Seán Treacy Park while in Clonmel Arravale Rovers recovered a six-point deficit to beat Fethard 2-12 to 2-10.

New Inn hosted a double header on Sunday when Galtee Rovers beat Ardfinnan 3-10 to 0-12 (Galtee Rovers led that encounter 1-8 to 0-6 at the break). Next up came the clash of Clonmel Commercials and Cahir - Commercials won on 0-21 to 3-8 scoreline.

On Sunday evening in Templetuohy Drom & Inch beat divisional rivals JK Bracken’s by the narrowest of margins to get their senior championship campaign off to an encouraging start (2-11 to 1-13) - Drom led that clash 1-7 to 0-8 at the break.

In Monroe Killenaule proved too strong for Kilsheelan-Kilcash (3-17 to 2-12) while in Cahir Moyle Rovers streaked to a 1-9 to no-score interval lead against Aherlow Gaels before earning a 2-14 to 0-6 win over the men from the West.

A highly-motivated and flying-fit Limerick team got the better of Tipperary in a Munster Senior Camogie Championship semi-final played at The Ragg on Sunday afternoon - Brian Boyle’s Tipp team gave it their all, but struggled to discourage the Shannonsiders in a cracking game (0-14 to 1-14).

There was terrific news from the All-Ireland Scór finals in Belfast on Saturday when Borris-Ileigh’s Katie Shanahan, Noel Joyce (JK Bracken's) and Newport all collected national titles.

On Saturday evening at Celtic Park in Clonmel St Michael’s collected the Tipperary Cup when beating Peake Villa 2-0 in the final - the goals came courtesy of Paul Breen in the first half and David Slattery in the second. St Michael’s have now secured the league and cup double and the Saints still have the Munster Junior Cup final to come.

Meanwhile on Sunday Nenagh AFC missed out on the Limerick District League Premier League title by a single point from Janesboro - on Thursday evening the Blues beat ‘Boro 2-0 at Pearse Stadium, Janesboro to take the title race to the final day. The terms and conditions on Sunday were clear: Nenagh AFC required a win over Carew Park at Islandbawn, Nenagh and then hoped that Aisling Annacotty could get a result against Janesboro. Nenagh AFC held up their end of the bargain when beating Carew Park 2-1, but Janesboro clung for a 3-2 win over Aisling to seal the league title.