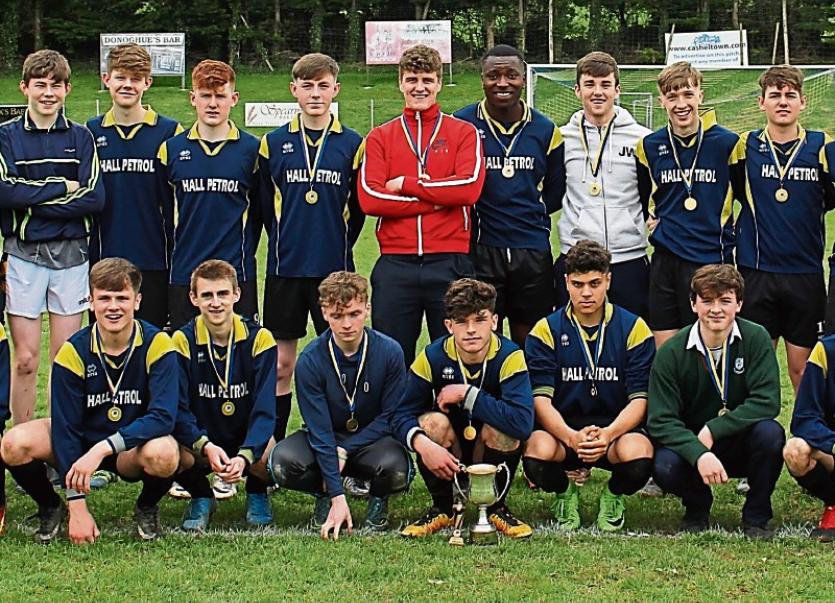 Winners of the 2017 Dick Wood Cup are the boys from Cashel Community School!

Over the past nine years this competition has been played between four South Tipperary Schools: Cashel Community School, Colasite Dún Iascaigh Cahir, Rockwell College and Scoil Ruain Killenaule. The competition is played in honour of Dick Wood - a founder member of Cashel Town Soccer Club.

On the day Cashel got off to a great start when a fine through ball found Bolu Giwa one on one with the Rockwell keeper and finished calmly to the net. Following the lead for Cashel Rockwell then enjoyed a period of domination and took the game to Cashel having taken control of midfield. However Cashel looked dangerous on the break and in the 35th minute Mark Furlong was taken down in the Rockwell area. The resultant spot kick was taken and scored by CCS captain Alan O’Donnell.

In the second half Cian Bargary added a third for Cashel finishing off a move inside his own half before rounding Rockwell keeper John O’Dwyer and finishing to the empty net. Rockwell replied with a fine strike from Cathal De Fonte. Some more chances did present themselves for Rockwell before the game was settled by Cian Bargary and James Walsh for Cashel.

Best for Cashel on the day were centre half Brian Davern and midfielders Alan O’Donnell and Conor Horan while Rockwell were best served by centre backs Joey Noonan and Conal Kineally and captain Shane Maher.

With this victory Cashel now are level with Rockwell on three wins in the competition with Cahir on two and Killenaule on one.

Presentations were made by Cllr Tom Wood, representing the Wood family, with help from Martin Coleman, CCS.

Special thanks to Cashel Town Soccer Club for use of their pitch. Thanks also to Joe Ahern (Rock House Restaurant) for sponsoring medals for both teams and the Man of the Match award which went to Alan O’Donnell (CCS) and thanks also to the match officials.