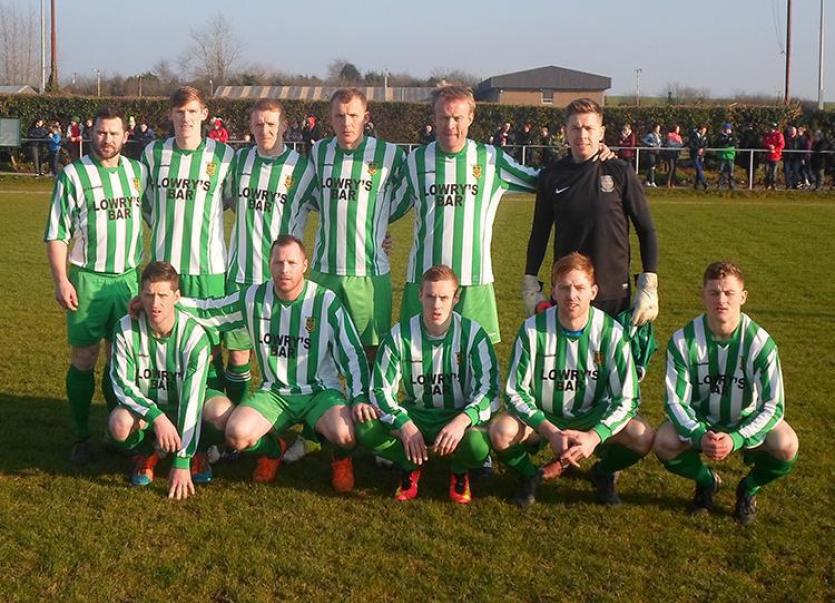 St Michael’s were denied a famous treble at Celtic Park, Clonmel on Saturday evening - having already collected the Tipperary South & District League double the Saints hoped to successfully defend their provincial title, but, unfortunately, James Walsh’s side were beaten by a Pike Rovers team who performed brilliantly.

The Saints took the lead as early as the 18th minute, but Pike Rovers responded to tie the game before the break and then proceeded to dominate the second half. St Michael’s struggled to create chances of note after the break while Rovers’ striker Cian Collins tormented the Tipperary side. Indeed, James Walsh and his team can have few complaints about this result - Pike Rovers proved themselves the superior side in this terrific contest.

Pike Rovers created an opportunity as early as the third minute when Cian Collins snatched at a reasonable opportunity.

The Saints’ Jimmy Carr intercepted a sloppy Pike pass in the 17th minute and set up David Slattery for a shot which Rovers ‘keeper Gary Neville pushed out at the expense of a corner. Paul Breen thundered in a header from the resultant delivery and although Neville saved Pat Quinn was allowed to take a touch, swivel and fire St Michael’s into an 18th minute lead.

Within seconds Pike Rovers assumed they were on terms when John Connery headed home, but the match officials ruled the goal out for what, we assume, was an illegal challenge on the Saints’ Aaron Wall.

Pike Rovers, however, did not have to wait long to get on terms. In the 24th minute St Michael’s coughed up a corner and a superb header from Pa Mullins beat Aaron Wall - a sensational equalizer.

Two minutes later Mullins turned provider and played Cian Collins through with an outstanding back-to-front delivery - Aaron Wall, however, saved brilliantly. Then, in first half injury time, Joey Mulcahy’s searching delivery was headed home by Chris Higgins, but, once more, the referee ruled that the Pike Rovers goalkeeper had been unfairly challenged.

An enthralling contest developed after the break as Pike Rovers pressed for a lead goal and St Michael’s who, it must be said, looked a little tired, tried valiantly to hold their eager Limerick opponents at bay. The Saints lost key players James Walsh and David Slattery to injury during the second half while Pike Rovers created a series of terrific goal-scoring opportunities.

Two minutes into the second half Cian Collins fired narrowly wide, but the Pike Rovers man cracked in a superb goal in the 51st minute to present the Limerick District League side with a precious goal - Collins rolled his man beautifully and then fired a brilliant right-footed half volley into the roof of Aaron Wall’s net following a Wayne Colbert delivery.

St Michael’s almost conjured an equaliser in the 53rd minute, but Rovers’ Wayne Colbert hooked Pat Quinn’s header off his own line.

Despite such encouragement for the Saints Pike looked the more accomplished outfit and bravely pushed for a third killer goal. In the 63rd minute an Eoin Hanrahan free kick whistled just wide of a St Michael’s post with ‘keeper Aaron Wall reduced to the role of spectator. Colin Daly fired wide ten minutes later and Cian Collins enjoyed three further gilt-edged opportunities in the 77th, 81st and 90th minutes to add to his personal tally - the Saints’ Aaron Wall did especially well to save two of those chances.

END OF THE SEASON

The defeat suffered at the hands of Pike Rovers brings a terrific season for the Saints to a close. Although St Michael’s also lost the Munster Champions Cup final to Abbeyfeale United to win both the league and cup titles in the Tipperary South & District League reflects positively on a club who collected the Munster Junior Cup in 2016.

It should also be noted that besides their domestic commitments St Michael’s endured an arduous route to this decider. St Michael’s got their cup run underway with a 3-0 win over Kilsheelan United before beating Cashel Town (3-0) and Clonmel Town (3-0) away from home. In the fourth round the Saints were away, once more, to Thurles’ Peake Villa and thundered to a 5-1 victory.

St Michael’s then made two consecutive trips to Waterford in the fifth and sixth rounds when beating Hibernians (3-2) and Dungarvan United (4-2) respectively to qualify for the last four. And, the Saints were drawn away from home, once again, against Broadford United in the semi-finals, a clash St Michael’s won 4-2. Indeed, it is extraordinary to note that the Tipperary South & District League champions have only been drawn at home once during this campaign.

St Michael’s also made it as far as the fifth round of the FAI Junior Cup before losing out to Usher Celtic on penalties.