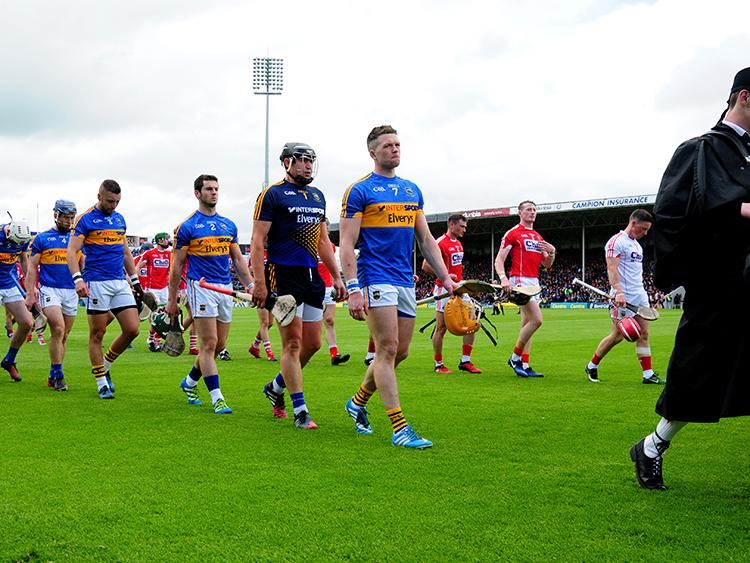 Following the four-point defeat suffered at the hands of the Rebels on Sunday (1-26 to 2-27) in a dramatic Munster quarter-final senior hurling captain Pádraic Maher explained that the Tipperary players were “gutted”, but the Sarsfields man, who appeared absolutely devastated, conceded that Cork had “dictated the game from the very start”.

“It is very disappointing, but fair dues to Cork,” Pádraic Maher told the assembled press corps at Semple Stadium, Thurles on Sunday evening.

“They totally deserved their win today. They dictated the game from the very start and they made us chase it all over the field. I thought when we got it back and we went a point up that we were going to stay on top, but fair play to them they got back and they got the goal that was a killer. We are just gutted,” Pádraic Maher explained.

The Cork attack, of course, is known for its speed, but it appeared as if the Rebel plan to restrict space in their defensive half of the field and create room in Tipperary’s had the more significant impact on this contest. Indeed, the All-Ireland champions’ full-back line found itself isolated on a regular basis while the half-back line was also exposed to runners who struck from deep.

“They do have a lot of pace, but that's nothing that we did not deal with before,” Pádraic Maher revealed.

“They had a bit of a plan and worked it off to a tee. We were just chasing and they just dictated the game. It's very disappointing from our point of view,” the Thurles Sarsfields star added.

“I don’t know if we were that flat,” argued Pádraic Maher.

“We still fought our way back into it even though we were not going that well. We can’t question lads’ desire or the fight that was in them. Lads were diving in for blocks; Noel McGrath was diving in for blocks and John McGrath - we kept fighting there to the very end. It's just that Cork were that bit sharper at the finish.”

Sunday’s Munster Senior Hurling Championship quarter-final featured a frantic contest and fifty-six scores. But, ironically enough, Pádraic Maher explained that it was actually Tipperary’s intention was not to get into a shootout with this Cork team.

“We said that we didn’t want to get into a shootout with Cork because they are so dangerous. That’s what they want and the game was dictated to us like that. It became a shootout and they came out on top in the end, unfortunately,” Pádraic Maher said.

An outstanding John McGrath goal presented Tipperary with a 1-22 to 1-21 lead in the 56th minute, but Cork recovered to score a second goal which propelled Kieran Kingston’s men toward a famous win.

“Yeah, it was a killer on our part. Look, it was a mistake too because two lads went up for that (ball) and left one (Cork player) in behind. Look, things just did not work out for us on the day. Our performance was not great, but we are not questioning anybody's desire.

“We wanted to win that as much as Cork did, but it is just that they were that bit sharper on the day and I suppose that bit of hunger just came out on top. As Kieran Kingston said to us in the dressing room there they were waiting twelve months for this so fair dues to them, they got the result that they deserved,” Pádraic Maher added.

“Last year was not a true reflection of that team. Cork definitely stood up today. Unfortunately we did not have enough to match it, but that's sport. It was tit-for-tat for long periods of the game. But, look, Cork just edged it out in the end. They worked at it from start to finish and, unfortunately, we just did not match that today,” Tipperary centre-forward Michael Breen said in the wake of the four-point defeat to Cork at Semple Stadium, Thurles.

“Any team that builds a bit of confidence and gets ahead they are going to drive on. They built their confidence from early on in the game and the momentum kept with them,” the Ballina man said.

“Championship is always a step up from the league - it was fast, it was intense and Cork were just in our faces for the whole time,” Breen added.

And, John McGrath’s goal, which briefly wrestled the initiative away from Kieran Kingston’s side during the second half, was not enough to put Cork off the scent.

“Well, it gave us a lift alright, but Cork got a goal shortly after and that was the icing on the cake as they say - that drove it home for them,” Michael Breen said.

Now the attention of the Tipperary players turns to the future and, of course, an All-Ireland qualifier campaign.

“Work rate is the only thing that we can do now - we have to get back to Dr Morris (Park), get back in here (Semple Stadium, Thurles) and just work our socks off. It was tough coming in as number one from last year, but last year is over,” Michael Breen explained.

“We have an x on our back now and we have to come up with something new for the rest of the year. Today was not good enough and the Munster championship is over for Tipperary. So, it’s all about the next day now.”