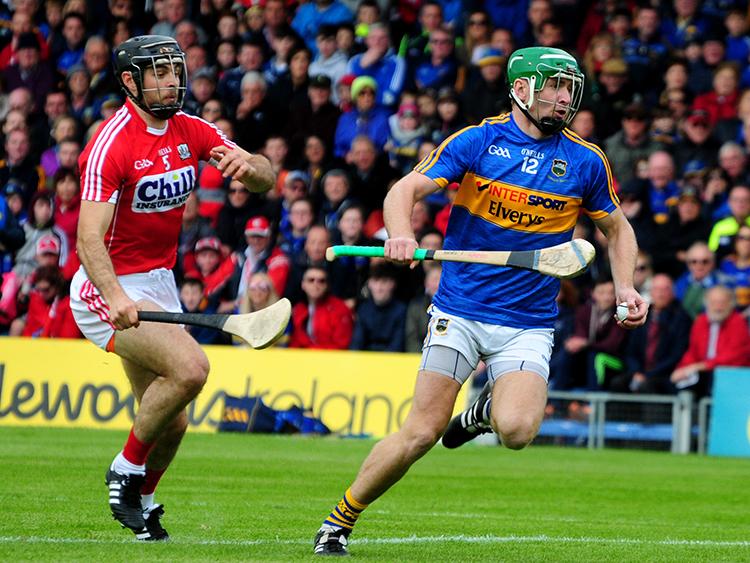 Senior hurling manager Michael Ryan told the media following the four-point defeat (1-26 to 2-27) suffered at the hands of Cork in Sunday’s dramatic Munster Senior Hurling Championship quarter-final that Tipperary have “lots of soul searching to do”. And, the Upperchurch-Drombane man hinted that the club fixtures schedule may well have impacted on the performance of the Tipperary players at Semple Stadium.

“Look, this is Cork lads. This time last year we were here and we were saying that they were not themselves. But I will tell you that they are back and I think that we can take that as a certainty. They go through into the Munster semi-final and they play Waterford. I think it’s going to be a very interesting year. I love to be right sometimes, but I told you fellas last September that next year was going to be a fantastic year for hurling. So, it is. Our lot now is that we have to find ourselves a new route and, look it, the challenge is ours. We have lots of soul searching to do,” Michael Ryan said.

Ryan, who guided Tipperary to a famous All-Ireland success in 2016, admitted that Cork performed admirably and deserved to progress to a semi-final against Waterford.

“I think that is a very fair summation of it. We would not have been happy in terms of how we did play, but I thought it was a cracking game of hurling. And, to be fair to Cork I thought they were excellent. It was a fine spectacle and the scores were absolutely flying in for both sides. We went in at parity at half-time, but the big deposits, the goals, and the second goal really put that little bit of daylight (between us). I thought Cork’s energy trumped us a little bit, particularly in the middle third. I just thought that they had a lot of ball and they seemed to have fresher legs,” Michael Ryan added.

“I just thought that the energy that was in that Cork team today was as good as we have come up against and anything that we have seen. I think the signs were there - we certainly saw them. Maybe they didn’t find that consistency throughout their league, but they certainly came out all guns blazing there today. Yeah, we were in it and we were within a point or two of them for most of the time - it seemed to ebb and flow. But they seemed to have the greater energy and, probably, hunger,” Michael Ryan said.

“There are a couple of facts that absolutely need to be confirmed here. We have a super bunch of fellas down there (in the dressing room). They care a huge amount about Tipperary hurling. They didn’t do anything wrong here today; they just came up against a really, really good Cork team. And, we were not sharp enough. So, we have work to do, but, look, I am not shocked,” Ryan admitted.

When asked to asked to explain why his side was “not sharp enough” Michael Ryan explained that the schedule that his players were exposed to in recent weeks may have had an impact on their performance.

“This is by no means an excuse, but four weeks ago we got beaten by Galway and my point about it being that we had eight games in ten weeks. We immediately turned around and for the bulk of our fellas they had another two games - competitive club games - in the intervening four weeks,” Michael Ryan explained.

“Every county has got a unique situation, but we have certainly got something that we need to look at in terms of (asking) are our boys allowed enough time in terms of preparation? And, it’s a very delicate balance between club and county. We have got to be fair to everybody here, but, for me going home, I am just concerned for our boys that they have been on the go and on the go and, to me, they didn’t look fresh out there; fresh enough out there.”

And, Michael Ryan also revealed that he was concerned about the general wellbeing of his squad of players prior to this contest. Indeed, the Upperchurch-Drombane man was concerned to such a degree that he cancelled a recent training session in order to provide his squad with a break.

“I was concerned when I saw the fixture list and that’s not an excuse. I can’t emphasise that enough to you - it’s not an excuse, but I do feel for these fellas. We pulled a session last week, which would have been down as a work session for ourselves, purely because of what we felt we were seeing in terms of (training) load on the boys. Every county team are measuring in terms of fatigue, rest and all of that kind of thing for their team. And, everyone makes adjustments, but that one would have been in the back of my mind. It was a very fast lead-in time to this.”

Tipperary will begin their All-Ireland championship campaign on Saturday, July 1st when the defending champions take a step through the back door.

In all the eight counties beaten in the quarter-finals and semi-finals of the Leinster and Munster provincial championships enter the All-Ireland hurling qualifiers alongside the Christy Ring Cup champions.

In the qualifier preliminary round the Christy Ring Cup champions meet a loser from the Leinster quarter-finals. Then the eight remaining teams contest round one of the qualifiers with three matches between Leinster and Munster opposition ensured where possible on Saturday, July 1st. The four winners of those games then face off in round two on Saturday, July 8th with a place in the All-Ireland quarter-finals up for grabs (Sunday, July 23rd) against the respective defeated provincial finalists.

“The point about this game here is that this was a cracking game of hurling out there today,” Michael Ryan revealed on Sunday.

“We came up short, but Cork were excellent. We have a little bit of work to do and we now find ourselves on a very scenic route. God only knows who the opposition will be and when,” Ryan added.

Tipperary, of course, fought back from losing out to Cork in the opening round in 2010 to win an All-Ireland title via the qualifier route, but manager Michael Ryan was not eager to draw comparisons between then and now.

“Look, that’s the challenge. I wouldn’t be too keen to draw too many parallels. We got a ten-point beating that day (v Cork 2010). This was a real game of hurling out there today. There wasn’t a gulf in class or anything like that going on there, but I thought that Cork trumped us for that middle third energy and intensity. I thought that they were really sharp all over the field to be honest,” Michael Ryan said.

“Look, they are a top class side lads and I think that they have worked in the bit of youth that they needed to work in. And, being honest I think that they are a match for anybody that’s out there. I think the summer is going to get going from now on, but not for us in Munster,” Ryan added before revealing that the injury suffered by corner-back Cathal Barrett did not “look good”.