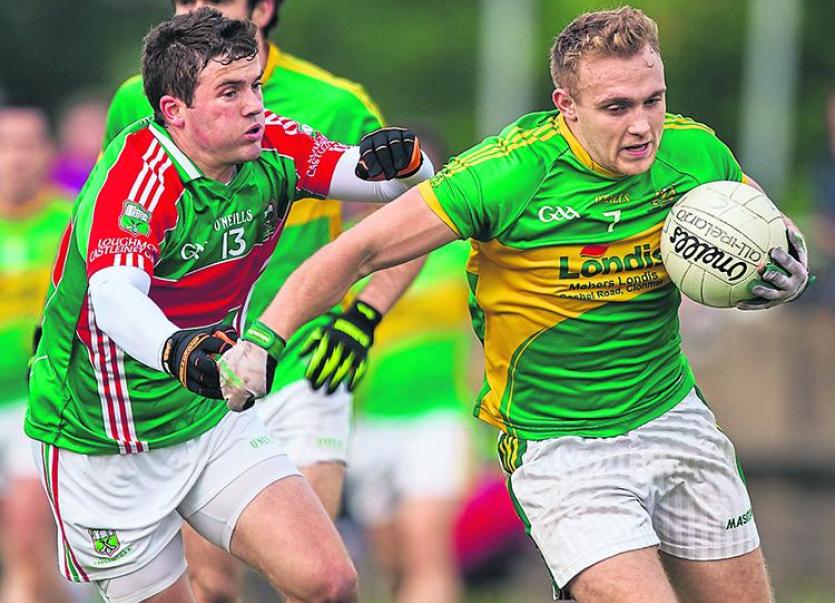 Killenaule, Clonmel Commercials and Moyle Rovers have set the early pace as the group stage of the County Senior Football Championship this week started to take real shape - two rounds have now been played and the third round is scheduled to take place on June 16th-18th with the priorities of the respective clubs now neatly carved out.

Killenaule lead group one on four points thanks to their 2-22 to 2-9 win over Drom & Inch on Tuesday evening - Killenaule led that contest 0-13 to 0-5 at the break. Meanwhile on Tuesday JK Bracken's stormed back from nine points down to beat Kilsheelan-Kilcash 1-14 to 2-10 in an incident-packed encounter.

In the third round Drom & Inch face Kilsheelan-Kilcash on Friday, June 16th in Leahy Park, Cashel (8pm) - Drom have two points, but Kilsheelan-Kilcash are rooted to the bottom of the table on zero. A win for Kilsheelan is vital here while Drom & Inch, if they can get some significant names on the field of play, could well book their place in the knock-out stages. Meanwhile on Saturday, June 17th Killenaule face JK Bracken’s in Leahy Park, Cashel at 8pm - JK Bracken's (two points) are still in with a shout here and will be hoping that Killenaule take their eye off the ball.

Moyle Rovers lead group two on four points and in the final round face Fethard (one point) on Friday, June 16th in the Clonmel Sportsfield (8pm). Meanwhile on Saturday, June 17th Arravale Rovers (two points) take on Aherlow Gaels (one point) in Bansha (8pm). It's all to play for here - one would expect Moyle Rovers to beat Fethard meaning that the winner of the contest between Arravale Rovers and Aherlow Gaels will progress.

On Wednesday night in Leahy Park, Cashel Loughmore-Castleiney beat Galtee Rovers-St Pecaun 2-14 to 1-8 - the defending champions led 1-7 to 1-4 at the break. Meanwhile Éire Óg Annacarty made an encouraging start to their campaign when beating Ardfinnan 0-13 to 0-11 - Ardfinnan led 0-7 to 0-6 at the break.

On Wednesday evening competition favourites Clonmel Commercials beat Ballyporeen 1-19 to 0-7 having raced into a 0-10 to 0-4 lead during the opening half. But in Cahir Upperchurch-Drombane upset the form book when registering a rousing 3-13 to 3-9 win over their hosts - the home side trailed 0-6 to 2-8 at the break and now find themselves rooted to the bottom of the table on zero points. Clonmel Commercials top group four on four points while Upperchurch-Drombane and Ballyporeen give chase on two each.

Both games in round three take place on Saturday, June 17th when Upperchurch-Drombane face Clonmel Commercials in Leahy Park, Cashel at 6.30pm while in Ardfinnan Cahir take on Ballyporeen at 8pm - it is, as they say, all to play for here.