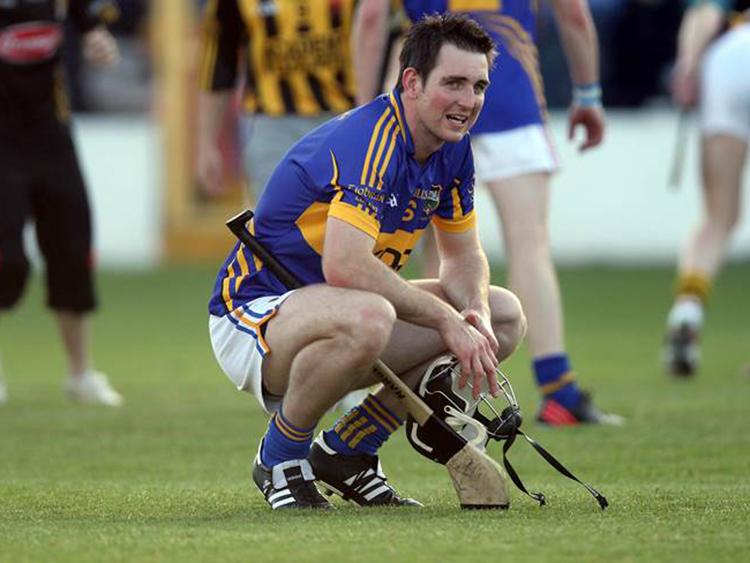 Former Tipperary star Conor O'Mahony was in terrific form for Newport this evening.

Despite trailing by six at the break (0-4 to 0-10) Newport fought back manfully in the second half and closed the gap to one (1-9 to 0-13) entering the final quarter. Roscrea, however, clung on and scooted away from their opponents in injury time thanks to a Shane Fletcher goal.

For Roscrea Evan Fitzpatrick and Conor Sheedy made a key difference while Newport’s Conor O’Mahony gave an exhibition when man marking the highly-talented Sam Conlon.

Playing with the wind Newport took the lead in the third minute thanks to Eamon McCormack, but Roscrea responded with two Jason Fitzpatrick frees to wrestle the initiative in the direction of Ger Fitzpatrick’s men.

Darragh Carroll (free) and Evan Fitzpatrick then traded points before a great effort from Peter O’Sullivan tied the game in the 12th minute at 0-3 apiece.

Newport survived a close shave in the 14th minute when ‘keeper Michael Flannery and then Conor O’Mahony saved from the raiding Jason Gilmartin and Evan Fitzpatrick respectively.

However, Jason Gilmartin and Shane Fletcher flashed over eye-catching points in the 18th minute to present Roscrea with a 0-5 to 0-3 advantage. Darragh Carroll responded with a converted free for Newport, but Roscrea closed out the half with points from Evan Fitzpatrick (two), Shane Fletcher, Jason Fitzpatrick (free) and Conor Sheedy to lead by six at the break. Indeed, Roscrea may have led by a more significant margin had Michael Flannery not saved a Jason Gilmartin shot in the 28th minute (0-10 to 0-4).

Two Darragh Carroll points (one free) roused Newport during the opening minutes of the second half before Aidan Moloney flicked home a one-handed effort from close range in the 38th minute (1-6 to 0-10).

Seconds later Sam Conlon wriggled away from Conor O’Mahony in the 39th minute to land a superb long-range point in response, but Newport were hurling well now and struck for another point (Pa Ryan) to close the gap to one.

The tit-for-tat nature of the second half persisted for the following thirteen minutes - Steven O’Connor, Pa Ryan and Darragh Carroll (two, one free) added to the Newport tally while Davin Flynn, Jason Fitzpatrick (two frees) and Evan Fitzpatrick ensured that Roscrea led 0-15 to 0-11 by the 51st minute.

Evan Fitzpatrick notched the game’s finest score in the 49th minute when landing a mighty effort on the run and off his left from long-range before the centre-forward made another telling contribution in the 53rd minute when setting up Conor Sheedy for a left-handed effort which forced his side two clear (0-16 to 1-11).

Newport required a goal and came agonisingly close to creating a solid opportunity on a couple of occasions - most notably in the 62nd minute when Pa Ryan snapped a ball and was held up en route to goal. Referee Seán Everard penalised Ryan for over-carrying and Roscrea, given the circumstances, were reasonably fortunate to avoid conceding a 21-yard free if not a penalty.

A minute later Shane Fletcher scooted down the field to score a breakaway goal which sealed the win for Roscrea before Daryl Ryan landed a mighty long-range free from deep inside his own half.

Both Roscrea and Newport now have two points to their name in group one with a round to play in the Séamus Ó Riain Cup and will watch with interest as Toomevara and Ballingarry face one another in Holycross on Sunday - the Greyhounds will be favoured to win that one and lead the group one four points.