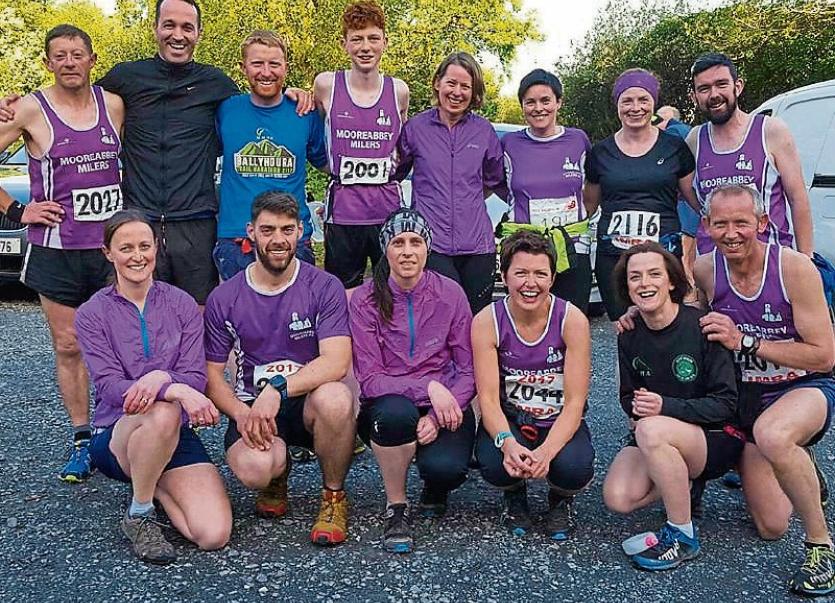 In the week that Mooreabbey Milers AC said goodbye to our very good friend and clubmate, Michael Curley Cunningham, we would like to thank all those who paid their respects and paid tribute to such a wonderful athlete and person. Again our sympathies go to his family and partner.

Many races around the province held a moment of silence before the start for Curley. At the MMRA race on Wednesday there was a rapturous round of applause for the great man before the start of the Lough Curra race in the Galty mountains. Runners wore club colours and black armbands for example in remembrance of Curley and he was in their thoughts as they made the tough ascent to the lake and as they descended with speed and enjoyment, as Curley would have done, to the finish line.

Fifteen Mooreabbey Milers members took part in this race which made its debut on the MMRA calendar. Great running from all, including Kevin Lenihan, Ewan Cunningham, Willie O'Donoghue, Mary-Louise Ryan, Patrick Holian, Damien Holian, Paddy Bourke, Louise Rennie, Martina Moloney, Pat Hartigan, Niamh Blackburn, Mandy Parslow, Aoife Courtney, Jo Drea and Larry O'Grady. Well done to Robert Cunningham and Tricia Ryan for organising the race and to the many volunteers also. The ravenous runners were rewarded with tea and sandwiches in the Coach Road Inn afterwards where stories and memories of Curley were swapped. Very generous donations were made on the night for Milford Hospice and profits from the race will also go to Milford Hospice.

Kilmallock AC hosted the third race of the Ballyhoura Active Series on Friday 19th last. This was a very good 5 mile course, well organised, with six Mooreabbey members competing. Congratulations to Kieran Lees who was 9th 27.37, Ewan Cunningham 2nd junior in 32.40, Tricia Ryan, Louise Rennie, Ann Cummins and John Frazer. Kilfinane AC will host the next race in the series on Friday June 9th at 8pm. It will be a flat 4 mile course.

A navigation course for interested club members was held on Saturday 20th in Lisvernane. The very experienced Michael Moroney helped participants get to grips with map and compass reading which will be essential during the upcoming Galty Crossing on July 2nd. All agreed that they learnt a lot and enjoyed the practical lesson out on the mountains as well as the class based lesson.

Kieran Lees and Tricia Ryan traveled to Ballhooly in Cork on Friday 26th to take part in the John Hartnett 10k hosted by Grange Fermoy AC. This was a nice flat route with just a few pulls along the way. Kieran Lees ran a stormer of a race to take first place in a time of 35.21, Tricia Ryan was happy with her race also in 52.21.

The very best of luck to all from the club who will take on the mighty Carrauntoohil in Kerry this Saturday as part of the Munster and Irish Championships.

Mooreabbey Milers train every Tuesday and Thursday in the community field, Galbally, at 7pm.