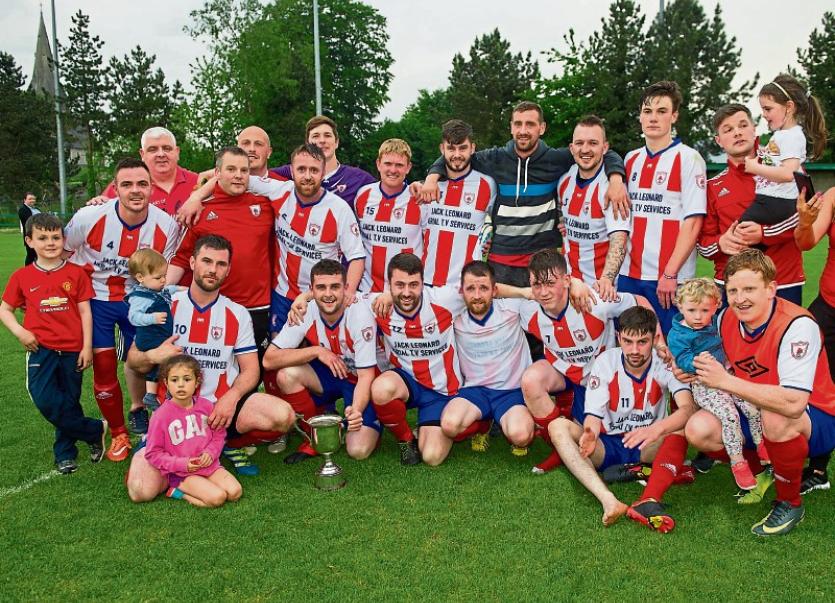 There was an element of jaded familiarity to the final TSDL league game of the season on Friday last evening in Cooke Park, as Bansha Celtic and Glengoole United met once again.

It was  the seventh meeting of the sides this season, and it  finally decided which of the two already promoted teams would go up to the Premier League as champions.

The game started out well enough and Glengoole United had the first chance when a snap shot from Ian Ivors scraped the top of the Celtic bar before going over.

After that the game settled into a lull until just before the half hour, a ball from Michael Rafter saw Alberto Martinez beat the offside trap and he fed an onrushing Rafter who fired against the crossbar from five yards out, and the ball was scrambled away to safety.

Stung finally into action, Celtic made some inroads and had their first shot on target when a Niall Daly shot tamely into the keeper’s hands ten minutes before the break.

Just when it  looked like the game was going to go to the break scoreless the game’s only goal finally came.  Two minutes into injury time a corner for Bansha Cekltic found the head of  Niall Daly and he headed home with almost the whole Glengoole United defence  rooted to the spot.

Buoyed by this the Celtic players took control for much of the second period, even though they never really tested Paul Hanrahan in the Glengoole goal.

On top of that, Glengooel United were reduced to long range efforts with perhaps the best chance of the half going to Celtic in the  fifth minute when Tony Egan cracked an effort off the crossbar and Darren McGrath almost converted on the follow-up.

With three minutes left, Glengoole United got what proved to be their last chance as they worked a very smart free kick routine and Michael Rafter slammed a ball at the Celtic goal, but Rob Doyle was equal to it, and he scrambled the effort away to safety.

At the end, the Celtic fans were exuberant to see their charges lift two titles in a week and set themselves back up for a return to the Premier League next year.