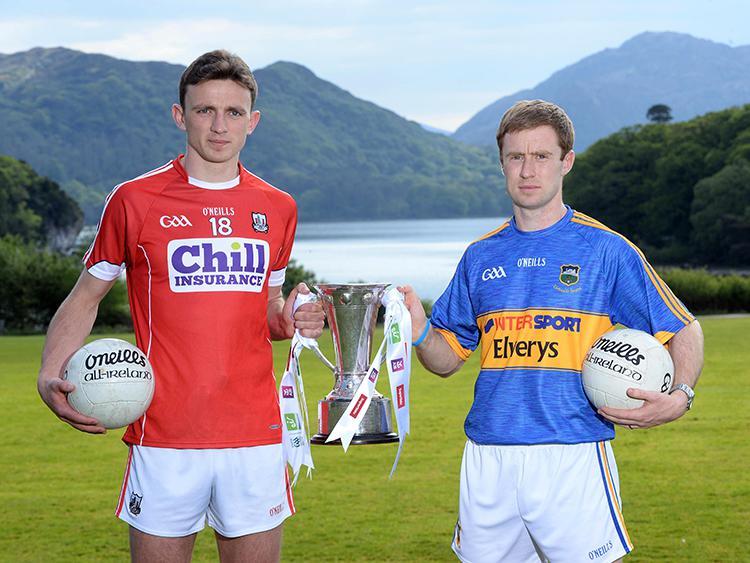 There is no doubting the fact that the Tipperary footballers are up against it when they face the Rebels in a Munster Senior Football Championship semi-final at at Páirc Uí Rinn, Cork on Saturday, June 10th (5pm).

A series of injuries and, of course, the suspension of Evan Comerford have hamstrung preparations somewhat, but you can still bank on this group of Tipperary footballers to perform and come out fighting.

Earlier this year the Tipperary team proved that they have the stomach for the fight.

Following a mixed run of form Liam Kearns’ men lost a critical contest with Louth at Semple Stadium, Thurles. Tipperary were told they had missed their chance of promotion, but Tipp proceeded to beat Armagh at the Athletic Grounds, sealed their place in division two and then saw off Louth comprehensively in the league final (3-19 to 0-19).

“It has been a difficult period to manage, but we are coming off a very successful league campaign that ended with us being promoted to division two and also saw us win the league. And, we have responded to adversity every time that we have faced it.

“After losing to Louth everyone thought we had blown our chance of promotion, but we went to the Athletic Grounds in Armagh and we still managed to come out of Armagh with the win that we needed to get promoted.

“There are obstacles put in the way of Tipperary football all the time and in fairness to this team and to this group of players they have shown tremendous resilience to overcome those obstacles. And, I would say that this is another huge obstacle that we have to face considering the circumstances that are there.

“But I have no doubt that the team will perform - they love a challenge and they will perform. And, we have got to see where that performance can take us.”

This Tipperary team, however, are far from finished. When the championship draw was made Liam Kearns declared that his goal for the opening quarter of 2017 was to earn promotion to division two and add significant depth to his panel. And, true to his word Kearns has managed to achieve both feats.

The Kerry man introduced seventeen new players to the senior squad this year and presented twenty-seven different players with game time during the division three league campaign - that determination to develop the senior panel may just pay a dividend on Saturday at Páirc Uí Rinn.

Brian Fox’s performance against Cork in the 2016 Munster semi-final had all Tipperary people talking around the fireplace when the half-forward starred in a story so sweet your teeth just hurt thinking about it.

Fox created the goals for Conor Sweeney and Michael Quinlivan before bagging one of his own in the 60th minute to help the Premier County into a 3-13 to 1-10 lead. The Rebels, of course, responded with a 1-6 blast to tie the game with a minute to play only for Kevin O’Halloran to land two placed balls in injury time which sealed a famous win.

Tipperary’s preparations for Saturday’s contest have been restricted a little, but Brian Fox does not want to hear anyone associated with the Tipperary camp use such complications as an excuse. Brian Fox expects Tipperary to perform irrespective of the circumstances.

“I don’t like the idea of anyone having an excuse (not to perform). There are plenty of excuses there for us if we choose to use them,” he said.

“We have known for quite some time about the injuries and that fellas were doubtful so we have been ploughing on without them,” Brian Fox added.

“Sometimes you can use it as motivation when you feel that people are writing us off and if people don’t believe that we are going to do anything because now we have an excuse. We have proven those people wrong time and time and time again.”