Coming Up: Holycross FC prepares for a night at the dogs 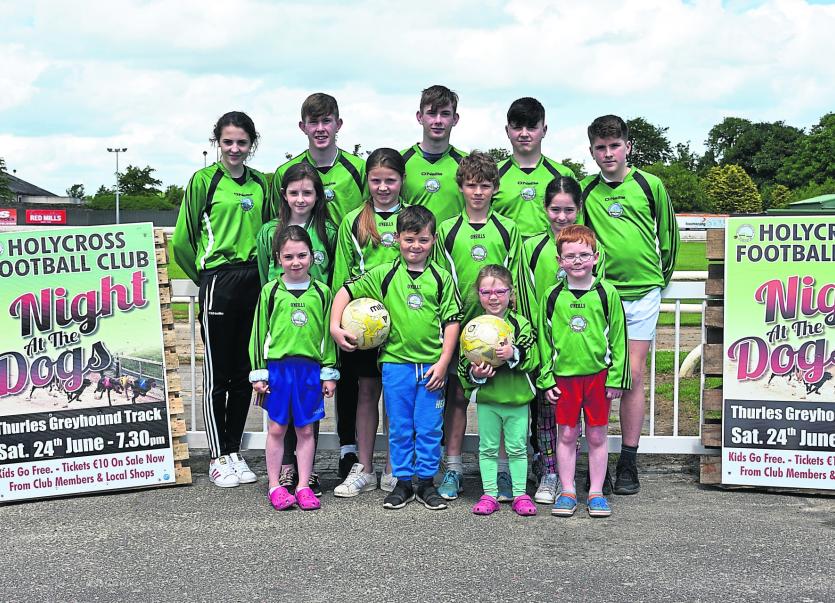 Members of Holycross FC getting ready for the big night at the dogs.

The club is celebrating 25 years in existence and has grown to be one of the finest soccer clubs in the region.

Holycross FC for one night only are hosting a “Holycross Night at the Dogs” on Saturday the 24th of June. This event promises to be a family event where the emphasis will be on fun, fun, fun in Thurles Greyhound Stadium.
Support for this event has so far been tremendous, with strong ticket sales. The Novelty race adds the fun factor, a relay Dribble race which will include 4 team members, one being over 18. It promises to be a fun, social night out for all the family with kids (U16’s) free.
For sports clubs to achieve the highest of standards, fundraising is essential. The funds help to maintain and invest in equipment and address the upkeep of the club facilities. When your club has ambitious plans for its development, this brings the fundraising onto another level. Holycross Football Club is in the process of getting a grant, for pitch development.
As the youngest club in the community of Holycross, and the fifth largest in North Tipperary, with a substantial number of playing members, it has taken giant steps in recent years. From humble beginnings in Breda Ryan’s kitchen, playing in the infamous “Jurassic Park” to having FAI legend John Delaney open our new clubhouse, HFC are proud of their club’s achievements to date.
Founded in 1992 by visionaries Tomas Ryan, Michael Maher, Philip Ryan & Alan Quinlan, the focus at that stage was to have one junior team. The players consist of male & female underage, youths, minors and senior teams. Since opening the clubhouse, in the last season we have won U12 boys shield, U12 girl’s league, U14 boy’s plate & league runners up, NT&DL and the youth’s league and cup runners up.
This wouldn’t be possible without the dedication from team members. Gary Delaney is now on the U16’s squad for Ireland. We have players on the North Tipperary School Football League, this includes the U12 Girls Academy Squad; Roisin Dwan, Holli Maher, Ciara Ryan, Aoife O'Reilly, Caoimhe McGrath. The U11 Boys; Tony Maher and Jack Lahert. U12 Boys; Pierce Briody who also has made the regional squad in UL.
Making regional squad in U13 Boys are, Tadhg Gould and Eoin Craddock, who has made the regional squad in UL. U14 Boys Toby Lambe, who is also on the Kennedy Cup squad and manic regional squads on a continued basis.The HFC, has hosted two FAI Coach 3 Coach Education courses during the season including our own FAI PDP 1. It’s no wonder that the trophy cabinet is bursting with silverware and awards.
The feedback has been fantastic from visiting teams on the high standard of the freshly painted clubhouse with its numerous changing rooms, referees room, showers, meeting rooms and viewing balcony. With issues such as mental health and obesity constantly in the media, the high standard of sports facilities ensures that Holycross as a village is an attractive location for any young sports fanatic. HFC would also like to acknowledge the continued support of its members, the local community and all sports enthusiasts.
Holycross Football Club is looking forward to an exceptional night of fun and entertainment on June 24th. Supporters of this fundraiser should purchase tickets in advance by emailing holycrossfc@mail.com, alternatively find in local shops or text 086 602 1978. Remember ‘Kids go Free’ applies up to under 16’s.