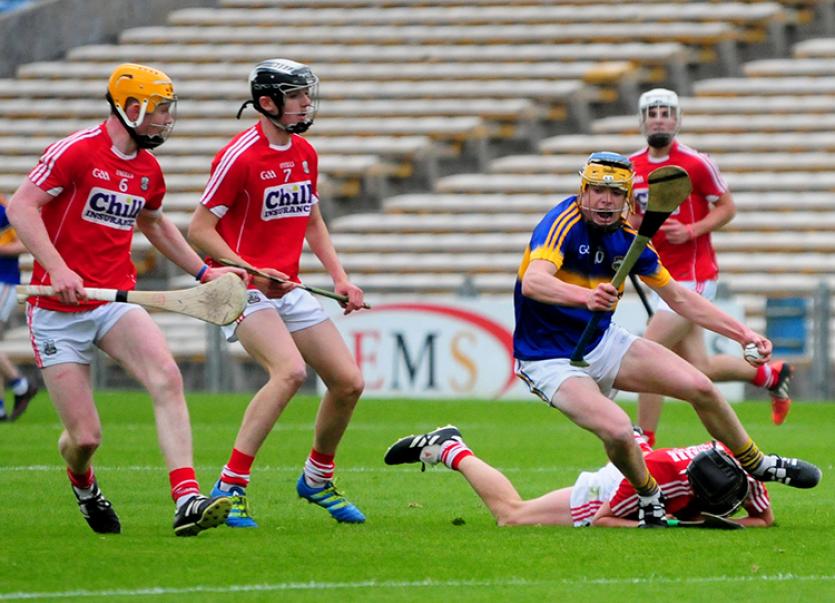 The Tipperary and Cork minor teams conjured an extraordinary contest at Semple Stadium, Thurles on Thursday evening. After a thrilling game Tipperary led by three points in the dying seconds of extra-time, but Evan Sheehan’s last gasp goal rescued the Rebels and forced a replay. The hurling was superb and the drama excruciating as supporters chewed their finger nails all the way to Kinsale. The Electric Ireland Munster Minor Hurling Championship semi-final replay is scheduled to take place on Saturday, July 1st at Páirc Uí Rinn, Cork (1pm) which would leave the players with less than forty-eight hours to prepare. There is still hope, however, that common sense will prevail and the replay will take place on Monday, July 3rd (7.30pm) at Páirc Uí Rinn.

The context associated with this Munster semi-final needs to be considered before the magnificence of this Tipperary performance can be assessed accurately - this Rebel team have been groomed to lead the hurling renaissance on Leeside. At under-14, under-15, under-16 and under-17 level Cork have illustrated their pedigree with a series of extraordinary displays, but on Thursday evening the Tipperary lads matched the Rebels stride for stride in front of a 4,245-strong crowd.

After a ropey start Tipperary trailed by three points (0-4 to 0-7), but wrestled the initiative away from Cork and led 1-7 to 0-8 at the break. The Premier lads pushed on and enjoyed a 1-12 to 0-9 advantage entering the final quarter only for Denis Ring’s Cork team to rally, restrict Tipperary to a single score during the closing twenty-three minutes and force extra-time (1-13 to 0-16). A Darragh Woods goal propelled Tipp into a three-point lead in extra-time, but Evan Sheehan lashed home a late free to earn the Rebels a reprieve.

Tipperary had heroes in every line - Michael Purcell, Jerome Cahill, Kieran Breen and Craig Morgan were exceptional in defence. Paddy Cadell proved himself a distinguished leader in the middle of the field, Conor Bowe was an outstanding ball winner at half-forward, Jake Morris showed flashes of real class, Anthony McKelvey shone out at full-forward and Darragh Woods made a significant contribution once introduced as a substitute. And, outside of such individual displays the collective performance of the Tipperary lads and their determination to work for each other reflected superbly on everyone associated with the team.

The sides traded points early on before three points in succession from Dáire Connery (two, one free) and Brian Turnbull helped Cork into a 0-4 to 0-2 lead by the tenth minute.

Tipperary created a goal-scoring opportunity in the 12th minute when Paddy Cadell set up Anthony McKelvey, but the full-forward fired across the face of goal and wide from a tight angle. A McKelvey free soon after closed the gap to one, but Cork proceeded to out-score the home team 0-3 to 0-1 to force themselves into a 0-7 to 0-4 lead by the 18th minute.

Cork were playing into a stiff breeze, but irrespective of the playing conditions the Rebels were on top and Brian Turnbull was threatening to take over. Just then, however, Jerome Cahill was switched onto the Douglas corner-forward and a glimpse of light emerged in the 25th minute when the Kilruane man beat Turnbull out to a ball. A small thing, but a big thing.

Tipperary got going with points from Paddy Cadell and Anthony McKelvey (free). In the 20th minute Jake Morris had played Niall Hoctor in, but the St Mary’s man was hooked en route to goal. Tipperary, however, struck for a vital three-pointer in the 28th minute when a superb Conor Bowe grab featured during the built-up to a Ray McCormack strike. Seconds later Paddy Cadell won a Cork puck-out, ran at the heart of the Rebel defence and forced Tipp into a 1-7 to 0-7 lead. The home side had now fired 1-3 without reply, but Cork brought the first half scoring to a conclusion when Dáire Connery closed the gap to two (1-7 to 0-8). 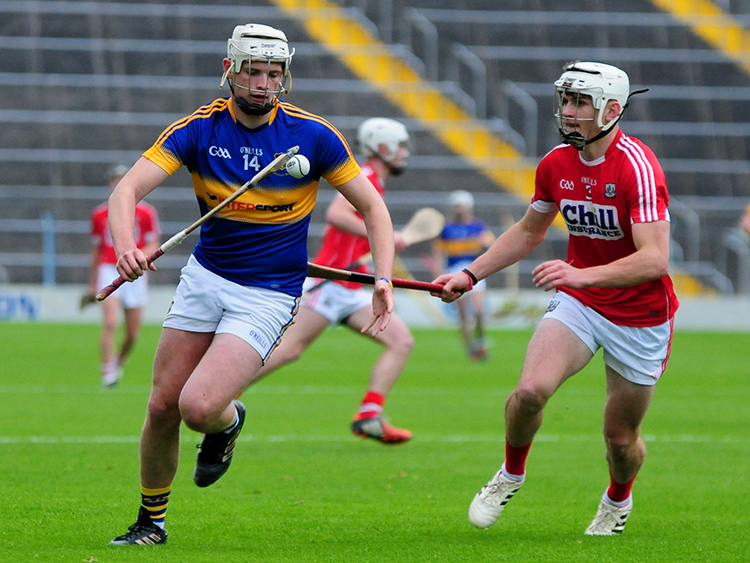 Tipperary made an encouraging start to the second half when two Anthony McKelvey efforts (one free) forced Liam Cahill’s hard-working men four clear. Brian Turnbull wriggled away from Jerome Cahill to respond for Cork, but Tipperary were hurling well and working incredibly hard. Indeed, a number of eye-catching tackles, hooks, blocks and turnovers featured in a rousing five-minute period when Tipperary stretched their lead to six points thanks to two Anthony McKelvey frees and a Jake Morris strike from play - Tipp led 1-12 to 0-9 by the 42nd minute.

Considering the pedigree of the Cork side and the strength of the prevailing wind a dominant Rebel period was expected and it materialised during the closing quarter of this contest. Points from Brian Turnbull (two, one free) and Diarmuid Lenihan cut the deficit faced by Cork to three points before Tipperary created a terrific goal-scoring opportunity in the 55th minute - a Ray McCormack effort was smothered before Anthony McKelvey found the side netting.

Four minutes of injury time were signalled as Cork came in waves at the tiring Tipperary players - Dáire Connery and Brian Turnbull drilled over late frees before Robert Downey landed the equaliser in the 64th minute. The Tipp lads, however, were not inclined to throw in the towel. And, in the dying seconds Paddy Cadell won a turnover in the middle of the field and fed Anthony McKelvey - the full-forward, in turn, picked out Jake Morris and the Nenagh Éire Óg star flashed over what looked like a winner. Referee Rory McGann, however, had other ideas and allowed Cork enough time to craft an equaliser which arrived courtesy of Robert Downey from the resultant puck-out in the 65th minute (1-13 to 0-16). 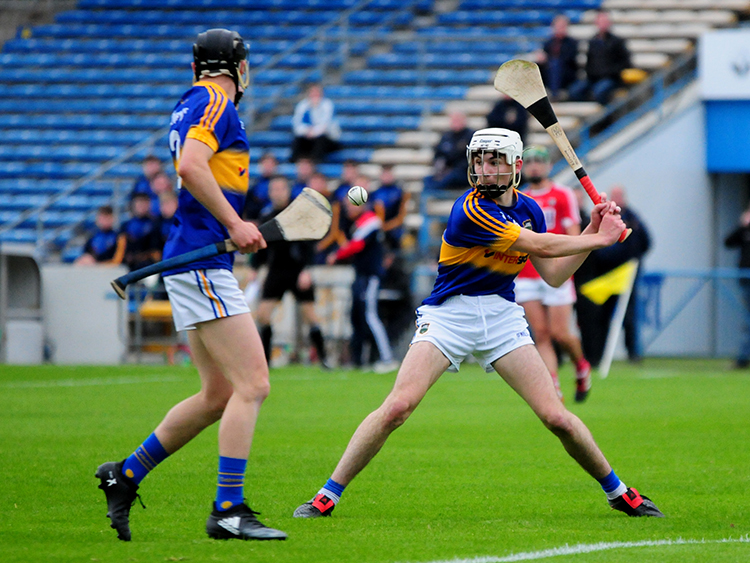 Cork played with the wind in the opening half of extra-time, but Tipperary defended like men possessed. Two sensational hooks from Kieran Breen featured before Paddy Cadell set up Darragh Woods for the lead score. Woods converted a free soon after, but Cork hit back with efforts from Declan Hanlon and Dáire Connery (free) - draw game: 1-15 to 0-18.

Immediately after the break Cork snuck two clear thanks to placed balls converted by Dáire Connery and Brian Turnbull, but Tipperary hit back when Billy Seymour won a ruck and set up Darragh Woods for a cracker. Then, in the 78th minute, Paddy Cadell opened up the shoulders and launched a massive effort at an equaliser - Cork ‘keeper Ger Collins blocked the effort out and following a scramble Darragh Woods scrambled home what looked like a hugely significant goal (2-16 to 0-20).

Cork hit back with a Brian Turnbull free, but Conor Bowe conjured a sensational grab soon after, was fouled and Woods converted. Then, in the 82nd minute, Willie Barry forced Tipperary three clear (2-18 to 1-21).

Two minutes of injury time were signalled, but in the third Brian Turnbull was fouled for a free which Evan Sheehan drilled home from twenty-three yards. Extraordinarily Tipperary worked the ball into the hand of Willie Barry in one final attack, but the Cork defence scrambled back superbly and the Cappawhite man was denied a clear shooting opportunity to claim a dramatic winner for Liam Cahill’s men.