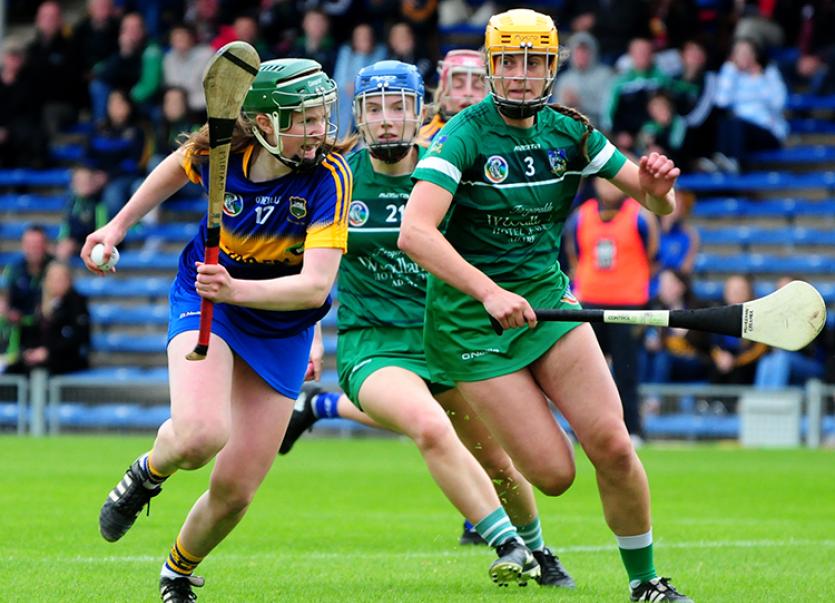 A second successive defeat in the group stage of the Liberty Insurance All-Ireland Senior Camogie Championship has left Brian Boyle’s Tipperary team with it all to do - having previously lost out to Cork the Premier County are now rooted to the bottom of group two on zero points with games to come against Wexford and Offaly.

It will be of little consolation to the Tipperary Camogie team that they played their part in a terrific contest at Semple Stadium, Thurles on Saturday afternoon. Although the game featured thirty-eight frees the battle proved an enthralling one with Megan Ryan, Orla O’Dwyer, Keely Lenihan, Ereena Fryday, Mary Ryan and Cáit Devane shining out for the home side.

In the opening half Tipperary opted to employ a sweeper when playing into a stiff breeze and thanks to goals from Cáit Devane and Roisín Howard Brian Boyle’s team trailed by just three points at the break (2-5 to 0-14).

Tipperary reverted to an orthodox set-up for the second half, but Limerick, who were inspired by player of the match Niamh Mulcahy, stood up to the challenge posed and managed to keep their noses in front until an Orla Curtin goal forced them four clear on the hour mark.

Tipp hit back when Cáit Devane rifled home a late free, but, cruelly, the Clonoulty-Rossmore star steered a free to tie the game wide in the 62nd minute before Judith Mulcahy sealed the Limerick win with another placed ball in the 64th.

On Saturday Cork beat Wexford 3-18 to 0-9 meaning that the Rebels now lead group two of the Liberty Insurance All-Ireland Senior Camogie Championship with Tipperary still enjoying an outside chance of progressing to the knock-out stage should they register wins over Wexford and Offaly.

Four converted frees featured in the opening five minutes with Niamh Mulcahy converting three to present Limerick with a 0-3 to 0-1 lead. A terrific Megan Ryan effort doubled the Tipp tally, but the Shannonsiders opened a four-point gap (0-2 to 0-6) thanks to efforts from Caoimhe Lyons, Rebecca Delee and Niamh Mulcahy (’50).

In the 12th minute Orla O’Dwyer grabbed a ball and picked out Cáit Devane with a pin-point delivery and the full-forward delivered a composed finish. Five minutes later Tipperary struck for a second three-pointer when Keely Lenihan’s smart cross-field pass found Nicole Walsh who, in turn, picked out Roisín Howard and Cahir’s finest converted from close range (2-2 to 0-6).

Limerick responded with points from Deborah Murphy and Niamh Mulcahy (two, one free) to re-claim the lead (0-9 to 2-2) by the 21st minute.

Megan Ryan was fouled for a free which Nicole Walsh converted to tie the game, but thanks to two more Niamh Mulcahy efforts (one free) Limerick led 0-11 to 2-3 by the 26th minute.

Orla O’Dwyer demanded a save from Limerick ‘keeper Laura O’Neill in the 27th minute and Cáit Devane converted the resultant ’50 to close the gap to one. Another Niamh Mulcahy strike preceded a superb Cáit Devane free into the teeth of the wind from long-range, but Limerick closed out the half superbly with efforts from Niamh Mulcahy and Orla Curtin to lead by three (2-5 to 0-14) at the break. The Shannonsiders threatened to notch a goal in the 30th minute, but a superb Clodagh Quirke tackle denied a raiding Limerick forward.

Seven minutes elapsed before Orla O’Dwyer delivered a cracking point off her left. Orla Curtin hit back for Limerick before a brilliant Niamh Mulcahy free forced the Munster champions four clear (0-16 to 2-6).

Two Cáit Devane frees and a terrific left-handed effort from Orla O’Dwyer dragged Tipperary to within one of the visitors entering the final quarter (2-9 to 0-16). And, Tipp were left cursing their misfortune once more in the 44th minute when Limerick ‘keeper Laura O’Neill saved another shot from Orla O’Dwyer. The sides then traded efforts with a rousing point from Cáit Devane in the 51st minute leaving a point between them (2-11 to 0-18).

Tipperary’s Orla O’Dwyer grabbed a searching delivery in the 52nd minute, but dragged her shot across the face of Laura O’Neill’s goal and narrowly wide before Niamh Mulcahy converted a placed ball in the 53rd minute (2-11 to 0-19).

Orla O’Dwyer turned provider in the 55th minute when assisting Cáit Devane for another rousing score. And, with a point between them there was every chance of Tipperary edging this one. However, disaster struck in the 59th minute when Niamh Mulcahy’s ambitious shot dropped short and Orla Curtin conjured a spectacular volley to beat Tipp ‘keeper Orla McEniry (2-12 to 1-19).

Two minutes later Cáit Devane rifled home a placed ball to drag Tipperary back into it and when Megan Ryan was fouled for a free in the 62nd minute it appeared as if the Premier County had rescued the situation in a frantic finish. Cáit Devane had performed superbly all day, but on this occasion steered her strike narrowly wide before a Niamh Mulcahy free in the 64th minute sealed Limerick’s two-point win.