Wins for Mansfield and O'Doherty in Coillte 10k Dundrum 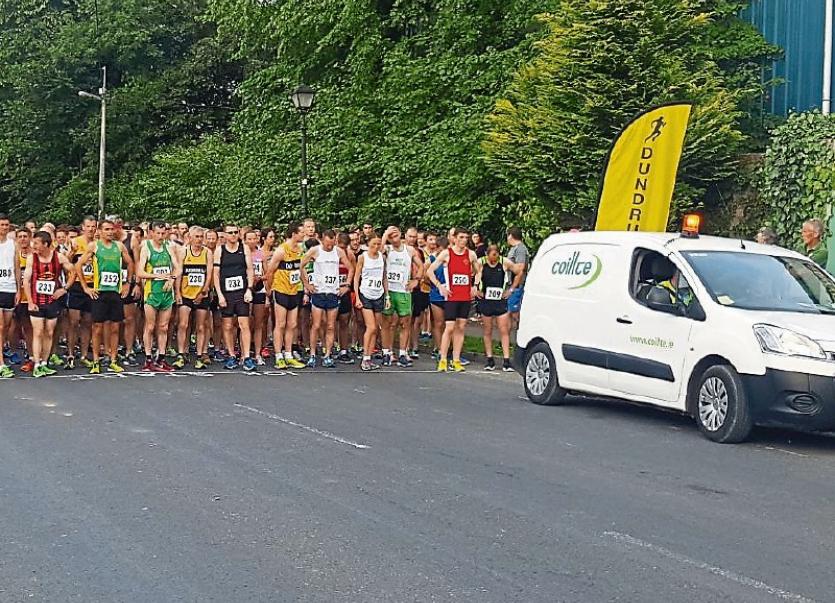 Last Wednesday 5th July the Coillte 10k road race was ran for the 32nd consecutive year along the roads around Dundrum.

A field of  270 athletes which included 23 juniors running the one lap 5k race went to the start line on a humid evening for running. Patsy Dorney Thurles Crokes AC who had celebrated his 80th birthday days before the race, blew the whistle to set the field on their way.

At 3k the light frame of Tipperary based but running for Clonliffe Harriers club in Dublin David Mansfield was out in front setting the pace. He was been chased by Colm Turner Limerick and James Doran An Riocht. Next we had two previous winners of the race Kevin Moore Dundrum who flew in from work in England 2 hours before the race to be with his club mates and Declan Moore from Bilboa. Nine times winner and Irish International Siobhan O’Doherty Borrisokane was leading the women’s race from Michelle Cox Newbridge with three Tipp girls Madeline Loughnane Thurles Crokes, Linda Grogan Dundrum, Aine Roche Clonmel joined by North Cork’s Grainne O’Callaghan in the battle for the first six prizes. Out onto the second lap and David continued to force the pace to come home a convincing winner in 32:03 to add a new name to the long list of winners since 1986.David also won the Tim Crowe trophy for been first Tipperary athlete across the line. Niall Shanahan Crecora came with a great second lap to take second in 32:22.Colm and  James also dipped under the 33 minutes for  3rd and 4th respectively. The two Moore’s Kevin and Declan completed the prize winners in 5th and 6th. All top six finishers from different clubs.

Siobhan O’Doherty came home a clear winner of the women’s race in 36:40 to set a record of 10 victories in the race a magnificent achievements watched by her proud parents Eamon and Agnes who have been coming to Dundrum to support her since she was running the Junior 5k race. Michelle made the trip from Newbridge worthwhile with a good run for second in 38:20 with Madeline 3rd in 39:04 and Linda keeping the home flag flying with a great run for 4th in a PB of 39:45.Grainne got the better of Aine for 5th and 6th respectively. As in the men all top six finishers were again from different clubs.

The master categories were hotly contested with three records broken on the night. In the mens Denis Shanahan Thurles Crokes made the trip to his mother’s home place to win the over 40 men in 33:54. Tony Reidy Portlaoise set a new course record of 33:45 in the over 45 category. While Dundum’s Dermot Hayes continued his great form  in winning the over 50 section in 35:17.Michael Moore continued a great night for the local club with victory in the over 55 section in 41:17.James Sullivan Tipp Town returned to break his own record set last year in 39:55 a super performance.

The Junior Women’s 5k was won for the second year in a row by Louise Stack Portlaoise in 19:47 with Tara McDonough making the long trip from North Down for second with a youthful Millie Kelly Dundrum having a great run for third. The Junior Men 5k was won by Fred Crowley Thurles Crokes in 17:46 followed by Kevin O’Grady Ashbrook Lawn with French athlete Alexandre Davy from the Ena Angers club third. Well done to all.