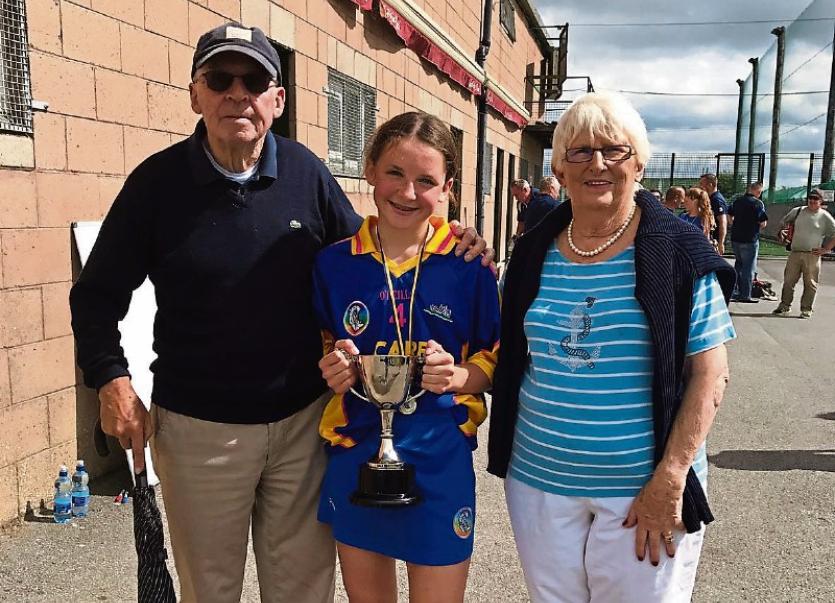 Daverns of Cashel U14 Camogie Blitz

It was certainly all go in Leahy Park and Cashel Community School on Saturday last with Cashel Camogie Club hosting a brilliantly run blitz.

Seven teams took part with one group of four and one of three, meaning plenty of games for all involved. When the groups had sorted themselves out it was all guns blazing for our finals played in Leahy Park.

First up was the Daverns of Cashel Trophy final with Fethard and Holycross doing battle. In the finish Fethard were just too strong for a gallant in defeat Holycross team.

It was then the turn of both group winners, hosts Cashel CC and Cahir CC to contest for the Daverns of Cashel Cup. This was a very good game of Camogie. Cashel playing with a first half breeze opened the scoring and soon held a 1-3 to no score halftime lead. The question was would this lead be sufficient enough now playing against the strong wind?

The second half saw Cahir quickly reduce the lead with a goal and a point as the Cashel defence worked brilliantly to stem the flow. Attack after attack was met with some excellent defending, hooking and blocking. The Cashel discipline was immense as was the skill levels as the girls held out to claim a superb and well deserved success. The entire panel were excellent all through and hats off also to Cahir who played their part in a fantastic final.

None of this would have been possible but for the hard work in the background organising such an occasion. To those that helped out in Leahy Park on both Friday evening and Saturday and those that brought food and refreshments a massive thanks. To Massimo Mazzola for the lovely hot food, this was again really appreciated. To Cashel King Cormacs for the use of their fantastic facilities and to Cashel Community School and the caretakers for having everything in top class condition. The referees for giving up their time and everyone that helped make this a brilliant day.

Thanks to Raymond Davern of Daverns of Cashel for sponsoring both the Cup, trophy and medal the club greatly appreciates this.

To bring proceedings to an end and in fitting fashion Raymond senior and Ellen Davern were on hand to present granddaughter and Cashel captain Ella O'Dwyer with the winning cup much to the delight of everyone in attendance. We will look forward to next years blitz already.

Our U13 team enjoyed a brilliant win over Kickhams last week to make it three wins from three games.

It was the manner of the victory that was pleasing as Cashel suffered a very heavy defeat to the same opposition in the U14 championship earlier in the season. But this time around the girls were full value for their 4-6 to 0-1 success. We now go onto the semi finals to be played over the coming weeks.

Our U16 team played Brian Borus in Leahy Park and just failed by one point in a very close encounter. The girls did play very well on the night and were unlucky not to come away with at least a draw. Cashel 1-7 Brian Borus 2-5. Next up is Fethard CC where only a win will suffice.