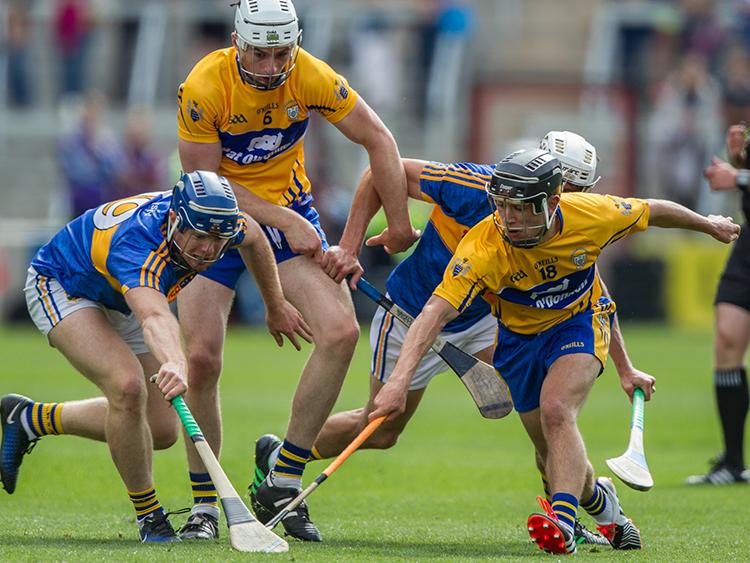 Tipperary and Clare pictured battling for the ball on Saturday in Cork.

Tipperary led by seven in the 55th minute, but in a devastating ten-minute surge Clare landed six points without reply with a classy Conor McGrath effort in the 65th minute reducing the Tipperary lead to one (0-23 to 2-16). All the momentum was now with the Banner, but Tipperary impressively wrenched the prevailing pattern of the game back in their favour before earning a 0-28 to 3-16 win.

“When we got within a point we had changed the momentum (of the game), but fair play to Tipp, they came back and they are good champions. They got that bit of daylight there again,” Dónal Moloney told the assembled press corps on Saturday evening in Cork - Moloney guides the fortunes of the Clare team alongside Gerry O’Connor and coach Dónal Óg Cusack.

Moloney also revealed that although his side struggled to push on and win the game this Clare team were “not far away”.

“It is a source of frustration, but we have changed how we are playing. We are trying to attack more and create more. Some of that is coming right, but it is about getting the balance right. Unfortunately in the last two games we have not really got the balance right. But, we are not very far away either,” Dónal Moloney explained.

“The wides are regrets; we missed goal chances as well and probably made some mistakes at the back which, probably, handed them some points,” Moloney said when asked to reflect on the nineteen wides fired by his Clare team (Tipperary thirteen).

“There are a lot of the regrets, but, having said that, we have an awful lot to be positive about as well. We had some outstanding performances today.”

Clare scored three goals and created a hatful of goal-scoring chances, but Dónal Moloney refused to describe the Tipperary full-back line as a “weakness”.

“I would not consider any line on the Tipperary team as a weakness considering that they are the All-Ireland champions,” Dónal Moloney said.

As early as the ninth minute Clare had the ball in the Tipperary net, but Conor McGrath was penalised for an over-carry during the build-up to the Cratloe man’s strike. Indeed, Dónal Moloney described the decision to penalise the Clare corner-forward in that instance as “very harsh”.

“Yeah, look, it is a big game for (referee) Colm Lyons as well - we would not be complaining too much about it, but that was harsh; that was a very harsh free. There were loads of other incidences of over-carrying throughout the game and that was a very big call for him to make.”