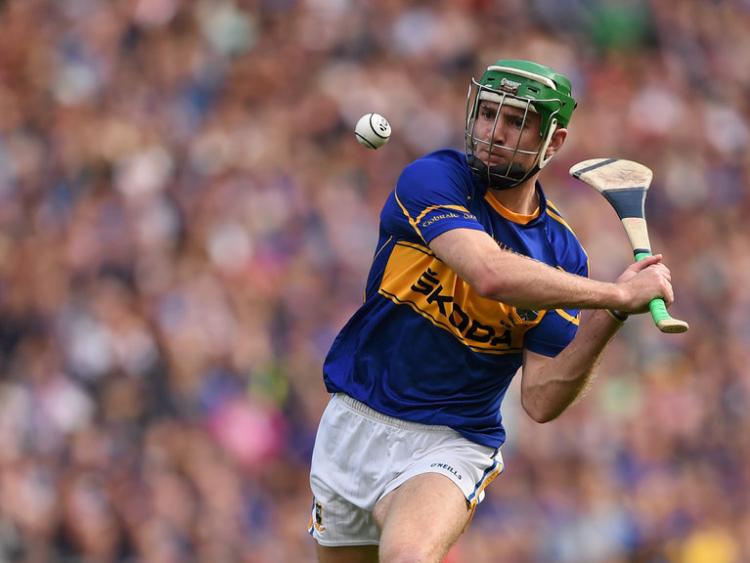 Noel McGrath made an exceptional contribution to the Tipperary effort on Saturday.

Tipperary's performance against Clare on Saturday was far from perfect, but none of the issues associated with the display could be put down to a poor attitude. Indeed, the statistics associated with the three-point win over the Banner suggest that the All-Ireland champions have turned a corner and are back in the hard-working groove - big time.

The Tipperary senior hurling team, as usual, are scoring for fun this season - against Dublin Michael Ryan’s men notched 6-26 (the county’s highest championship score in ninety-two years) before firing 0-28 against Clare to force their way into the semi-finals (0-28 to 3-16).

The deficiencies, however, associated with the performances of the team relate to the opposite end of the field - in the 2016 championship, for example, Tipperary shipped 19 points on average. In this year's league campaign that average jumped to over 21 points and to over 23 in the 2017 championship (when you remove Westmeath from the equation the Premier County have conceded 27.5 points on average this summer prior to the contest with Clare).

Typically, when a game of chess is reported by specialist media observers the analysis is not concentrated on the killer final move, but, instead, on the sequence which set the inevitable end game in motion. Similarly the most significant drama in hurling often occurs during the build up to scores - what unfolds in the middle third of the field is often much more interesting than the actual goals and points.

In the Allianz National Hurling League final against Galway and the Munster quarter-final against Cork Tipperary attempted to win those respective contests without doing the work necessary to lock down the middle third of the field in the first instance - Tipp attempted to win matches against significant opposition from a platform which was burning down around their ears.

Since Michael Ryan’s appointment as manager the Upperchurch-Drombane man has emphasized his intention to build a hard-working identity for the Tipperary senior hurling team. And, true to his word in 2016 the Tipp players established a significant reputation for themselves in that regard. However, there is no getting away from the fact that the work rate of the Tipperary team became a concern this season.

Irrespective of what anyone may argue about tactics or the significance of player talent the main thing is still the main thing - if your team does not set the terms and conditions of the game in a physical sense you are asking for trouble. And, this especially applies to forwards who determine the quality of ball that is permitted to enter your half of the field.

In 2016 the defining characteristic of the team was the forwards’ determination to contaminate the quality of possession that the opposition enjoyed. The ferocity of the Tipperary tackling, for example, in the 2016 All-Ireland final affected Kilkenny’s shots and their shot percentage success rate - Tipperary won the shot tally 33-17 and the shot percentage success rate 73% to 47%.

In the 2017 games against Galway and Cork Tipperary conceded 5-48 and although the finger was pointed at the full-back line the more significant problem could be located further out the field - the forwards were simply not working hard enough.

Against Cork in the provincial quarter-final Tipperary also lost the highly-significant work rate ratio 3.83 to 2.64.

Essentially, the work rate ratio measures how a given team has performed in terms of their determination to tackle the opposition - the work rate of a team can only be interpreted accurately once measured in proportion to the possession enjoyed by the opponent. As a rule of thumb if a team registers a work rate ratio of two or less (the lower the better) the team is doing very well i.e. the opposition enjoys two possessions of the ball on average before they get tackled, hooked, blocked or turned over.

So, against Cork Tipperary allowed their Rebel opponents almost four possessions of the ball on average before getting in a tackle while on Saturday last against Clare the Premier County’s work rate ratio improved to an encouraging 2.35.

In 2016 Tipperary’s work rate ratio was sensational. Indeed, Tipperary registered an extraordinary score of less than two against Kilkenny in the All-Ireland final. Therefore almost every time that a Kilkenny player had possession of the ball he was turned over, tackled, hooked or blocked. As you can imagine in that environment the opposition’s good decisions soon start to run out. 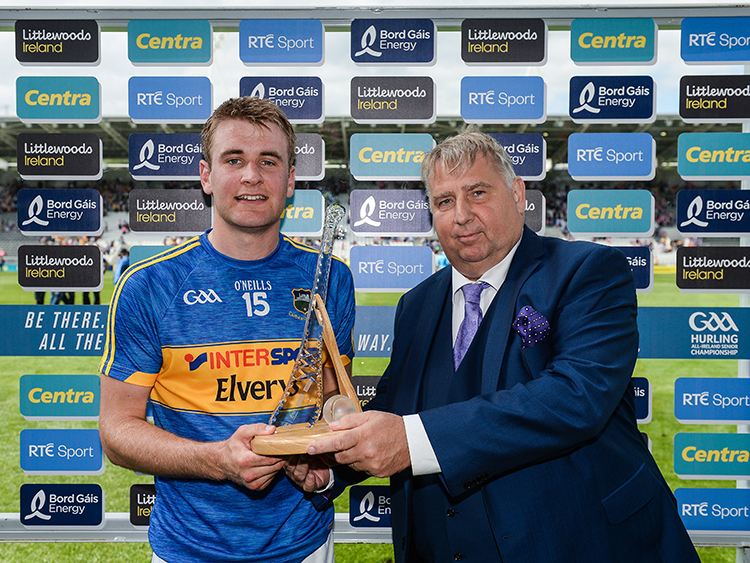 Tipperary’s work rate against Clare helped Michael Ryan’s side to build a platform from which to win the game. And, the work rate of the forwards made a huge contribution in this regard. In all Tipperary’s starting forwards got in forty tackles and won twelve turnovers in the process. Indeed, it was highly encouraging to see the inside line of John McGrath, Séamus Callanan and John O'Dwyer get in fifteen tackles (won three turnovers).

Patrick Maher exacted a significant influence at centre-forward registering 32 plays, getting on the ball 22 times, scoring 0-2 (plus one shot wide and one short), assisting with 0-3 and also set up another shot which was missed. The Lorrha man won two puck-outs and six turnovers. Although Maher was turned over five times in the tackle he was also Tipperary’s top tackler (registering ten).

There is a case, however, to retrospectively name Noel McGrath as the man of the match ahead of his brother - Noel’s contribution to this victory was extraordinary. Noel McGrath had 28 plays, was on the ball 19 times, scored 0-4 (100% shooting success rate), provided the assist for four points, set up two more shots at the Clare goal, won an opposition puck-out and completed 86% of his passing attempts. Noel also brought great energy to the defensive effort when winning two turnovers and getting in seven additional tackles (only out-worked by Patrick Maher).

On Saturday Tipperary won by three points scoring 0-23 from play while conceding 3-10 - Tipperary created 36 shots in all and although Clare managed 28 shots Tipperary restricted the quality of those opportunities through sheer work rate.

There has been much hand-wringing about Clare's 17 wides (from play), but the pressure exerted by the Tipperary team, especially by the forwards who worked back impressively, was a contributing factor. As a result Tipperary managed to record a 64% shot success rate while Clare converted just 36% of their shots. Against Cork, for instance, Tipperary’s collective determination to defend their goal was not as marked and the Rebels were allowed to convert 63% of their opportunities.

The issues associated with Tipperary’s performance on Saturday could not be laid at the door of poor attitude, but it must be noted that Clare were permitted to get nine shots (including rebounds) in on Tipperary goalkeeper Darragh Mooney's goal which is a distressingly high number.

Plenty of fingers have been pointed at the Tipperary full-back line this season and last weekend was no different, but the performance of Donagh Maher deserves to be celebrated - the Burgess man won his duel with the exceptional Conor McGrath. Donagh registered 21 plays, was on the ball 11 times, set up 0-1, managed a 91% passing success rate, won two turnovers, got in three tackles, a hook and two blocks (one of which to deny Clare a goal) not to mention registering a series of key interceptions.

Tipperary struggled on their own puck-outs losing that category 18-20 (47-53%) while doing marginally better on the Clare re-starts (winning 20 of Andrew Fahy’s puck-outs while the Banner won 19 - 51-49%). Puck-out success rates, however, do not always correlate with winning elite hurling matches - against Cork, for instance, Waterford won 74% of their re-starts (Cork 61%) and still lost.

Although Tipperary won the play count (301-288) Michael Ryan’s men, ironically enough, enjoyed significantly less possession than Clare (199-214 - 48-52%) and had a pass completion percentage of 77% while Clare managed a superior 79%.

Based on Galway's scintillating championship form and their sixteen-point win (3-21 to 0-14) over Tipperary in the Allianz National Hurling League final the Tribesmen, led by manager Micheál Donoghue (and conditioned by former Tipperary coach Lukasz Kirszenstein), will, rightfully, enter the forthcoming semi-final clash as favourites, but Tipperary must take confidence from their battling win over the Banner on Saturday. Indeed, Tipperary’s fierce tackle rate will give the Premier County a fighting chance against the Tribesmen.

Galway beat Dublin (2-28 to 1-17), Offaly (0-33 to 1-11) and Wexford (0-29 to 1-17) during their successful Leinster championship campaign. But it is Tipperary's recent performances against Galway which will trouble supporters of the blue and gold.

Tipperary lost the 2015 All-Ireland semi-final to the Tribesmen (3-16 to 0-26), but avenged that defeat in 2016 when seeing off Galway in the last four (2-19 to 2-18). The sides last encountered one another in the 2017 league final when Galway beat Tipperary by a resounding sixteen points.

A key facet worth noting from all three of those encounters is that Galway out-worked Tipperary in each game. Galway, of course, will also be nourished by the experience of last year’s All-Ireland semi-final which Micheál Donoghue has every reason to believe was his side’s for the taking. Indeed, only for an injury to Joe Canning, a timely Pádraic Maher hook, a moment of magic from John O’Dwyer and a key tactical switch (which saw John McGrath moved to full-forward) Tipperary could well have missed out on last September’s All-Ireland title. Tipperary's performance against Galway in the league final was also worse than poor, but the mood music around the squad appears to be much healthier now.

Following the win over Clare manager Michael Ryan described the win as “anything bar comfortable”, but the Upperchurch-Drombane man also revealed how proud he was of his players.

“We are arriving at the right tempo for the All-Ireland series,” Michael Ryan said.

Clare asked Tipperary a set of significant questions, but Michael Ryan's men answered them in real style - in the first half Tipp shipped two distressing three-pointers, but recovered to lead by five at the break. Tipperary then led by seven in the 55th minute (0-23 to 2-10) and although Clare hit six points without reply to close the gap to one with time fast running out Tipperary responded to the challenge once more to seal the win.

And, in the aftermath of the contest the players made some encouraging noises - John McGrath, for instance, said that Tipperary were not prepared “to lie down”.

“We have taken a lot of blows this year already and we were not going to take another one,” John McGrath told RTÉ’s Darragh Maloney.

Saturday’s performance was not perfect, but none of the issues associated with the display could be put down to a poor attitude. Indeed, a massive attitude adjustment appears to have taken place among the Tipperary players and if those same players can bring a similar level of intensity to the contest with Galway then Michael Ryan’s men have a real chance of causing an upset.