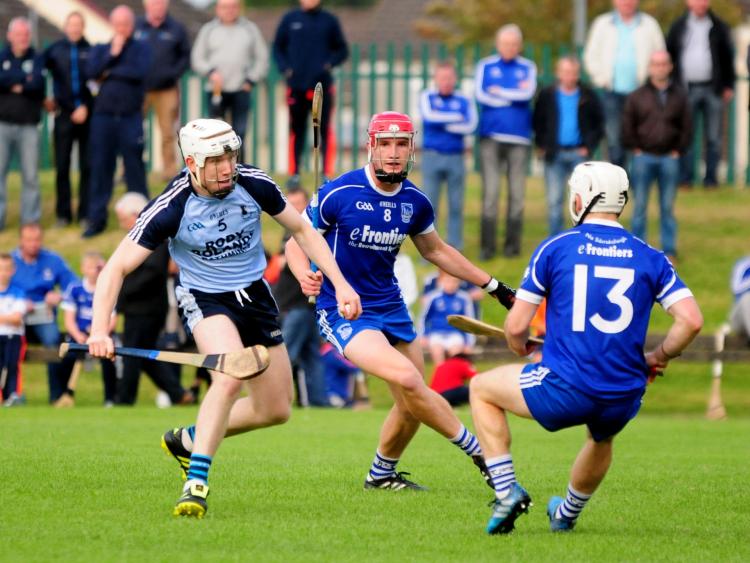 Thurles Sarsfields streaked to a double-score victory over Nenagh Éire Óg on Saturday.

The group phase of the Tipperary Water County Senior Hurling Championship was settled following a hectic weekend of club action with Clonoulty-Rossmore, Loughmore-Castleiney, Thurles Sarsfields and Éire Óg Annacarty sealing their places in the quarter-finals.

This season there were four groups in Roinn I of the county senior hurling championship - the group winners progress to the quarter-finals while each group runner-up may be required to battle it out with a divisional champion in the preliminary quarter-finals for a chance to compete in the last eight.

Clonoulty-Rossmore, Loughmore-Castleiney, Thurles Sarsfields and Éire Óg Annacarty topped their respective Roinn I groups. Drom & Inch, Borris-Ileigh, Kilruane MacDonagh’s and Mullinahone finished second and duly booked their place in the knock-out stage of the competition - each of those sides may yet have to play a divisional champion in order to progress to the last eight.

Portroe, Upperchurch-Drombane, Nenagh Éire Óg and Killenaule finished third in their respective groups while Ballina, Kiladangan, Carrick Swans and Burgess finished fourth. The fourth-placed teams in each group play-off in two games with the individual game losers are demoted to Roinn II for 2018.

ROINN ONE GROUP ONE

On Saturday in Dolla Portroe earned themselves a vital draw with Clonoulty-Rossmore (1-19 to 0-22) and duly finished third in the group on two points. Clonoulty-Rossmore won the group outright on five points while Drom & Inch sealed their place in the knock-out phase of the competition thanks to a 3-20 to 2-16 victory over Ballina at MacDonagh Park, Cloughjordan. Ballina must now brace themselves for a relegation play-off.

On Saturday evening Thurles Sarsfields helped themselves to a double-score victory over Nenagh Éire Óg at Templemore (4-20 to 2-10). Meanwhile on Sunday in Boherlahan the Kilruane MacDonagh’s cruised to a ten-point win over Carrick Swan (3-21 to 1-17). Thurles Sarsfields, the defending champions, won the group while Kilruane were second. Nenagh Éire Óg were third and Carrick Swan now face into a play-off to see which two sides drop to Roinn II for 2018.

In Monroe on Saturday Mullinahone turned the tables in spectacular fashion on Killenaule when winning 2-17 to 1-13. Prior to this weekend Killenaule topped group four on four points, but Mullinahone’s seven-point victory propelled Paul Curran’s men back into contention. Éire Óg Annacarty got the better of Burgess (2-20 to 1-17) meaning that Killenaule (-1), Mullinahone (+2) and Annacarty (+9) all completed the group phase of the competition on four points - Mullinahone and Éire Óg progress to the knock-out phase of the competition on scoring difference and Killenaule finished third while Burgess were fourth on zero points.

The group stage of the Séamus Ó Riain Cup (Roinn II of the county senior hurling championship) came to a conclusion on Sunday. And, there is a significant change to the format of Roinn II this season. The four group winners and runners-up progress to the quarter-finals of the Séamus Ó Riain Cup. The winner of that round of games qualifies for the semi-finals of the cup while both finalists are promoted to Roinn I for 2018.

Following the third round of the county senior hurling championship the following teams have qualified for the quarter-finals of the Séamus Ó Riain Cup: Toomevara, Roscrea, Templederry Kenyons, Silvermines, JK Bracken’s, Clonakenny, Holycross-Ballycahill and Lorrha-Dorrha.

On Sunday at MacDonagh Park, Nenagh Toomevara beat Newport by fourteen points (2-20 to 0-12) to win group one while Roscrea beat Ballingarry 3-25 to 2-11 at The Ragg to claim second place and book their place in the knock-out stage of the competition. Newport finished third in the group while Ballingarry were fourth and now face into the relegation play-offs.

JK Bracken's won group three on scoring difference while Clonakenny came second and Borrisokane finished third. JK Bracken’s and Clonakenny drew in their respective contest while JK Bracken’s beat Borrisokane. Then on Sunday evening Clonakenny saw off the challenge of Borrisokane in Roscrea by two points (1-19 to 2-14). Borrisokane duly finished bottom of the three-team group and now face the relegation play-offs.

Prior to the weekend Holycross-Ballycahill had already won this three-team group with successive wins over Knockavilla Kickhams and Lorrha-Dorrha. On Sunday at MacDonagh Park, Nenagh Lorrha-Dorrha beat Knockavilla 3-20 to 2-20 in a high-scoring affair. The result means that Lorrha go through to the quarter-finals alongside Holycross while the Kickhams face into the relegation play-offs.

On Saturday in group two Moneygall beat Roscrea 1-23 to 0-16 at MacDonagh Park, Cloughjordan. This is a three-team group and although Moneygall and Drom & Inch drew in a previous round Moneygall’s ten-point win over Roscrea was not nearly enough to earn them top spot in the group - Moneygall (+10), Drom & Inch (+18). Roscrea finished third on zero points.

In group five on Friday Kiladangan beat Lattin-Cullen Gaels 2-16 to 0-16 in Newport while Arravale Rovers enjoyed a thirteen-point victory over Cappawhite in Annacarty (3-15 to 0-11). Despite Rovers’ impressive victory Cappawhite progressed as group winners on four points - Kiladangan were second on four points losing out to Cappawhite on the head-to-head record. Arravale Rovers finished third in the group while Lattin-Cullen Gaels were fourth.

On Saturday in group six (another three-team group) Moyle Rovers beat Galtee Rovers 2-13 to 0-12 at Cashel, but Kilsheelan-Kilcash already had this group sewn up thanks to their one hundred per cent record.