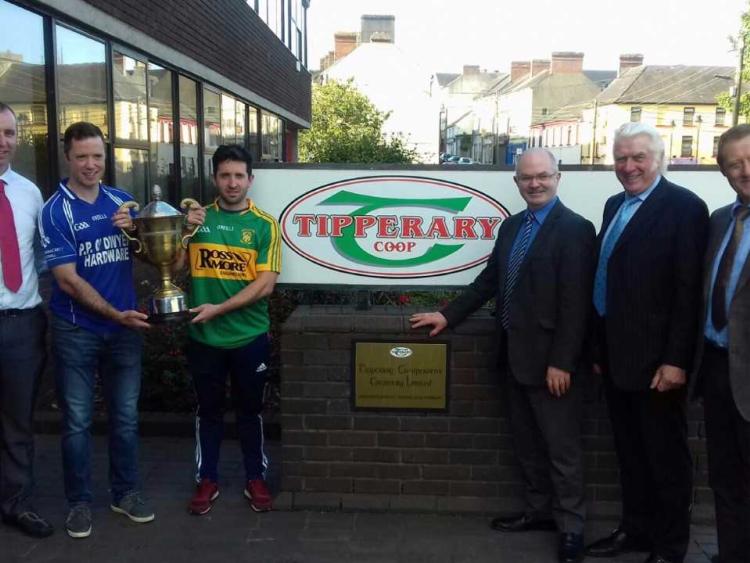 It will be just the sixth meeting of the sides in the final (Clonoulty did beat a Donohill-Cappa combination in the 1932 and 33 deciders). The record is standing at three to two in Clonoulty-Rossmore’s favour.

Éire Óg will be playing in their 25th final and their fifth in the last six years as they look to regain
the O’Dwyer Cup they held for three years in succession from 2013 to 2015. They will be looking for title number 12 in their own right while they have also two titles joined with Golden-Kilfeacle (2004) and Cappawhite (1961).

Clonoulty-Rossmore will be playing in their 32nd final and looking for title number 18 as they
look to retain the O’Dwyer Cup.

For Clonoulty-Rossmore they will look to go joint top of the roll of honour for the first time
since 1939 when Cashel King Cormacs joined them on four titles. Twelve months later
Clonoulty had the chance to return to the top of the roll but Cashel King Cormacs prevailed
5-1 to 3-3. Incidentally it was the first time the O’Dwyer Cup was presented after the cup
was given to the board by Fr Meagher to perpetuate the memory of Willie O’Dwyer the first
Chairman of the board.

Standing in their way is an Éire Óg Annacarty-Donohill team who will surely enter the final as
favourites for the first time against Clonoulty-Rossmore.

Éire Óg lost their opening three finals in 2008, 2010 and 2012 to their rivals on Sunday and in 2013 with Clonoulty-Rossmore going for their seventh title in-a-row it was a case of by how much. But every dog has its day and credit to this Éire Óg side as they over turned proceedings in 2013. Yet they were perceived underdogs again twelve months later but in the rain they grounded out another victory. Twelve months later their ambition was met again when they retained the O’Dwyer Cup for a third year in-a-row.

Éire Óg looked a tired team twelve months ago when Clonoulty-Rossmore ended their reign
as champions, but 2017 has seen a new freshness about the team. Their wins over Mullinahone and Burgess with a defeat to Killenaule in the middle have seen them finish top of their group in the county championship. Éire Óg have gone into the West championship knowing that regardless of the outcome they have already secured a quarter final spot in this year’s county championship. That said they have gone into the West championship a determined team.

Once they settled to their task in round one of the West they always seemed to have enough against Clonoulty-Rossmore despite a late John O’Neill goal cutting the gap to three points. That game was Clonoulty-Rossmore’s first defeat in championship hurling in 2017.

Éire Óg were slow to get going against Knockavilla-Donaskeigh Kickhams although credit has
to be given to the latter at how they went about the first half leading by eight at the break.

That said Éire Óg’s second half performance may be the performance that ultimately leads to them regaining the O’Dwyer Cup. They outscored Kickhams 1-17 to 1-4 in what was a powerful second half.

Clonoulty-Rossmore found their rhythm against neighbours Knockavilla-Donaskeigh Kickhams eventually seeing off the dogged challenge of their neighbours scoring 3-21 in the process.

Clonoulty-Rossmore had gone into the West championship unbeaten with an opening round win over Ballina, while their second half performance over Drom &Inch certainly got the attention of people. They went into their last game having already secured their quarter-final spot and finished the group stages with a draw against Portroe.

The spine of Clonoulty-Rossmore’s defence is very strong with John Devane and John
O’Keeffe marshalling these positions. They certainly will have their hands full with Kevin Fox
and Donal O’Dwyer. Fox will bring a physical presence to the centre-forward position as well
as being able to chip in with a few points. Seanie Ryan will add pace to the Éire Óg attack
and is able to point from play and place balls. Jimmy Ryan Con will likely pick him up. The
addition of Brian Fox to the Éire Óg attack has given them further options and Fox has added
points in both games. He also has the ability to come out the field as he did against Kickhams when needed to change things around. Joey O’Keeffe is an experienced defender and his credentials will be tested. Whether he leaves Brian Fox roam out the field or follows him will be interesting. Ronan O’Brien will certainly require watching and will alternate between wing and corner forward but his ability to score goals may prove crucial. He has hit in the onion sack in both West games so far. Paul Downey will be positioned in wing forward and he has added 0-4 in their last two games and he also brings stability to the line. Paudie White and Liam Devane will have to be on guard here and cut the amount of possession they are able to get.

Midfield will be a crucial battle and Éire Óg will certainly look to Conor O’Brien who will be partnered with Patrick Aherne. O’Brien’s leadership and determination in their two games so far has been huge. He can point from long distance from both play and frees while he will also provide the link to setting up the Éire Óg forwards. Sean O’Connor chipped in three points for Clonoulty-Rossmore the last day here and will possibly be partnered by Ronan Heffernan.

Clonoulty-Rossmore’s half-forward line never really got into gear the last day out against Éire Óg. The loss of Timmy Hammersley cannot be understated. Sean Maher is a big man and may go centre-forward on Paudie O’Dwyer who will certainly give nothing away too easily. Stephen O’Dwyer and Tom Fox will make up the remainder of the Éire Óg half back line. Clonoulty-Rossmore certainly need ball winners here. Dillon Quirke will likely go wing forward.

The addition of John O’Neill to the full-forward line has certainly helped them and though he
was well held against Éire Óg he did mange 1-13 against Kickhams. He has the ability to score from play and place balls and certainly has an eye for goal. Diarmuid Ryan will possibly be given a man marking job here. Tom Butler will either go full forward or start in the half forward line but chips in with a few points and has plenty of experience. Eoin Bradshaw will man the number three shirt with Dan Hogan in the other corner. Fiachra O’Keeffe will likely go into the corner while Ciaran Quirke may go full-forward.

Declan O’Dwyer will wear the number one jersey for Clonoulty-Rossmore and will provide steadiness and leadership from his vast experience. Darragh Mooney has made the Éire Óg
number jersey his own and has proven his ability here.

Both teams will have their reasons to want to win with neither side wanting to relinquish their grip on the O’Dwyer Cup. Éire Óg will want to prove they haven’t gone away and that last year was just a blip while Clonoulty-Rossmore will aim to get back on top of the ladder in the West again.