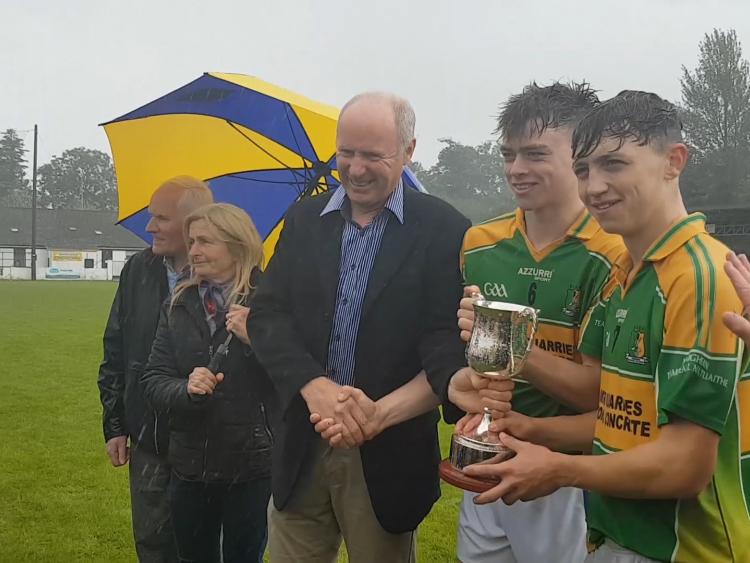 Moyne Templetuohy-Thurles Gaels recovered a six-point deficit at Templemore on Saturday afternoon to beat a hard-working Drom & Inch side by seven in the final of the Thurles Credit Union Mid Tipperary Minor B Hurling Championship.

Gearóid O’Connor was named as the man of the match for his eye-catching display at centre-forward, but centre-back Conor Bowe also played a key role in this victory for the combination side who trailed 0-2 to 0-8 after twenty minutes. Moyne Templetuohy-Thurles Gaels, however, won the remainder of this contest 2-14 to 0-7 with Michael Mulcaire and Dean Lawlor accounting for the goals.

Playing with the wind in the opening half Drom & Inch raced into a six-point lead. Gearóid O’Connor scored two points (one free) for Moyne Templetuohy-Thurles Gaels, but efforts from Aidan O’Meara (three, two frees), Lorcan Campion, Michael Clohessy, Ben Stapleton and two excellent left-handed strikes from Paul Bergin helped Drom & Inch toward a 0-8 to 0-2 advantage by the 20th minute. Drom had enjoyed a 100% return from their shots on goal while Moyne Templetuohy-Thurles Gaels had already fired seven wides into the breeze.

Two Gearóid O’Connor placed balls and a Michael Mulcaire point from play ensured that Moyne Templetuohy-Thurles Gaels trailed by just three at the break (0-5 to 0-8) - a manageable deficit considering the prevailing weather conditions.

Within five minutes of the re-start Moyne Templetuohy-Thurles Gaels were level - Conor Bowe cracked over a superb score off his left to set his side on the way before Gearóid O’Connor converted two frees. Then, in the 36th minute, Michael Mulcaire cracked home a key goal (1-8 to 0-8).

Drom & Inch responded with three Aidan O’Meara frees to tie the game by the 46th minute while Moyne Templetuohy-Thurles Gaels had Ciarán Lloyd to thank for making two critical interventions in the 41st and 43rd minutes - the wing-back hooked Paudie Kinane and then blocked Ben Stapleton to deny Drom clear goal-scoring opportunities.

Aidan O’Meara responded with a free for Drom, but three more Gearóid O’Connor strikes left nine in it and although Drom fought to the bitter end Moyne Templetuohy-Thurles Gaels were crowned worthy champions in the driving rain.