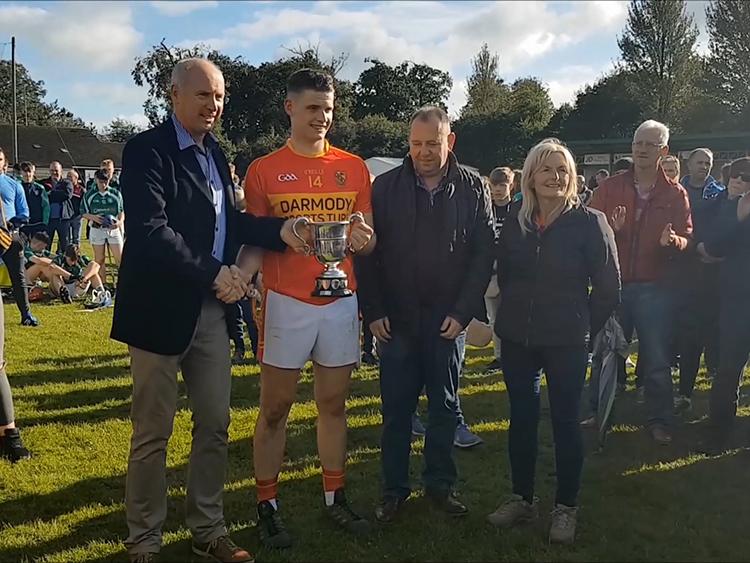 Zach Jackson was shown a second yellow card in the 17th minute, but thanks to the superb efforts of Rory Darmody, Darren Flood, Jack Fallon and, of course, team captain Anthony McKelvey Moycarkey-Borris managed to force extra-time and then, once returned to the full compliment, surged toward a famous win. Meanwhile Darragh Woods, who fired twenty-one points in all, must be wondering how he ended up on the losing side.

Moycarkey-Borris led by five (1-6 to 0-4) when Jackson, his side’s influential centre-back, was dismissed. Moycarkey-Borris still led by five at the break (1-10 to 0-8) and surged seven clear thanks to a Jack Fallon goal, but a resolute Holycross-Ballycahill reeled their opponents in before Mikey Nally scrambled home a goal in the 61st minute to present his side with a precious lead. There was still time, however, for Moycarkey-Borris substitute Diarmuid Maher to flash over an equaliser in the 63rd minute (2-16 to 1-19) - in extra-time Moycarkey-Borris proved the more accomplished outfit when dominating proceedings.

Moycarkey-Borris took off like a rocket and hit 1-4 without reply inside the opening nine minutes. Anthony McKelvey landed three points before a McKelvey free dropped short in the ninth minute, the delivery was spilled by the misfortunate ‘keeper Cormac O’Connor and there was Mark Heffernan to take full advantage.

Holycross-Ballycahill got off the mark thanks to two Darragh Woods frees, but Moycarkey-Borris responded in kind. Two more Woods placed balls reduced the deficit face by Holycross-Ballycahill to five before an ambitious Woods effort from a 21-yard free was saved. In the aftermath of that free Zack Jackson tangled with Eoin Morris and was subsequently shown a second yellow card.

Cormac O’Connor saved an Anthony McKelvey rasper in the 22nd minute before two more placed balls from the towering full-forward forced Moycarkey-Borris six clear (1-8 to 0-5). Darragh Woods notched his side’s first score from play in the 24th minute. Holycross-Ballycahill enjoyed a slight sniff of goal in the 31st, but ‘keeper Rhys Shelly saved smartly from Mikey Nally. Moycarkey-Borris led 1-10 to 0-8 at the break.

A lack of concentration cost Holycross-Ballycahill dearly in the 33rd minute - Anthony McKelvey, who was now performing a vital ball-winning role for his side at right wing-forward, took a quick free to the unmarked Jack Fallon and the midfielder fired his side into a 2-10 to 0-9 lead.

In the 34th minute Darragh Woods steered over a sideline ball, but the sides then proceeded to trade points and entering the final quarter a composed Moycarkey-Borris side led 2-13 to 0-12. It is worth noting that in the 43rd minute a blistering 21-yard free from the stick of Darragh Woods was saved by Moycarkey-Borris team captain Anthony McKelvey.

Holycross-Ballycahill, however, made a determined stand between the 45th and 52nd minutes when five successive points cut the deficit to two points - Éanna Ryan, Darragh Woods (two frees), Jimmy Ryan and Bryan O’Mara accounted for these rousing scores (2-13 to 0-17).

Moycarkey-Borris steadied themselves with two points, one a cracker from Darren Flood, but efforts from Mikey Nally and Darragh Woods (free) left just the two in it entering injury time before Nally scrambled home a goal which presented Holycross-Ballycahill with a late lead. There was still time, however, for Diarmuid Maher to land an equaliser.

Darragh Woods notched four frees during the opening half of extra-time for Holycross-Ballycahill, but Moycarkey-Borris responded with five of their own to lead 2-21 to 1-23 at the break - Anthony McKelvey helped himself to three points while John Kirwan added two more. Another Kirwan point added to the Moycarkey-Borris tally immediately after the interval before an Anthony McKelvey free left three in it. Two more Darragh Woods frees reeled Moycarkey-Borris in a little, but it was instructive to note that Holycross-Ballycahill failed to score from play in extra-time.