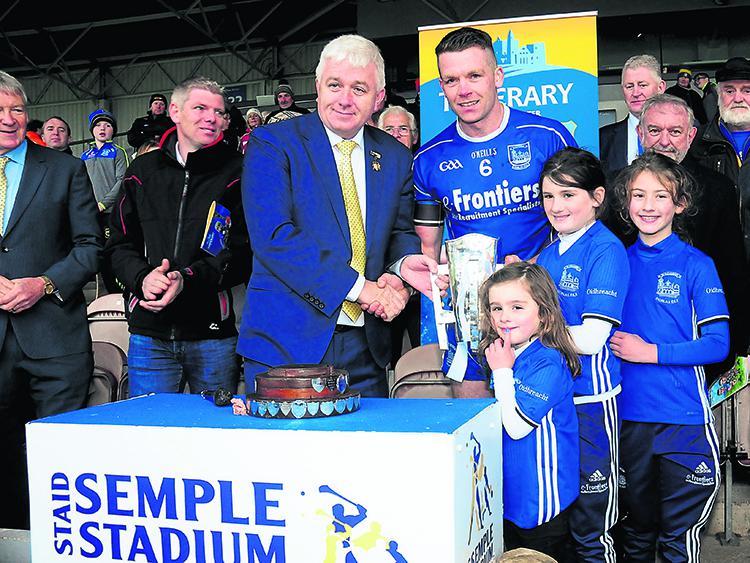 The delegates to and the executive officers of the Tipperary County Board are concerned about the likely impact the proposed revamp of the All-Ireland senior hurling championship could have on club fixtures in the Premier County - an Árd Chomhairle motion proposes to run the Munster championship on a round robin basis; a structure which would reduce the number of Sundays available to play club games drastically.

On Saturday, September 30th at Croke Park the Gaelic Athletic Association will convene a special congress to discuss and then vote on a number of motions pertaining to the structure of the All-Ireland hurling championship(s).

Those motions were discussed at the September meeting of the Tipperary County Board on Tuesday, September 26th in the Sarsfields Centre, Thurles.

And, it was clear at the meeting that both the County Board executive and the delegates to the County Board were concerned about the potential consequences that a revamped All-Ireland senior hurling championship could have on the club scene in Tipperary.

The principal Árd Chomhairle motion proposes to re-structure the All-Ireland senior hurling championship drastically - the motion proposes to reduce the competition to ten teams and play the five-team Munster and Leinster championships on a round-robin basis with the top two teams in each provincial group facing off in their respective provincial final while the third placed teams advance to the All-Ireland quarter-finals.

In response to the Árd Chomhairle motion Cork, Dublin and Tipperary have proposed competing motions which are on Saturday’s agenda.

The Tipperary motion, however, proposes the introduction of a knock-out/loser’s group format for the respective provincial championships. And, if the Tipperary motion is defeated the Premier County delegates to Saturday’s special congress will support the retention of the current hurling championship format.

At Tuesday night’s meeting of the Tipperary County Board there was no support from the executive committee or from the club delegates for the Árd Chomhairle motion to introduce a round robin format to the provincial championships.

County Board secretary Tim Floyd, for example, explained to delegates that the executive committee proposed a motion with regard to the re-structuring of the All-Ireland senior hurling championship since they were concerned about the impact that the Árd Chomhairle motion could have on club fixtures.

County Board chairman Michael Bourke then explained the likely consequences if the Munster championship was run on a round robin basis.

“There will be no time until the end of August to play club games - it is as simple as that,” County Board chairman Michael Bourke explained.

“The Croke Park motion does not allow for club activity,” Mr Bourke added.

Speaking passionately from the floor Arravale Rovers club delegate Gerry Ring simply asked “where do we get the Sundays to play our club games?”

“Our games are suffering and people are walking away from our games,” Gerry Ring insisted.

“Are the tidy towns (committees) to be the new community organisations in Ireland? Are we gone,” the Arravale Rovers delegate asked.

North Tipperary Board chairman Dan Kennedy (Roscrea) suggested that, inevitably, “county players and club players are going to have to become separate entities”.

The Kilkenny County Board have declare their preference to postpone the congress - Kilkenny want to wait a year before making any decision in terms of re-structuring the provincial and All-Ireland championships. And, County Board vice-chairman John Devane proposed a similar course of action on Tuesday evening.

“I am totally unhappy with it,” John Devane revealed before arguing that the GAA “are rushing into this”. The Boherlahan-Dualla man also suggested that the special congress should be postponed.

Borris-Ileigh delegate Gerry Treacy agreed and suggested that a postponement would give all parties concerned the “opportunity to sit down and have a proper discussion about it”.

Nicholas Moroney (St Patrick’s) spoke out in favour of retaining the status quo, but Mr Moroney also argued that “we have tighten it up” in terms of scheduling.

On Sunday, September 24th the Tipperary County Board hosted a press event to promote the forthcoming senior club hurling championship final between Thurles Sarsfields and Borris-Ileigh. And, the opinion of the Thurles Sarsfields captain Pádraic Maher on the entire issue was revealing. Indeed, Pádraic Maher argued that the scheduling of the games and not the format was the issue with regard to structure of the inter-county hurling championship.

“I know myself that I love playing in the Munster championship. The players just get on with what we are dealt, but I think the Munster championship is great. There are pros and cons to it (the proposed round-robin provincial championships). I would be a bit more (of a) traditionalist. Look, if they come up with a system fair play, but, I suppose, all we want to do is play games. Even in the National League, you are playing quality games week-in, week-out and they are very enjoyable. I don't know what is going to happen, but if we stick to the Munster championship I would be happy enough with that - if you could shorten up the gap between a Munster final and an All-Ireland semi-final that’s the issue,” Pádraic Maher explained.