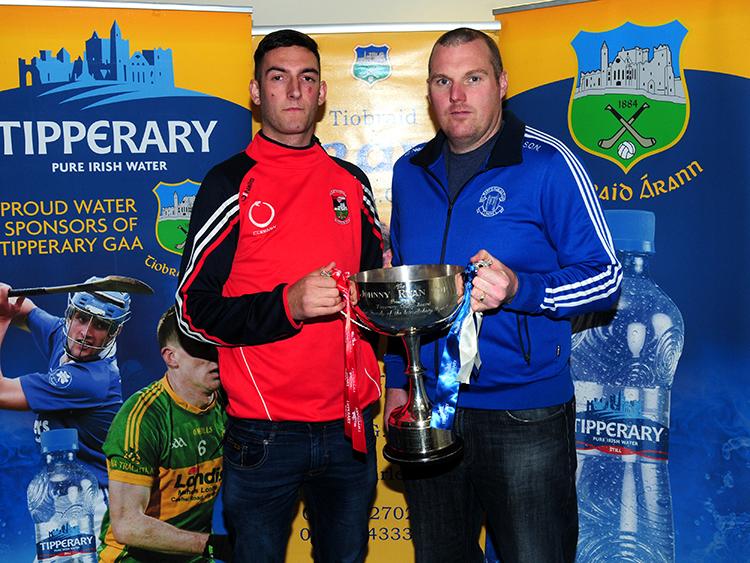 The final of the Tipperary Water County Intermediate Hurling Championship presents us with an intriguing prospect on Saturday, October 7th in Golden (throw-in 4pm) - in the red corner we find a Gortnahoe-Glengoole and in the blue corner St Mary’s Clonmel.

The respective club stories could not be more different - beset by emigration Gortnahoe-Glengoole are clinging on as hardy and prickly as a desert cactus in Mid Tipperary while St Mary’s Clonmel represent a potential sleeping giant in the South of the county.

Both clubs, however, do have something in common - on Saturday, October 7th the respective intermediate finalists are presented with an opportunity battle their way into the senior grade. Indeed, there is simply no getting away from the fact that Saturday’s final will be an emotionally-charged and potentially myth-making game for both sides.

"Everybody who is involved in the sport wants to be involved on county final day. When you start training in January and February in the muck and s***e everything is geared towards later on in the year. Nobody wants to be involved in that, but that is necessary to get us to where we are. And, now we are here and when you get that opportunity you have got to take that opportunity. But we do realise that we have a hell of a battle on our hands," St Mary’s manager Michael Ryan explained.

St Mary’s Clonmel are coming like a train. The club collected county minor A hurling titles in 2015 and 2016 and also won the 2016 South under-21A title for the first time in twenty-eight years - St Mary’s are closing in on a tipping point and they know it. Indeed, the next logical step is to earn promotion to senior and drive the project forward from there.

"It would be massive for us to get up senior,” St Mary’s club chairman Kevin Leahy explained.

It is as clear as a poke in the eye that St Mary’s Clonmel represent a sleeping giant on the Tipperary club scene - according to the 2017 census, for example, Clonmel’s population of 17,140 comes close to topping that of Nenagh and Thurles combined.

For some time St Mary’s Clonmel could have been accused of accepting their spot on the club hurling ladder a little too gladly. St Mary’s did not think big, but now, under men like club chairman Kevin Leahy, the Clonmel outfit dare to dream.

Gortnahoe-Glengoole, of course, are nourished by dreams of their own. Gortnahoe won the county intermediate title once before (1988) and suffered defeats in the decider most recently in 2010 and 2011 - in 2010 the Mid Tipperary club lost out to Borrisokane when Philip Austin scored a spectacular goal while a year later against Aherlow Gortnahoe were in control before a Steve Chapman strike wrestled the initiative and the final out of their hands. And, worse was to follow - a wave of player emigrations committed Gortnahoe to a re-building project whether the club liked it or not. To their credit Gortnahoe-Glengoole came out fighting, but they needed a little encouragement and found it in 2016 when the club’s under-21 hurlers roared to a county title.

“Eight of those guys, more or less, are starting on the intermediate team now. We have an average age of about twenty-three (in the team). All of those younger guys have won right up through the underage grades - they have all come through together and that was a big boost to us. The minors did well as well last year so there has been a bit of talent there. It is kind of new batch there now that will, hopefully, stay together for a good few years,” William Coleman added. 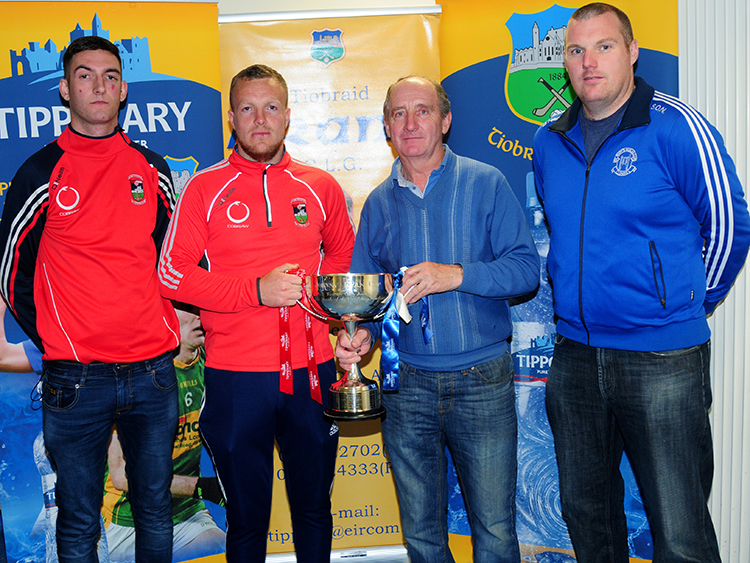 St Mary’s lost to Moyne-Templetuohy before beating Boherlahan-Dualla in the group stage of the county championship. In the South St Mary’s accounted for Kilsheelan-Kilcash with twenty-one points to spare before handling Carrick Davins to the tune of twelve points in their divisional final. In the county preliminary quarter-finals Moyle Rovers were seen off (4-13 to 0-9) before Clonmel beat Kilsheelan-Kilcash once more in the last eight. Then, in the semi-finals, St Mary’s avenged a single-point defeat to Moyne when seeing off the Mid Tipperary men 1-20 to 0-14. This performance was especially impressive and one which warmed the heart of manager Michael Ryan.

"We did play very well and we played some good hurling. A lot of it has to do with the attitude of the players and the mind-set that you have. Our lads went into the game in a good frame of mind and they used the ball well. They deserved the victory, but we earned it - it was a good test," the former Waterford manager explained.

And, the relief associated with winning the county semi-final against Moyne Templetuohy struck a chord with St Mary’s Clonmel player Gearóid Buckley.

"We feel like we have been knocking on the door for the last few years, definitely. I have been around for the last eight years and I have played in only two county semis. I always felt that we were good enough to get there, but we just could not take that final step. Thankfully we got over the line (against Moyne-Templetuohy)," Gearóid Buckley said.

The story of Gortnahoe-Glengoole’s season is just as fascinating.

In the group stage of the county championship Gortnahoe lost to Thurles Sarsfields, Ballinahinch and Golden-Kilfeacle. That series of results meant that Gortnahoe faced potential relegation to the junior grade. The Mid Tipperary men, however, re-grouped and surged toward the divisional final with victories over Drom & Inch and Boherlahan-Dualla. Next up came a final contest against Thurles Sarsfields - the Blues had accounted for Gortnahoe in the county championship with fifteen points to spare (1-9 to 1-24), but the Glengoole lads turned that result on its head in the Mid final when prevailing 1-16 to 1-10.

A re-match with Drom & Inch ensued in the county preliminary quarter-finals before Gortnahoe saw off a very good Ballinahinch team in the quarter-finals. Then, in the last four, the Mid champions took care of Cappawhite (2-17 to 0-16).

The victory over Thurles Sarsfields in the Mid final was the key result for Gortnahoe-Glengoole - that win got the season back on track.

"It's super any day that you beat them. They had beaten us, I think, just three or four weeks before that by about fifteen points so to come back and turn that over on the big day was super for us. We had not beaten them in a Mid final for eight or nine years so to get that silverware was just brilliant for us," Gortnahoe-Glengoole captain Kevin Slattery told the Tipperary Star.

Since both finalists started the season so slowly and are now coming on so strong the pattern begs the question: did Gortnahoe-Glengoole and St Mary’s Clonmel deliberately structure their season this way?

"We felt last year that we were too fit too early in the year. This year we put a greater emphasis on being fresh and we took a good few Sundays off,” St Mary’s manager Michael Ryan explained.

“The plan was to be here at this stage. Sometimes that doesn't work out, but it has worked so far for us. I suppose that when results go your way everything you did looks right. The same thing next year might not work. We did go that way about it, but, I suppose, we did have some fair battles along the way as well."

Gortnahoe-Glengoole appointed Hugh Coghlan (junior - Moyne Templetuohy) as coach to their intermediate team alongside selectors Jim Rafter and Paul Barnaville. And, club secretary William Coleman admitted that the trajectory of their season was not a deliberate ploy.

"Not really. We got drawn in a tough group in the county (championship). We had hoped to get over Golden in the first game because Golden were, maybe, seen as one of the weaker teams in the group. We were hoping to get over that in the first round, but we didn't,” Willian Coleman explained.

“We were fighting a losing battle after that against Ballinahinch and Sars. So, when those results went against us it helped to re-focus us and get us to look at the Mid championship solely. The focus then was that it was knock-out hurling from there on in," William Coleman added.

Gortnahoe-Glengoole will enter the county intermediate hurling championship final on Saturday as distinct underdogs. Indeed, it is obvious that club secretary William Coleman admires the body of work that St Mary’s Clonmel have done in recent years.

"They are coming for the last number of years with the two minor As and at under-21 they have been strong. They have had lots of lads involved in county panels and they, obviously, have a high profile manager involved there as well. They seem to be making progress and strides for the last number of years," William Coleman said as he considered facing into the county final as an underdog.

"It will probably suit us to be honest - the only time that we have been favourites this year was against Drom and we completely fell over the line. I think it suits the lads better to be going in under the radar," the Gortnahoe-Glengoole club secretary added.

PATHS TO THE INTERMEDIATE FINAL