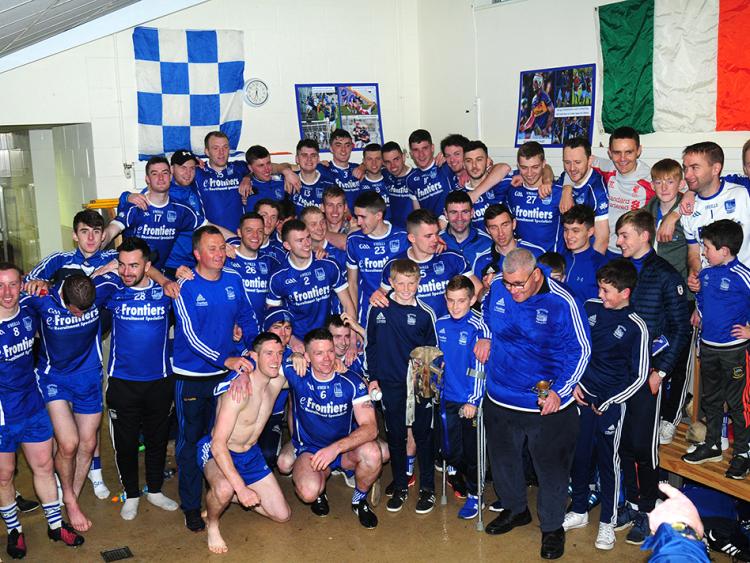 Thurles Sarsfields romped to a 36th county title and fourth successive Dan Breen Cup in another hectic weekend on the Tipperary club scene - on Sunday at Semple Stadium the Blues saw off the challenge of Borris-Ileigh (1-24 to 0-11).

There was just four points between the sides at the break (0-11 to 0-7), but Sarsfields out-classed their opponents in the second half before recording a sixteen-point win - a goal from Conor Stakelum in 45th minute settled the issue.

Please keep an eye on the sports section of our website for reports and reaction to Sunday’s county senior hurling final.

Sunday’s Séamus Ó Riain Cup final between Toomevara and Roscrea at Semple Stadium, Thurles ended in a draw (1-12 to 1-12) - although we were treated to a dramatic and reasonably entertaining finish to this contest the game lacked quality and both sides will probably look forward to another opportunity to show what they can do on the county final stage.

Toomevara set the pace for long stages. Although the Greyhounds fielded without John O’Brien, Benny Dunne and Joey McLoughney Toome were six clear by half time (1-7 to 0-4) after a low key opening period despite losing both Mark McCarthy and Paul Ryan to injury.

Roscrea’s use of the ball was poor and with full-back Andrew Ryan doing a superb man-marking job on Sam Conlon Ger Fitzpatrick’s men struggled to make any real impression on this contest. Indeed, Toomevara maintained their six-point advantage (1-12 to 0-9) until deep inside the last ten minutes when goalkeeper Daryl Ryan buried a penalty following a foul on Davin Flynn - inspired by that strike in the 53rd minute and by the re-location of Sam Conlon to half-forward Roscrea concluded the game with a flurry of points from Davin Flynn, Sam Conlon and Conor Sheedy to force a replay.

On Saturday St Mary’s Clonmel beat Gortnahoe-Glengoole 2-19 to 0-11 in the final of the Tipperary Water County Intermediate Hurling Championship. And, there was the real sense of an awakening in Golden. St Mary’s have long represented a sleeping giant on the club hurling scene in the South of the county, but St Mary’s have been coming like a train and this emphatic win franks their progress. Indeed, the Clonmel club collected back-to-back county minor A hurling titles in 2015-2016 and also won the 2016 South under-21A title for the first time in twenty-eight years. St Mary’s are closing in on a tipping point and they know it. And, now the Clonmel lads have taken the next logical step - St Mary’s are a senior hurling club.

For a report from this final and a video of the trophy presentation ceremony please click here.

Boherlahan-Dualla have made the drop to the junior A grade alongside Roscrea.

One team was scheduled to make the drop following Roscrea’s decision to voluntarily relegate themselves to junior A - therefore Galtee Rovers-St Pecaun avoided the drop while in the last game of the series Lattin-Cullen Gaels faced Boherlahan-Dualla knowing that the loser faced demotion. That contest took place on Saturday at Leahy Park, Cashel and Lattin-Cullen Gaels beat Boherlahan-Dualla 0-16 to 1-11.

On Saturday in Templemore Roscrea claimed the county minor A hurling title for the first time since 1984 when defeating Moycarkey-Borris 3-12 to 0-14.

Meanwhile in Dolla Borrisokane were crowned minor B county hurling champions following their nine-point final win (2-14 to 0-11) over Moyne Templetuohy-Thurles Gaels. For a full report on this encounter please click here.

In the first round of games to determine which side gets relegated to the intermediate grade Drom & Inch beat Cahir 1-11 to 0-13 while Ardfinnan proved far too strong for Fethard in Monroe (1-12 to 0-4) last week. On Saturday afternoon at Seán Treacy Park Drom & Inch won their second successive game when beating Ardfinnan 1-9 to 1-8 while in Monroe Cahir proved too strong for Fethard (1-13 to 2-6).

Kiladangan and Clonmel Óg will meet in the final of the Tipperary Water County Intermediate Football Championship following their respective semi-final wins on Sunday - at New Inn Clonmel Óg beat Moycarkey-Borris 2-12 to 0-8 while at The Ragg Kiladangan proved too strong for Clonoulty-Rossmore (3-7 to 0-6).

In the semi-finals of the Tipperary Water County Junior A Football Championship on Friday evening Loughmore-Castleiney beat Ballylooby-Castlegrace 1-12 to 1-4. Meanwhile on Sunday evening in Clonoulty Knockavilla Kickhams beat Seán Treacy’s 0-8 to 1-3.

In the quarter-finals Seán Treacy’s saw off the challenge of Portroe (1-13 to 0-9), Loughmore-Castleiney proved too strong for Ballingarry (4-7 to 2-9) and Ballylooby-Castlegrace out-classed Gortnahoe-Glengoole (2-13 to 0-4) while Knockavilla Kickhams beat Burgess 1-18 to 1-10.