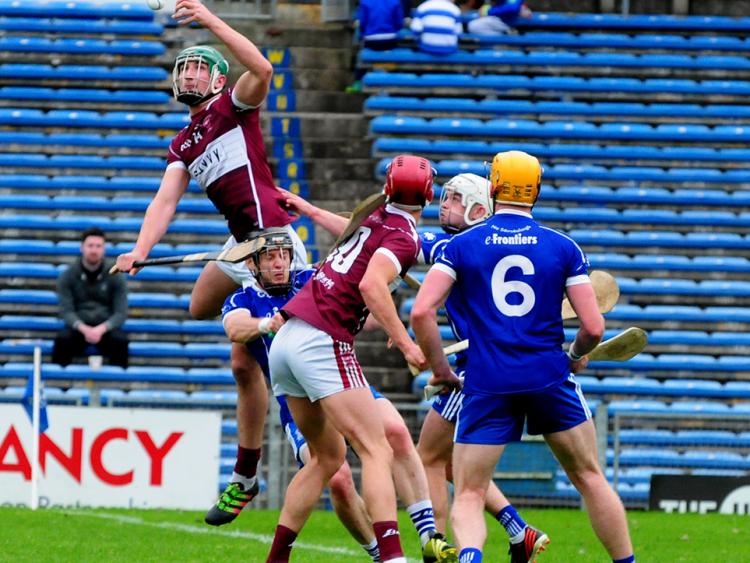 Following Sunday’s heart-breaking 16-point defeat to Thurles Sarsfields in the county senior hurling final Borris-Ileigh’s Brendan Maher tried to keep the entire experience in perspective - Johnny Kelly’s men travelled a huge distance this season. Indeed, Borris-Ileigh were discounted as also-rans last April, but transformed themselves into contenders for the Dan Breen Cup and collected the North title along the way during a rousing season for the men draped in maroon and white.

“When you put it into perspective and when you are honest about it you would have to admit that we didn’t expect to get here (to the final) this year with the team that we have - four of our starting six forwards are under-21,” an emotional Brendan Maher revealed following Sunday’s county final defeat (0-11 to 1-24) at Semple Stadium.

“We are very inexperienced and we haven’t played in a county final. So, look, it does bode well for the future, but when you get to the (final) day you want to make the most out of it and you want to get the performance. It’s just a shame that it didn’t happen.”

“I am really proud and I really enjoyed playing with Borris-Ileigh as I always do, but this year it just felt like it was something special. It’s a pity that it finished the way it did. I am definitely a proud Borris-Ileigh man.”

Thurles Sarsfields stamped their authority on this final in the opening half and led 0-11 to 0-7 at the interval - that reasonably meagre deficit presented Borris-Ileigh with a semblance of hope at the break. Sars, however, had other ideas and out-scored their opponents 1-13 to 0-4 thanks to a devastating second half display.

“I think they were just the better team,” Brendan Maher admitted.

“In fairness they are a super team - they have threats all over the field. We needed to be winning as many individual battles as possible, but that just didn’t happen today,” the former Tipperary captain explained.

“We thought we were defending well against them in the first half, but we just could not seem to get anything out of it going forward. We got a lot of ball down there, but they just stopped our threats up there. I think we only had two points after seventeen or eighteen minutes - we managed to get on a little bit of a run before half-time,” Maher added.

“We said we would try to go out and give it a go in the second half, but, look, they were not going for a four in-a-row by chance. They are an excellent team and now all I just hope, as a Tipperary man, that they can go on from here. I think they have gone close in other years, but they have not gotten over that final hurdle. I just hope they can go on and do it this year.”

And, it was obvious on Sunday evening that Brendan Maher admires the effort that Thurles Sarsfields put into their preparation and their togetherness on the field of play.

“That is why they are so good. You can say all you want about them - that they have the players on paper, but they are an excellent team,” Brendan Maher insisted.

“They play very well as a team and that was something that I noticed. I was moved up forward there and I think it was something like 1-20 to ten points and they were still shouting at each other. They were organizing and that is the sign of a brilliant team,” Maher added.

The one major positive that Borris-Ileigh can take from the sixteen-point county final defeat is that Johnny Kelly, the Portumna man who did so much to transform their fortunes this season, has announced that he wishes to stay on as senior hurling manager.

“I would say that I will be back - they are great guys and they have put in a huge effort. It is not easy when you suffer a defeat like that after having such a good year. To get beaten by sixteen points would sicken you. They can take heart from what they have done during the year. They have laid to rest some psychological barriers, but it takes a bit to win a county final. You really have to go through it and live it before you can do it - that will stand to them in time,” Johnny Kelly told the Tipperary Star.

Johnny Kelly was joined on the management team by selectors Philip Kenny, Philip Maher and John McGrath while Angelo Walsh took responsibility for the strength and conditioning work of the side.

“We knew coming down that they were a serious outfit - I think they really went to town on us in the second half,” Johnny Kelly explained as his thoughts turned to the prevailing patterns in the county final.

“We were disappointed with the way that we played to be honest about it. We tried things and it didn’t work. You have those days and it being a county final it can be a difficult thing to get over,” the Portumna man said.

“There is progress made, absolutely, and we turned a corner. Four of our forwards were under-21 and while they tried manfully up there it’s not easy when you are coming up against the likes of Pádraic Maher, Ronan Maher and Mickey Cahill. You are always going to struggle up there. I really don’t know off the top of my head where it went wrong only that it went wrong in a lot of different places. It was a very hard thing to rectify it.”

“At half-time we felt that we had got a grip around the middle and we toyed with the idea of pushing up on them, but we said we would leave it and then we made mistakes at the start of the second half. They really capitalized on those - handling errors and decision-making at times wasn’t good,” Johnny Kelly said.

“Thurles Sarsfields stick to what they are good at, they will not panic, they are good in the tackle, they slip out and they always give the man in the best position the ball. They are a serious team and I really wish them the best of luck and hope they go on and win Munster.”