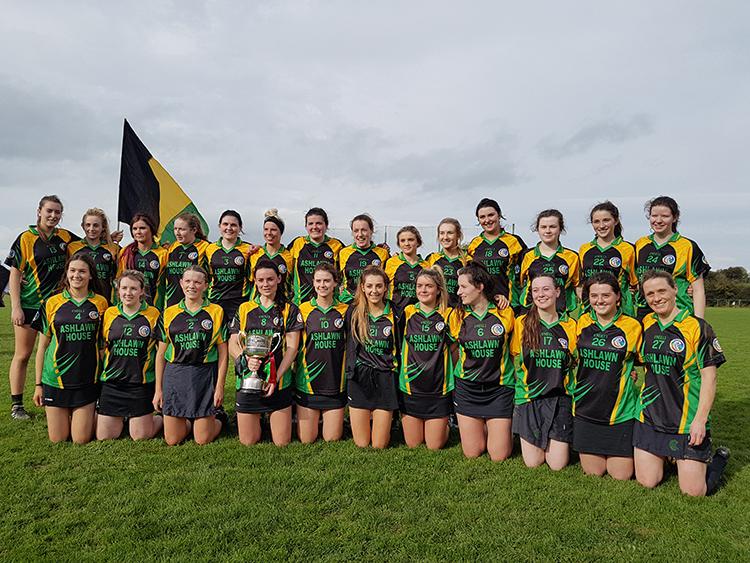 Burgess-Duharra collected the Bernie O’Dowd Cup for the sixth successive year at The Ragg on Saturday afternoon following an eight-point win over Drom & Inch.

Under manager Pat Cremin Burgess-Duharra were outstanding from a defensive point of view in the opening half against the wind - wing-forwards Shona O’Donoghue and Jenny Grace protected their half-backs while midfielders Ciara McKeogh and Ruth Barry blocked the middle and allowed Ciardha Maher to drop back and read the play which the inter-county star did superbly.

Drom & Inch struggled to make any real impression in an attacking sense despite playing with a strong wind and the defending champions led 0-10 to 0-9 at the interval. Indeed, that solid body of work in the opening half set Burgess-Duharra up for a commanding post-break display.

Caoimhe Maher, Ciara McKeogh and Tara Kennedy were outstanding for the champions, but the player of the match award had to fall to Jenny Grace who finished the game with a one hundred per cent return from placed balls (0-14), worked tirelessly, notched scores from play (0-2) and created a series of scores for her teammates.

Meanwhile Drom & Inch will be cursing their misfortune following this final - a couple of key goal-scoring chances went a-begging when the momentum of this decider was up for grabs. And, you would also imagine that conceding twenty-three frees was not part of the game plan (playing with the wind in the opening half the challengers conceded fourteen frees).

The sides traded frees during the opening eleven minutes with Burgess-Duharra enjoying the better of the exchange and led 0-4 to 0-3.

Drom & Inch ‘keeper Caoimhe Bourke conjured a superb save to deny Tara Kennedy a goal before Amy Kennedy set up Jenny Grace for the first score from play in the 13th minute. Drom responded with a fourth Niamh Treacy free before the challengers pieced together a smashing move and Joanne Ryan tied the game in the 18th minute (0-5 apiece).

A key moment materialized in the 20th minute when Karen Purcell appeared to have Ciara Holohan’s goal at her mercy, but Gemma Grace recovered just in time to dispossess the threatening wing-forward. In a flash Burgess-Duharra countered, Jenny Grace won a free and the wing-forward converted. Then, from the resultant puck-out, Grace intercepted the Drom & Inch re-start, played a one-two with Tara Kennedy and fired Burgess-Duharra into a 0-7 to 0-5 lead.

Noirín Kirwan and Miriam Campion responded for Drom & Inch before Jenny Grace and Niamh Treacy traded placed balls. In the first minute of first half injury time another Joanne Ryan strike tied the game before a Grace free presented Burgess-Duharra with a 0-10 to 0-9 interval lead.

Points from Jenny Grace (free) and Amy Kennedy opened a three-point gap before Drom & Inch carved Burgess-Duharra open in the 37th minute - Karen Purcell picked out Mairéad Eviston inside the 21-yard line with a superb stick pass, but, unfortunately, the raiding midfielder found the crossbar with a rasping effort.

Burgess-Duharra then took complete control and hit six points without reply - an Amy Kennedy effort launched the onslaught. And, what was noticeable about this particular strike in the 41st minute was the disciplined tackling of the Burgess-Duharra forwards. The ball was turned over, moved smartly and Kennedy finished.

Four consecutive Jenny Grace frees then added to the Burgess-Duharra tally before an Eimear McDonnell strike left nine between the sides in the 53rd minute (0-18 to 0-9).

The Drom & Inch supporters found something significant to cheer in the 54th minute when Miriam Campion set up Noirín Kirwan for a cracking goal to reduce the deficit to six.

Burgess-Duharra responded emphatically, however, when scoring 1-2 without reply. Ciardha Maher belted over a point before Eimear McDonnell buried a goal following brave work from Tara Kennedy in the 56th minute. Jenny Grace added a free soon after and Burgess-Duharra led 1-20 to 1-9.

The challengers refused to give in and were rewarded for their honesty with a late goal - Joanne Ryan set up Niamh Treacy for a hand-passed finish in the 62nd minute before points from Treacy and Amy Kennedy brought the scoring to a conclusion.