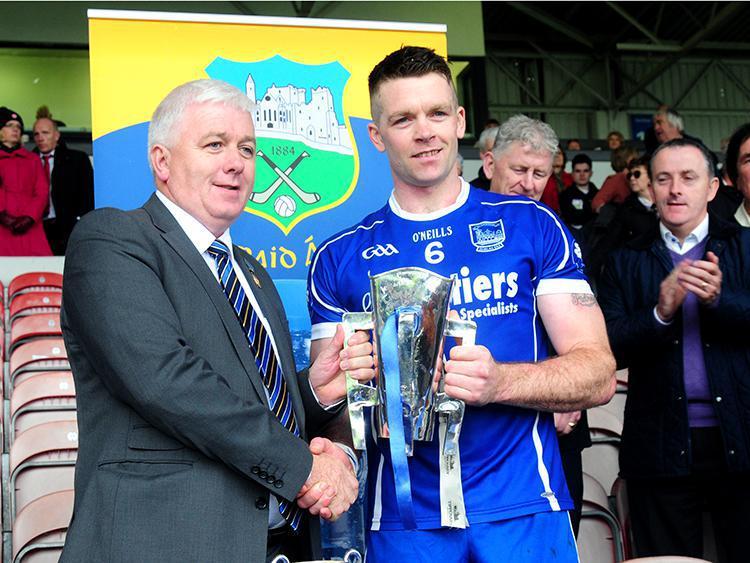 Secretary Tim Floyd has challenged the clubs of Tipperary to propose a new fixtures programme for the county. On Tuesday night, October 17th the County Board hosted a ‘Club Forum’ in the Anner Hotel, Thurles - the event represented an opportunity for players and club officers to have their say in the future of Gaelic games in the county. And, following the forum Tim Floyd asked the club delegates to “think seriously” before submitting motions.

The structure of the 2018 club championship in Tipperary will be determined at the November meeting of the County Board and the executive are inviting clubs to propose motions regarding potential formats for the hurling and football championships before the deadline of Friday, November 17th.

The forum on October 17th featured presentations by Paudie O'Neill (chairman of the National Hurling Development Committee), Peter Twiss (secretary of the Kerry County Board), members of the Tipperary Competitions Control Committee and Paddy Stapleton (Borris-Ileigh) before Tipperary County Council CEO Joe MacGrath guided those in attendance through a workshop and chaired a discussion on the key issues.

During his presentation to the forum Paudie O’Neill went through the changes made to the inter-county fixtures programme at a national level which will have a significant impact on the club game - the former Tipperary coach explained that following the decision made to introduce a round robin series of games to the provincial hurling championships two key club time frames have been introduced to the fixtures calendar.

From 2018 the national leagues will run from January to March meaning that April has been ring-fenced to accommodate club fixtures while the inter-county championship series of games starts in May. Mr O’Neill also revealed that from August 12th 2018 the only inter-county teams remaining in competition will be the All-Ireland hurling and football finalists. Therefore, Mr O’Neill argued, the remainder of the year will be dedicated solely to club games.

That structure means that fifteen weekends are left to play club championship games. And, that is without taking into account the possibility that the Tipperary hurlers/footballers could qualify for the All-Ireland final or the under-21 hurling team could reach their respective All-Ireland final (scheduled to take place in late August) - either eventuality would reduce the number of weekends available by a significant margin.

Essentially, given the current structure of the Tipperary club football and hurling championships it is not physically possible to leave the format as is. Indeed, Paudie O’Neill captured the issue succinctly when he explained that “standing still is not an option”.

John Devane, the chairman of the County Competitions Control Committee (CCC), explained that “it is our job on the CCC to implement whatever competition structures are passed at the County Board meeting in November”. Mr Devane, however, also explained that the members of the CCC faced “huge difficulties” before asking delegates: “can we find a better way of doing this?”

Kerry County Board secretary Peter Twiss made a detailed presentation on the Kingdom’s competition structures (73 clubs). A key factor in Mr Twiss’ presentation was that the divisional championships and county championships in Kerry were disconnected (the divisional championships do not represent a route into the county series). Mr Twiss spoke in detail about an enlightened competition structure which works and is based on a co-operative relationship between the County Board, divisional boards and the individual clubs.

A resounding feature of Tuesday night’s forum was the contribution made by players to the discussion and, especially, Paddy Stapleton who captained Borris-Ileigh to a famous win in the North Tipperary Senior Hurling Championship this season. Indeed, Paddy Stapleton stole the show when the former inter-county corner-back, during a genuine and heartfelt speech, described the retention of the divisional championships as “unbelievably important”. The Borris-Ileigh stalwart described the experience of captaining his club side to a North title as “a day you can only dream of”.

“To win the North final was as good as anything I have ever experienced,” Paddy Stapleton said before he encouraged those present to preserve the significance of the divisional championships in Tipperary.

Mr Stapleton also warned that the issue with regard to club structures was “heating up” and “coming to a boiling point”.

Tipperary County Council CEO Joe MacGrath guided delegates through a detailed workshop on the fixtures issue and also chaired a discussion based on a series of questions which were designed to spark debate.

Joe MacGrath described the issue as a “challenge and an opportunity” while the proud Nenagh man asked all present “to look forward” (not back). Mr MacGrath also observed that the key issue at play was the relationship between the divisional championships and the county series. Indeed, when summing up the meeting Joe MacGrath admitted that there was “no emerging consensus” and that it is difficult to “make a decision which will encompass all of those views”. Mr MacGrath also encouraged delegates to recognise that “a decision needs to be made”.

Speaking from the floor John Costigan (Tipperary Fixtures Analyst) revealed that the “convoluted championship system” in Tipperary was “totally out of kilter with the national scene”.

“Whether we like it or not we are going to have to tailor a club championship for ourselves that will fit into the national fixtures plan,” John Costigan said.

The term for the current format of the county senior hurling championship comes to a conclusion this year. And, as part of the County Board's intention to piece together a new strategic plan (2017-2020) for Tipperary the county development committee, as chaired by PJ Maher, sought out the opinions of players, officers and the general public via an online survey earlier this year.

The results of that survey were presented to the April meeting of the County Board along with the new strategic plan proposals which were informed by the issues raised. Indeed, the results of the survey illustrate the need for change.

The proposed re-structure of the club championship is just one element of the 2017-20 Strategic Plan, but it is generating heated debate - the plan could, of course, dilute the significance of the divisional senior hurling championships.

The structure would also mean that no club could be knocked out of their respective championship before July 1st while the divisional championships would be stand-alone competitions (with no qualification route to the county championships).

The draft proposal was unveiled at the April meeting of the County Board and subsequently emailed to all clubs. The purpose of the forum on October 17th was to ensure that all stakeholders were fully informed in advance of the November meeting of the Tipperary County Board when the format for the 2018 club championships will be determined. Clubs now enjoy an opportunity to submit motions with regard to the running of the championships in Tipperary - the motions will be voted upon and a decision made in November.

CCC secretary Tom Maher, John Devane and County Board chairman Michael Bourke have pointed out on several occasions and in reasonably blunt terms that the format of the club championships is not fit for purpose. Indeed, CCC chairman John Devane is on the record - there is an “urgent need” to address issues associated with the club fixtures schedule in Tipperary in general and the exact structure of our club competitions in particular.

Speaking to the Tipperary Star earlier this year John Devane argued that “our divisional system is in place for over one hundred years and has played a significant role in the development of the GAA in Tipperary. Tipperary is a large county and there is a need for our divisions now and into the future. However, retaining the link between divisional and county championships in many grades is difficult to justify and adds huge complications to our competitions”.

During the September meeting of the County Board Mr Devane described the competition structures in Tipperary as “crazy” while Tom Maher, the secretary of the CCC, asked delegates to “look at the wider picture”.

At the club forum Tom Maher asked clubs to submit detailed motions to the November meeting of the County Board.

“Now is the time to put it all down on paper,” Tom Maher said.

“It is a far more difficult problem to put it all down on paper than to talk about it,” the secretary of the CCC revealed before asking delegates to ensure that football, hurling, dual clubs and divisional championships are all catered for in motions submitted for consideration.