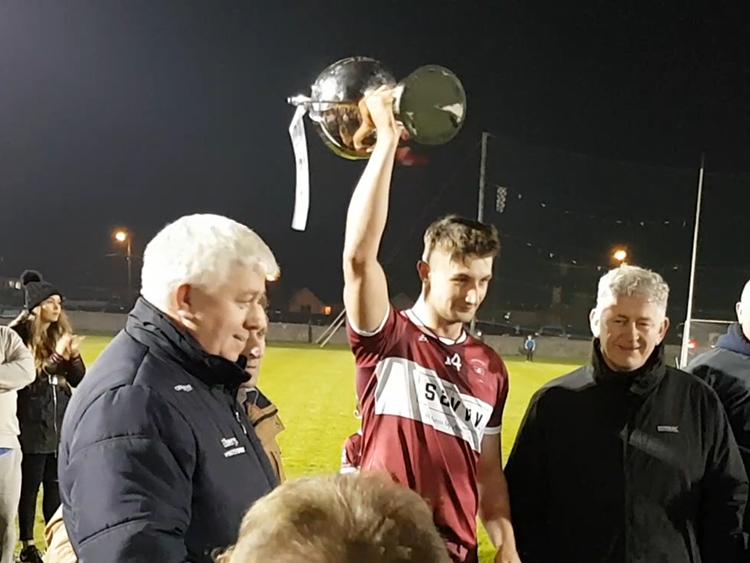 Borris-Ileigh collected the Johnny Ryan Cup following a 15-point win over Drom & Inch at Borrisoleigh on Friday night in the division one final of the Tipperary Water County Hurling League.

And, this was impressive stuff from Borris-Ileigh. Although Drom & Inch were miles off their best Johnny Kelly’s men were most obviously eager to maintain the standards set this season.

This year Borris-Ileigh won two of the three cups on offer to them and although they shipped a heavy defeat to Thurles Sarsfields in the county senior hurling final this group of players appear an ambitious lot. Indeed, when accepting the cup from County Board chairman Michael Bourke stand-in captain Conor Kenny emphasised the fact that Borris-Ileigh aimed to improve and come back even stronger in 2018.

Brendan Maher, Conor Kenny, Dan McCormack and man of the match Jerry Kelly were outstanding in this reasonably one-sided contest while Johnny Ryan, Jamie Moloney and David Collins did their utmost to stem the tide from a Drom & Inch point of view.

Drom & Inch were still in touch at the break when trailing 0-6 to 0-9, but Borris-Ileigh utterly dominated the second half. Drom & Inch’s challenge was debilitated by a number of notable absentees and by the fact that they had exited the championship on September 24th.

Three points from Johnny Ryan (two frees) kept Drom & Inch in touch during the opening ten minutes while efforts from Conor Kenny, Dan McCormack, Brendan Maher (free) and Seán McCormack helped the home side into a 0-4 to 0-3 lead.

Points from Kieran Maher, Brendan Maher (free) and Jerry Kelly (free) opened a four-point gap (0-7 to 0-3), but Drom & Inch hit back thanks a Stevie Nolan effort and a long-range monster from Johnny Ryan following a sharp re-start from Damien Young.

A misfortunate collision saw both Campions replaced in the 21st minute and Drom & Inch’s poor run of luck persisted in the 24th minute when a glorious left-handed point from the stick of David Collins was inexplicably waved wide.

The opening ten minutes of the second half were reasonably well-contested. Indeed, with 20 minutes to play Drom & Inch were just a break of a ball away from the home side (0-12 to 0-9). Brendan Maher (free), Dan McCormack and Conor Kenny were on the mark for Borris-Ileigh during this period while David Collins, Johnny Ryan and David Butler responded for the visitors.

Efforts from Brendan Maher (two, one free) and Jerry Kelly opened a six-point gap and although David Collins landed a cracker Borris-Ileigh struck for the opening goal in the 45th minute - Conor Kenny broke the line and fed Niall Kenny who made no mistake from close range. Johnny Ryan landed a long-range point in response, but Borris-Ileigh plundered their second goal in the 47th minute when Jerry Kelly planted a brilliant left-handed shot in the top left hand corner (2-15 to 0-11).

Subsequent to that three-pointer efforts from Aidan Cowan, Conor Kenny (free), Dan McCormack and Jerry Kelly helped Borris-Ileigh into a 2-19 to 0-11 lead.

James Ryan and Johnny Ryan closed out the scoring from a Drom & Inch point of view while Jerry Kelly set up Cathal Bourke for Borris-Ileigh’s third goal in the 61st minute.