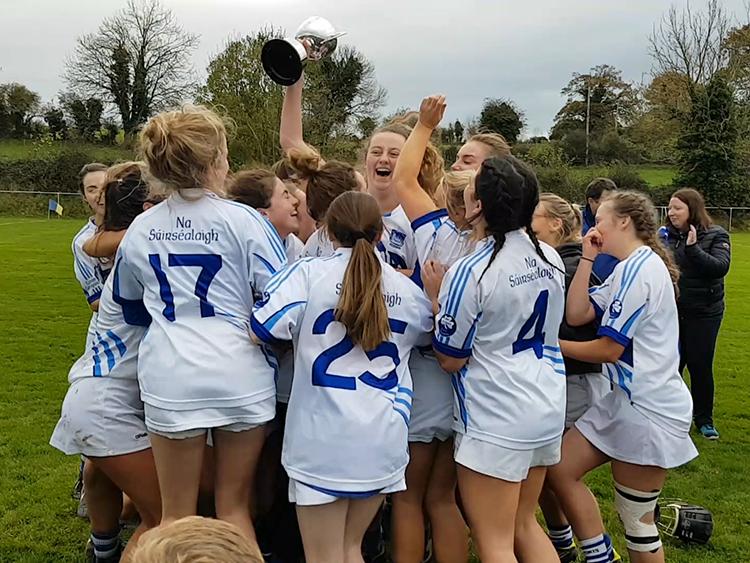 Thurles Sarsfields celebrated a narrow win over Toomevara in the junior A county final.

The Thurles Sarsfields came back from seven points down in the opening half to win the county junior A Camogie championship final at The Ragg on Saturday afternoon. The Blues, who were inspired by outstanding centre-back Karen Kennedy, edged an absolute thriller, but that fact won’t prove much consolation to a Toomevara side who suffered their third consecutive county final defeat.

Toomevara took off like a rocket in this encounter. Moira Ryan was hurling up a storm at the heart of the Toome defence while Aoife Ryan was playing out of her skin on the inside line. Indeed, following a whirlwind opening nineteen minutes Toomevara led 0-8 to 0-1.

Thurles Sarsfields, however, steadied themselves and following a Laura Loughnane goal trailed by just a point at the break (1-4 to 0-8). And, based on an exhibition of free-taking from Róisín Corbett and the athleticism of players like Andrea, Laura and Nicola Loughnane the Blues clung on for a famous win.

Watch Thurles Sarsfields' Andrea Loughnane and Róisín Corbett collect the cup following the Blues' narrow win over Toomevara (1-11 to 1-10) in the county junior A Camogie championship final at The Ragg.

Toomevara were outstanding during the opening third of this contest and the manner in which the side celebrated turnover ball won suggested that the Greyhounds meant business. Indeed, before Thurles Sarsfields knew where they were Toome had opening a four-point gap thanks to efforts from Aideen Hogan (two), Bonny Kennedy and Aoife Ryan.

Thurles Sarsfields got off the mark thanks a Róisín Corbett free in the tenth minute, but the Toome onslaught continued with points from Elaine Young (two), Aoife Ryan and Aideen Hogan (’50) forcing Toomevara into a 0-8 to 0-1 lead by the 19th minute.

The Sars’ defence was struggling to contain Aoife Ryan and following an Elaine Young delivery in the 16th minute the corner-forward was fouled for a penalty. Thurles were now in danger of finding themselves cut adrift, but up stepped ‘keeper Siobhán Hennessy to save Aideen Hogan’s rasper.

A Róisín Corbett free in the 21st minute steadied Sarsfields before the Blues scored their first point from play through Sarah Stakelum in the 22nd minute. Then Thurles struck for the opening goal of the game in the 23rd minute - Róisín Corbett played in Laura Loughnane who shipped serious punishment from a hard-tackling Toomevara defence before finishing off her right (0-8 to 1-3).

In the 25th minute Toomevara were left cursing their misfortune once more - Marguerite Young and Aideen Hogan combined before creating a goal-scoring opportunity for Mary Grace, but the wing-forward’s effort was saved by Thurles ‘keeper Siobhán Hennessy.

A Róisín Corbett free closed out the half and Sarsfields trailed by a single point at the break (1-4 to 0-8).

Two more Corbett frees forced Thurles Sarsfields into the lead for the first time in the 38th minute. Three minutes later Toomevara hit back with their first score in twenty-two minutes thanks to an Aideen Hogan free.

Toome followed that effort up with a Bonny Kennedy point before the misfortunate Siobhán Hennessy was deceived in the 43rd minute by an Aoife Ryan shot which dropped short and, suddenly, Toomevara led 1-10 to 1-6 entering the final quarter.

Thurles Sarsfields, however, refused to panic and hit back with consecutive placed balls from Róisín Corbett before the Blues created a goal-scoring opportunity of their own in the 49th minute - Toome ‘keeper Paula Ryan did well to save a Laura Loughnane shot. Róisín Corbett converted the resultant ’50 and then, in the 52nd minute, Corbett landed another placed ball to tie the game (1-10 apiece).

The Sars saved the best score of the game for the 58th minute - Nicola Loughnane won a turnover ball in the middle third and the wing-forward broke through the Toomevara half-back line before setting up Laura Loughnane for a terrific winning point.

Eight minutes remained to be played (six minutes of injury time) and although Toomevara tried desperately hard to manufacture an equaliser Thurles Sarsfields proved fitting champions on this occasion.