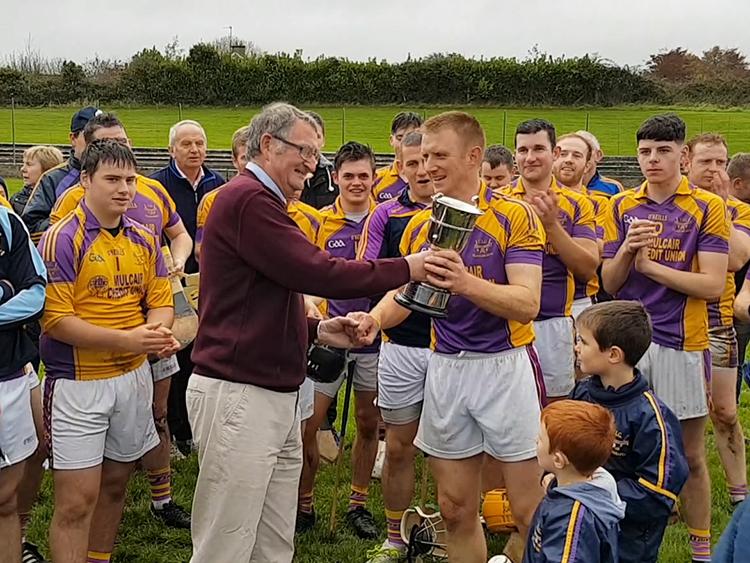 Newport, who were reduced to fourteen men as early as 29th minute, edged the North Tipperary Junior B Hurling Championship final at MacDonagh Park, Nenagh on Saturday afternoon. Newport led by six points early on, but found themselves trailing by two deep inside the final ten minutes before a Liam Duffy goal sealed a rousing win.

Team captain Mike Coffey and full-back Paddy Jones were outstanding for Newport while Vinny Moloney was an excellent candidate for the man of the match award. Jamie Lewis shone out for Lorrha-Dorrha as did inside forward Jack Maher.

Watch Newport captain Mike Coffey give an inspirational speech following his side’s narrow victory (1-15 to 0-16) over Lorrha-Dorrha in the North Tipperary Junior B Hurling Championship final at MacDonagh Park, Nenagh on Saturday afternoon.

The sides traded points early on before Newport took control. The game was tied on 0-3 apiece in the seventh minute before Newport hit six points without reply to take a 0-9 to 0-3 lead as early as the 15th minute.

Newport were utterly dominant during this period and a long-range effort from Christy O’Connor launched the onslaught. Four points from outstanding centre-forward Vinny Moloney (three frees) also featured while Moloney set up Christy Koyce for another cracker.

Lorrha-Dorrha responded through Jamie Lewis (free) and Jack Maher (free), but Newport, following a Christy Doyle point, led 0-10 to 0-5 when Christy O’Connor was sent off for a second bookable offence in the 29th minute following a trip on Willie Maher. Jack Maher converted the resultant free and Lorrha-Dorrha trailed by a very manageable four (0-10 to 0-6) at the break.

Four points inside the opening eight minutes of the second half tied the game - efforts from Noel Hogan, Michael Dolan and Donal Kennedy dragged Lorrha-Dorrha to within touching distance before Jamie Lewis shortened his grip beautifully in the 38th minute and landed a brilliant equaliser off his left. Indeed, Lorrha-Dorrha also threatened to score a vital goal in the 32nd minute, but Newport ‘keeper Paul Hogan denied Jack Maher with a superb save.

Newport needed a score badly and found one in the 39th minute when Vinny Moloney set-up Christy Koyce. Jamie Lewis responded with a long-range free and Lorrha-Dorrha took the lead in the 42nd minute when Willie Hough struck from play (0-12 to 0-11).

Newport clung on thanks to a Vinny Moloney free, but successive points from Jack Maher (free), Willie Hough and Michael Dolan forced Lorrha-Dorrha into a 0-15 to 0-12 lead by the 51st minute. Indeed, the style of Dolan’s strike was especially eye-catching - Jack Maher recycled beautifully out of the right corner and the wing-forward drilled over his strike.

Another Vinny Moloney point left two in it before Newport created two goal-scoring opportunities - Christy Doyle demanded a great save from Trevor Hogan in the 53rd minute following good play from Moloney while Jamie Lewis blocked Mike McKeogh’s follow-up effort seconds later. Vinny Moloney, however, converted the resultant ’65 to leave one in it.

Then, in the 57th minute, the key score materialised - Vinny Moloney’s awkward free struck the right hand post and dropped into the square. And, there was Liam Duffy to boot home a crucial goal. A minute later Christy Doyle lashed over another Newport point to leave three points between the sides. Lorrha-Dorrha tried valiantly to respond, but all they could muster was a Jamie Lewis free.