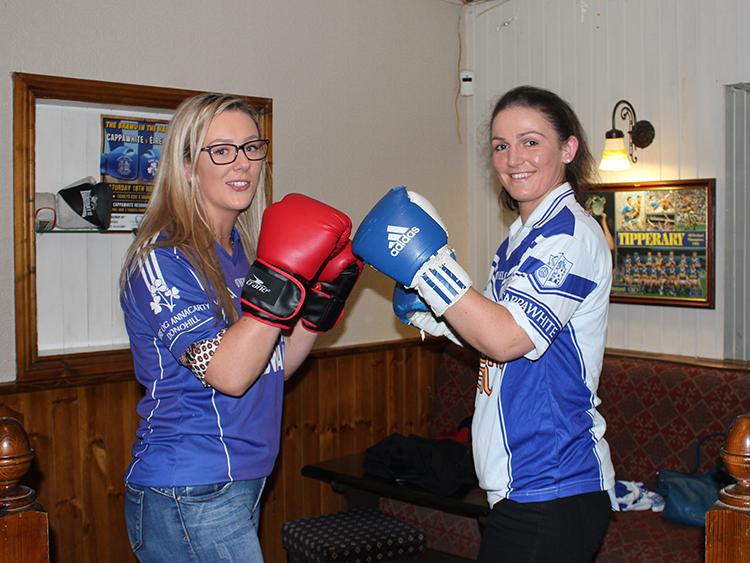 Sinéad Buckley (Éire Óg Annacarty) and Siobhán O'Neill (Cappawhite) are in training for ‘The Brawl In The Hall’.

The launch night for the Cappawhite and Éire Óg Annacarty-Donohill GAA clubs’ white collar boxing night entitled ‘The Brawl in the Hall’ was held on Saturday in Jerry Jacks Bar, Annacarty.

The main competition sponsor John Ryan of the Pembroke Hotel, Kilkenny officially launched the event which will take place in the Cappawhite Resource Centre on Saturday, November 18th from 7pm. John wished both clubs every success with the event and outlined how proud he is to be associated with it having played for Éire Óg and in combinations with Cappawhite in the past.

The launch was also attended by boxers from both clubs and representatives of local businesses who are supporting the fundraising by sponsoring the boxers. Johnny Looby got everyone speculating about the boxing match ups and provided some entertainment on his forecasts for the 18th of November.

The fundraiser which brings both West Tipperary clubs together to host the event will be a fantastic night’s entertainment with almost 40 boxers lined up to showcase their talents.

Both clubs would like to thank Colm O’Neill of Jerry Jacks for hosting the launch night, John Ryan Pembroke Hotel, Kilkenny, the boxers, local sponsors and to everyone involved with the event.

Best of luck to everyone involved.