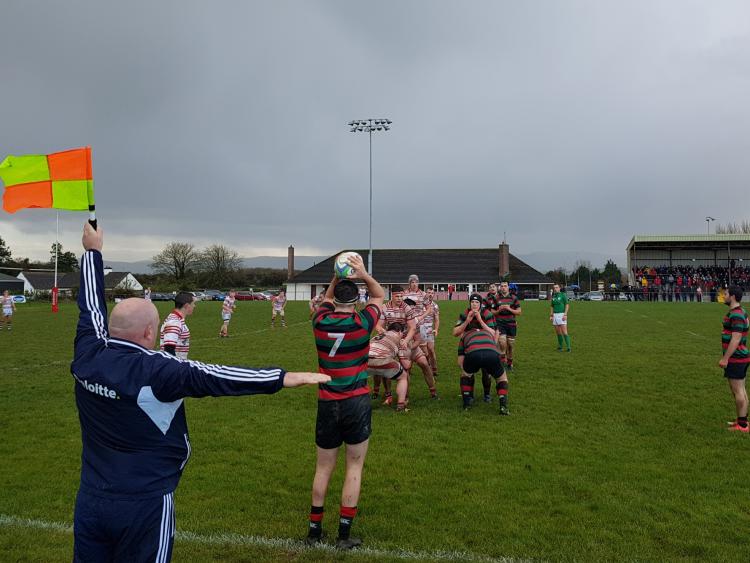 Nenagh Ormond suffered a fifteen-point defeat at home to Highfield in division 2A of the Ulster Bank League on Saturday afternoon at New Ormond Park. The Cork outfit dominated this encounter from start to finish and considering this result next Friday night’s clash with Cashel RFC now takes on an added significance for Nenagh.

Considering the fact that both Nenagh Ormond and Cashel RFC lost on Saturday both sides will be very eager to win their local derby on Friday, November 10th at Spafield, Cashel (7.30pm).

On Saturday Cashel RFC lost 8-19 away to Galway Corinthians and now find themselves sixth in the division 2A table twelve points off the lead with six rounds played while Nenagh Ormond are joint second alongside Queen's University and Highfield seven points behind Malone who have a one hundred per cent record this season.

Playing with the aid of the elements at their back in the opening half Highfield roared into a 18-3 interval lead. The efforts of the Cork men were supplement by the sin-binning of Nenagh Ormond captain Jonathan Healy in the tenth minute and although the home side looked to rouse themselves after the break the Nenagh lads were restricted by the sin-binning of Willie O’Connor five minutes into the second half.

Highfield took the lead thanks to a penalty in the sixth minute and although reduced to fourteen men Nenagh Ormond responded with three points Clayton Stewart in the 18th. And, just when it seemed that Nenagh had weathered the early storm a missed tackle in the 20th minute allowed the visitors to scoot in for a converted try (3-10).

Seven minutes later Highfield added a penalty to their tally and during the closing ten minutes of the opening half kicked a series of penalties into the corner. Nenagh defended superbly for some time before Highfield notched a second try in the corner.

Considering the standard that Nenagh Ormond set for themselves last season the management team of Ivan Muldoon (head coach) and John Long (manager) will be disappointed by the manner of the try conceded six minutes into the second half.

Although the home side were down to fourteen men Highfield crossed the whitewash reasonably easy - two phases on from a line-out the Cork lads added a converted try. Three minutes later Highfield countered from deep inside their own half for another converted try which presented the visitors with 32-3 lead.

With fifteen minutes to play Nenagh Ormond plundered a try when a series of scrum infractions deep inside the Highfield 22 led to a penalty try. Nenagh, to their credit, kept plugging away and in the 69th minute Johnny Hayes scored a second try for the home side with a smashing one-handed finish. Clayton Stewart added the extras and the deficit was reduced to seventeen (15-32) entering the final ten minutes.

Highfield responded emphatically with a try of their down five minutes later before Niall O’Gorman off-loaded to John Coffey in the 80th minute and the prop raced through to score a cracking try.