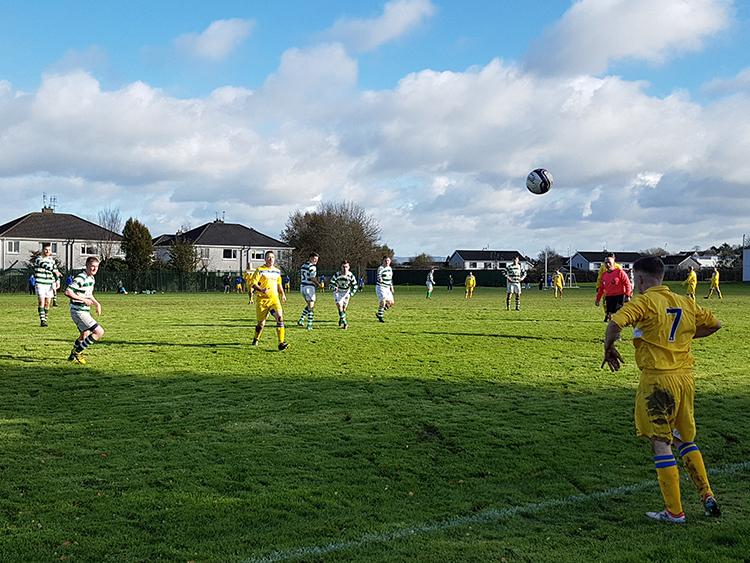 Thurles Town took a significant step in their bid to retain the North Tipperary & District League Premier Division title when seeing off the game challenge of Nenagh Celtic in Nenagh on Sunday - Robbie Ryan’s Celtic team are considered league contenders and this win has propelled Noel Byrne’s side three points clear at the summit of the division and six clear of the Nenagh outfit with six rounds of games played.

Thurles Town completed the 2016-17 league season undefeated and are on course to replicate that feat in 2017-18. That said Town were pushed to the limit on Sunday when Nenagh Celtic fought back late on in this encounter. Indeed, Thurles Town did well to hold off Celtic in a frantic final quarter.

Aidan Keenan was superb for Thurles Town as was Paul Kirwan who performs a vital role for the league champions who took the lead in the opening minute thanks to a right foot strike from Joe Moloney inside fifty-three seconds.

Five minutes later Celtic ‘keeper Darren Corcoran made a fine save to deny Ross King, but Thurles Town doubled their tally in the 22nd minute when the misfortunate Corcoran spilled a shot and there was Paul Kirwan to slot home the rebound (0-2).

Nenagh Celtic came agonisingly close to opening their account in the 26th minute when Mark Walsh’s free kick appeared to have Thurles ‘keeper Graeme Loughman beaten, but Aaron Ryan managed to deflect the shot over.

Celtic rallied in the second half and carved out another good opening in the 54th minute when Graeme Loughman saved a stinging effort from Danny Ryan. Four minutes later Darren Corcoran did especially well to deny Paul Kirwan, but the league champions notched their third goal in the 67th minute when Ross King turned his man beautifully and rifled home a smashing goal (0-3).

Adam Healy roused the home side with a terrific goal in the 71st minute following a mix-up in the Thurles defence. Ten minutes later Graeme Loughman saved a Mark Walsh header as Thurles Town appeared to be wobbling. Indeed, Noel Byrne’s side coughed up a whole series of free kicks which invited needless pressure during the final quarter.

And, Thurles Town paid for their indiscipline in the 86th minute when Jimmy Hynes’ header was saved, but Mark Walsh stabbed home the rebound (2-3).

Thurles Town steadied themselves in the closing minutes of this encounter with only a long-range effort from Shaun Kevin, which flew over the bar, threatening to earn the home side a share of the points.