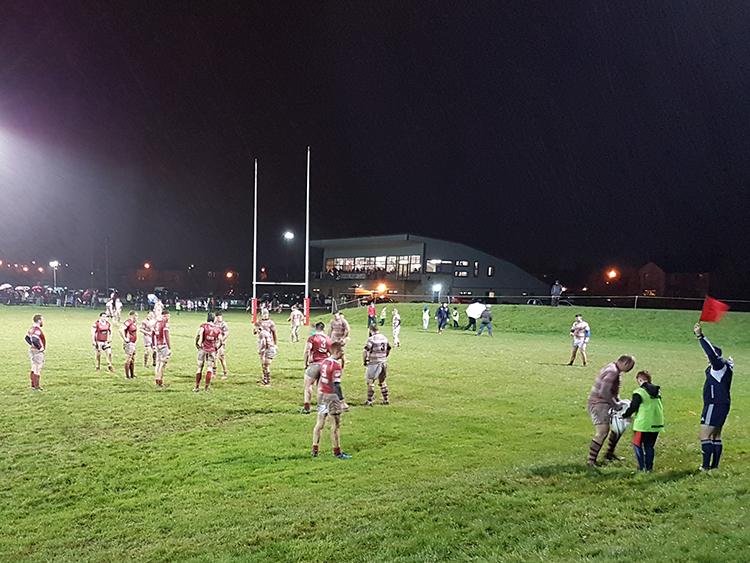 In appalling conditions at Spafield on Friday night Cashel RFC beat Nenagh Ormond (10-6) in an enthralling contest in division 2A of the Ulster Bank League.

Ultimately a superb try from Eamon Connolly in the 30th minute settled the issue and although this encounter proved to be a low-scoring affair the physical battle was gripping. Indeed, the return match between the sides on Friday, January 5th in Nenagh is one to mark down in the diary.

Cashel RFC’s fourth win of the season helps the Denis Leamy-coached side into fifth place in the table (two points behind Nenagh Ormond and eight off Malone at the summit of the division with seven games played). Cashel RFC now enjoy a two-week break before facing the trip to Woodleigh Park in Cork to face an in-form Highfield side on Saturday, November 25th.

Nenagh Ormond have now lost consecutive games in the division and significant momentum this season. Indeed, losing to Highfield RFC and Cashel RFC on the bounce is hardly ideal preparation for next weekend’s historic appearance in the Charity Cup final before the North Tipperary club returns to division 2A action at home to Galwegians on Saturday, November 25th.

In the driving rain at Spafield Nenagh Ormond elected to run an early penalty, but the manner in which the home side defended their line suggested that Cashel RFC were well up for the fight.

In the sixth minute Nenagh Ormond full-back Jamie McGrarry was sin-binned for tackling Brian Fitzpatrick in the air and three minutes later Cashel RFC looked certain to score, but the visitors clung on and finally forced a knock on in what appeared a significant moment in this contest.

In the 14th minute Nenagh Ormond coughed up a penalty, but Darragh Lyons’ shot struck a post and ricocheted wide. Once returned to the full complement of players Nenagh Ormond carved out a real opportunity in the 20th minute, but Clayton Stewart was also off target on an evening which proved particularly testing for kickers. Seven minutes later a high tackle on Jamie McGarry presented Stewart with another kickable opportunity, but the New Zealander steered his shot wide once more.

The key moment in the contest materialised in the 30th minute - in an attack which had all the hallmarks of pre-rehearsed move out-half Darragh Lyons’ picked out winger Brian Fitzpatrick with an ambitious cross-field kick on half way. Fitzpatrick took on the Nenagh Ormond defence out wide before sliding a grubber through and into the path of full-back Eamon Connolly; steady as you like Connolly kept his head and nudged the ball forward before touching down in the corner. Darragh Lyons then landed a glorious conversion from the touch line via a bang off the crossbar (7-0).

Three minutes later Nenagh Ormond enjoyed another opportunity to get off the mark, but the misfortunate Clayton Stewart steered wide.

Nenagh Ormond started the second half in enterprising fashion and finally got off the mark in the 47th minute when following a sustained spell of pressure the home side coughed up a penalty which Clayton Stewart converted.

An unfortunate knock on spoiled a terrific Cashel RFC move in the 51st minute, but the home side stretched their advantage to seven points three minutes later when Darragh Lyons booted over a penalty following a high and dangerous-looking tackle on Michael Casey (10-3).

Ten minutes later a second Clayton Stewart penalty dragged Nenagh Ormond to within touching distance (10-6), but the visitors were reduced to running the ball from deep inside their own half during the closing minutes of this contest and failed to create a try-scoring opportunity which could have rescued the situation.

A bumper crowd will be expected on this historic night as top class rugby returns to the Market's Field for the first time in many years while the proceeds from the final will benefit local charities including St Vincent’s (Lisnagry), the Parkinson’s Association, the Redemptorist Fathers Christmas Poor Campaign, Limerick Marine Search & Rescue and Milford Hospice.

Garryowen, who feature in division 1A of the Ulster Bank League will enter the Charity Cup final as red hot favourites to lift the title - Garryowen have already beaten Young Munster (45-10) and Old Crescent (33-19) in the competition. Meanwhile Nenagh Ormond saw off the challenges of Shannon (14-7) and UL Bohemian (20-17).

Nenagh Ormond are captained by the 22-year-old Jonathan Healy whose father Fergal also captained the club. The side is managed by John Long and the head coach is Ivan Muldoon. Nenagh Ormond feature New Zealander Clayton Stewart at out-half while the side also features some outstanding players in Derek Corcoran, Willie O'Connor, Conor Muldoon and Kevin O'Flaherty.