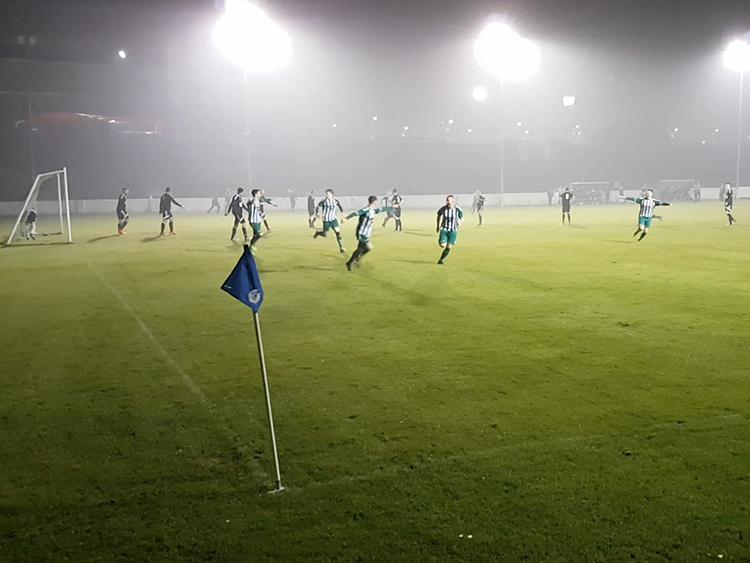 St Michael’s suffered cup final heartache when James Walsh’s men lost the Munster Champions Cup trophy for the second season in succession after extra-time - a Colin Bargary strike presented the Saints with the lead in the 67th minute, but Janesboro struck for a stunning equalizer in the fourth minute of injury time before finding a winner in extra-time.

St Michael’s lost last year’s final to Abbeyfeale United after extra-time and won the competition three years ago when beating Park United in the decider - the Champions Cup was inaugurated in 2012 and pits the winners from all of the provincial leagues against one another.

En route to this final St Michael’s had seen off the challenge of Thurles Town (2-0), Hibernians (Waterford, 4-1) and Shannon Town (Clare, 2-0). And, St Michael’s did well at Jackman Park on Saturday evening to overcome an early wobble before taking a deserved lead while it took an absolute moment of brilliance from Shane Clarke to force extra-time - the former League of Ireland striker cracked home a superb free kick before Keith Mawdsley smacked home the winner.

Irrespective of this result St Michael’s have already made a stellar start to the 2017-18 season - James Walsh’s men are setting the pace in the Tipperary South & District League Premier Division, the Saints have already claimed the Joe Delaney Cup and are through to the last thirty-two in the FAI Junior Cup where they will face Ballinasloe Town (away). St Michael’s are also motoring well in the Munster Junior Cup and take on Clonmel Celtic with a place in the last thirty-two up for grabs in the coming weeks.

That said you can be sure that St Michael’s badly wanted to win the Champions Cup and will be disappointed to leave Jackman Park on Saturday night empty-handed.

Watch: here is the Colin Bargary goal which presented St Michael’s with a 1-0 lead at Jackman Park on Saturday night.

St Michael’s started slowly and almost coughed up a penalty in the second minute when Janesboro’s Thomas Clarke was bundled over in the penalty area. Seven minutes later Janesboro threatened once more, but Keith Mawdsley steered his half-volley wide following a Shane Clarke cross. The Saints created a chance of their own in the 16th minute when Joey Mulcahy played in Colin Bargary, but Janesboro ‘keeper John Mulready was smartly off his line to save.

The sides proceeded to trade opportunities for the remainder of the half. Jonathan Kennedy intervened to deny Keith Mawdsley a clear goal-scoring opportunity in the 20th minute while John Mulready got his fingertips to an Oliver O’Driscoll volley in the 23rd following terrific work from Richie Ryan. The Saints’ Adrian Walsh conjured a great save to deny Shane Clarke in the 28th minute and although St Michael’s had now established a foothold in the game for themselves by the break both centre-halves had already been cautioned.

St Michael’s were far more composed in the second half and exerted a fair degree of control on this contest. Indeed, the Saints came close to taking the lead in the 48th minute when Jimmy Carr played in Oliver O’Driscoll, but John Mulready was sharply off the line to save once more. Five minutes later Janesboro hacked an in-swinging corner from Joey Mulcahy off their line before the Saints threatened again in the 62nd minute - this time Jimmy Carr’s cross was scrambled out to Shane Ryan. The midfielder’s effort was blocked and when the rebound fell to Joey Mulcahy the Saints star managed to steer a right foot shot around a pile of bodies, but there was John Mulready to pull off another excellent save.

St Michael’s took a deserved lead in the 67th minute when Joey Mulcahy clipped a free kick to the far post; Paul Breen squared the ball back across the area and there was Colin Bargary to stab home the opening goal of the game.

The Saints came agonizingly close to doubling their lead in the 81st minute when Shane Ryan dinked a beauty in over the advancing Janesboro back four - Richie Ryan’s well-timed run sprung the offside trap, but John Mulready advanced to bravely smother the left winger’s effort and Oliver O’Driscoll lifted his follow-up effort over the ‘Boro bar. Unfortunately Richie Ryan was injured in the collision with the Janesboro ‘keeper and was stretchered off as a result.

Janesboro poured forward in search of an equalizer and threatened to score one in the 89th minute when Adrian Walsh got a fingertip to a stinging Kevin Murphy drive. There was still time, however, for the Limerick District League champions and in the fourth minute of second half injury time Shane Clarke’s right-footed free kick found the top left hand corner - an exceptional goal.

Janesboro then took the lead in the opening minute of extra-time when Adrian Walsh did well to save an ambitious Daniel O’Neill effort, but Keith Mawdsley was on hand to bury the rebound. Seconds later St Michael’s were almost back on terms, but Rodrigo Goncalves just could not get a touch to Luke Quinn’s cross.

The Saints, however, struggled to create any real opportunity of note thereafter and even the re-location of Paul Breen to centre-forward failed to the rescue the situation for the Tipperary South & District League champions.