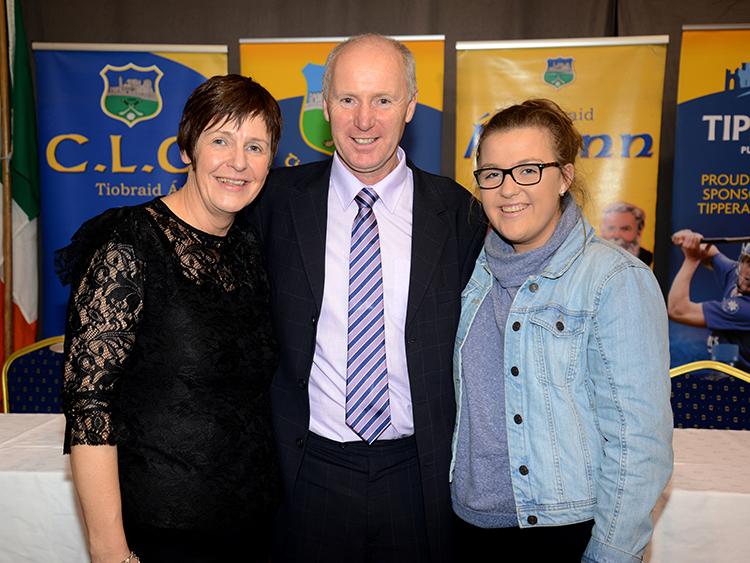 Only one position was contested at the Tipperary County Convention on Sunday, December 17th at The Dome in Thurles. Tom English (Éire Óg Annacarty), Joe Kennedy and Jimmy Minogue had been nominated for the prestigious post as vice-chairman, but Mr English withdrew prior to the convention.

Not all clubs were fully represented at the convention meaning that the voting power on the evening in The Dome amounted to 225 (as opposed to the full complement of 248). And, following the vote Joe Kennedy edged out Jimmy Minogue 114 to 111 (just two votes either way could have reversed the result).

“I would like to thank everyone for the honour that has been bestowed upon me,” former Mid Tipperary Board chairman Joe Kennedy said.

“It is a huge honour, but I also know that with that honour comes responsibility,” the Moyne-Templetuohy man said before declaring that he would “work to serve each and every corner of this county to the very best of my ability”.

Mr Kennedy also paid tribute to Nenagh Éire Óg’s Jimmy Minogue. Joe Kennedy said that he wished “to compliment Jimmy (Minogue) for the fair and honest way in which he conducted his campaign”.

In response Jimmy Minogue accepted his defeat graciously: “I would like to take this opportunity to congratulate Joe (Kennedy) on his election”.

“I can assure you that you have my support,” Jimmy Minogue added.

Both Michael Bourke (Upperchurch-Drombane) and Seán Nugent (Kilsheelan-Kilcash) were nominated for the role of Munster Council representative, but both withdrew their candidacy leaving Jimmy Minogue (Nenagh Éire Óg) and Ger Ryan (Templederry Kenyons) to fill the respective positions.

Sadly, County Board Vice-President Michael Maher (Holycross-Ballycahill) passed away during the year and the executive committee recommended that John Costigan (JK Bracken’s), a former chairman of the County Board, succeed Michael Maher.

“I am extremely grateful to accept your invitation to become vice-chairman of the County Board,” a most obviously thrilled John Costigan said before describing it as a “huge honour”.

Mr Costigan said that the position had been “vacated by the passing of one of my boyhood idols” and that he hoped to replicate Michael Maher’s “hallmarks as an officer” which were “honesty, integrity and fair play for one and all”.

John Costigan, however, did sound a warning to the delegates at the County Convention on Sunday evening when declaring that the club fixtures programme in Tipperary was “not fit for purpose”.

“I would ask the clubs of the county going forward to closely monitor the situation,” John Costigan said before asking delegates to “put parochialism and divisionalism to one side and make the betterment of Tipperary GAA your priority”.

At the County Convention secretary Tim Floyd was roundly congratulated and commended for his outstanding report on the year that was.

“It is no more than what we expect from Tim,” out-going County Board chairman Michael Bourke revealed while Central Council representative Seán Nugent described the report as “top class”. Out-going Football Board chairman Joe Hannigan said that he wanted “to congratulate Timmy on an excellent report” before revealing that the Newport man was “a brilliant person to be dealing with”.

Ten pages of the secretary’s comprehensive report booklet is dedicated to games development in the county while other highlights include the inter-county hurling panel’s visit to Belfast earlier this year to honour the memory of Nenagh man Fr Alec Reid.

“The Tipperary senior hurlers trip to Belfast on the last weekend of January 2017 was a very memorable and significant occasion as players, team management and board officers joined with our Antrim counter parts to honour the late Fr Alec Reid,” reads Tim Floyd’s secretary’s report.

“Fr Alec played minor hurling for Tipperary and was on the All-Ireland winning team of 1949 having shone out in Nenagh CBS’ Croke Cup team of 1948. He joined the Redemptorist Order and most of his ministry was served in Clonard monastery in Belfast. He went on to become a peacemaker of extraordinary ability as he convinced the Republican Movement that an attempt at peace was worth an effort.

“The festival of hurling organised by the Antrim County Board was an outstanding success and Tipp departed for home taking with them wonderful and moving memories of Belfast and its GAA fraternity. In the true sense of Fr Alec, friendships were born and new bridges were built between the two counties. This was a tremendously rewarding weekend. The warmth and generosity of the Belfast community is one to be treasured, valued and promoted as Fr Alec would have truly wished for.

“For their part the Tipperary hurlers proved to be fantastic GAA ambassadors who carried that mantle with unassuming ease, humility and respect. They were only too happy to oblige in whatever way they could to guarantee all requests asked of them were catered for.

“The Fr Alec Reid memorial plaque presented to Tipperary County Board in Belfast was later presented to the Nenagh Eire Óg GAA Club and is now erected on the exterior wall at the entrance to their complex in Gortlandroe, Nenagh. The plaque was unveiled in July 2017 in association with the launch of Fr Alec Reid’s book.”

At the County Convention on Sunday evening it was revealed that the 2018-2020 strategic plan for Tipperary will be unveiled early in the new year - County Board development officer PJ Maher (Boherlahan-Dualla) has co-ordinated the development of the new county strategic plan alongside committee secretary Denis Floyd (Newport).

In his report to Convention County Board secretary Tim Floyd commented: “I hope the fruits of their work are acknowledged by approving the plan and launching a road map for our county until the end of 2020”.

Information technology officer Lisa Stapleton is currently working on the design of a new Tipperary GAA website which is set to be launched in 2018. And, it is interesting to note that since the Tipperary County Board launched its social media presence in 2010 the Twitter following has grown from 600 to 47,219 and the Facebook likes from 5,000 to 17,220.

Speaking on behalf of the Tipperary Supporter’s Club Seán Nugent revealed that the supporter’s club had contributed €140,000 to the preparation of the Tipperary teams in 2017 and that €75,000 of that figure came directly from the members of the club.

Mr Nugent then revealed that the Tipperary Supporter’s Club were “engaged in a major effort to raise that number” (of members). The Kilsheelan-Kilcash man indicated that a strategy had been developed to increase the membership of the Tipperary Supporter’s Club and major element to that strategy was to recruit “sellers” who would actively sell membership. Seán Nugent appealed to the delegates to the County Convention to support the initiative.

And, in response Joe Hannigan spoke on behalf of the Friends of Tipperary Football.

“We can identify strongly with the sentiments that Sean has expressed,” Joe Hannigan explained.

Ger Ryan (Templederry) represented the Munster Council at the Tipperary GAA Convention on Sunday evening in The Dome and presented a series of cheques to Premier County clubs under the provincial body’s grants scheme.

The Tipperary Association (Dublin) presented three cheques to the value of €1,000 each to three outstanding young GAA players in order to help each individual pay for their third level education - those players were: Emmet Moloney (Drom & Inch), Kevin Fahey (Clonmel Commercials) and Emma Buckley (Cahir).