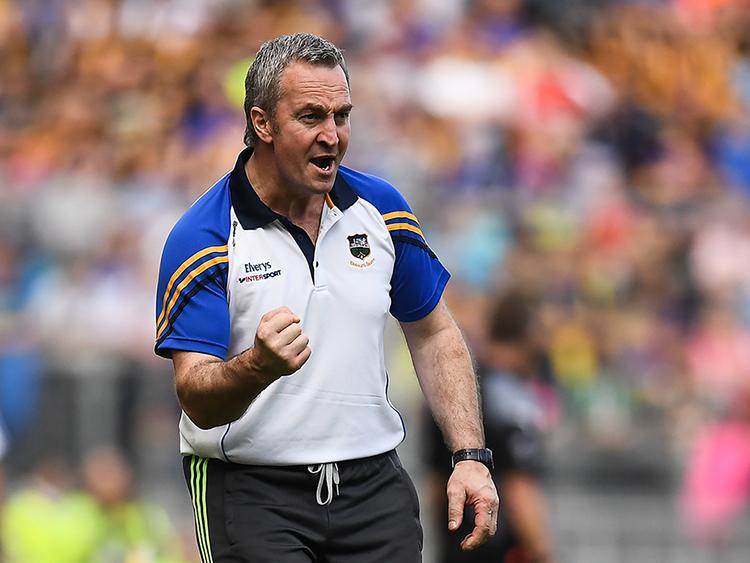 Manager Michael Ryan fielded an experimental Tipperary team in a senior hurling challenge match played against All-Ireland club semi-finalists Slaughtneil Robert Emmets (Derry) at Castleknock, Dublin on Saturday afternoon - Cathal Barrett made his return to the blue and gold jersey at midfield, Paul Maher started at centre-back and Justin Cahill made a big impact at midfield.

Tipperary did not play especially well in this 60-minute contest and trailed at the break (0-12 to 3-5) having faced the wind - the two-man Slaughtneil full-forward line was causing problems as was the positioning of Chrissy McKaigue as a deep-lying midfielder. The Premier County, however, were much improved following the interval and out-scored the Ulster club champions 1-11 to 0-3 in the second half.

Tomás Hamill was quite impressive at half-back, Paul Shanahan grafted hard in the half-forward line and although Ger Browne fired a hatful of wides the Knockavilla man looked lively and more than eager to make an impression. The star of the show, however, on this occasion was Justin Cahill at midfield. The Kilruane MacDonagh’s man, although unmarked for the majority of this contest, moved the ball around smartly and was a key influence on the second half. Another Kilruane man to make an impression was inside forward Cian Darcy who may well have finished this contest with four goals to his name while Conor Kenny was prominent in the opening half.

Points from Conor Kenny and Ger Browne helped Tipperary into a 0-2 to 0-1 lead by the fourth minute, but Slaughtneil struck for the opening goal of the game seconds later. Tipperary responded with a Justin Cahill strike and although Slaughtneil hit back soon after an effort from Cian Darcy left one in it (0-4 to 1-2) with seven minutes played.

In the 13th minute Paul Shanahan created a goal-scoring opportunity for Cian Darcy, but the Kilruane man was denied by a superb save from the Slaughtneil ‘keeper. Jason Forde drilled over the resultant ’65 and although the Derry men edged back into a narrow lead, points from Jason Forde (free), Paul Shanahan and Conor Kenny helped Tipperary toward a healthy advantage before another good save denied Cian Darcy in the 17th minute.

Following strikes from Jason Forde and Conor Kenny (his third of the opening half) Tipperary led 0-10 to 1-3, but then coughed up 2-2 during a nine-minute spell. Both goals were similar - smart deliveries from the middle third of the field picked out the inside-to-out runs of the two-man full-forward line and the ball was off-loaded to runners streaking through.

Paul Shanahan and Jason Forde (free) had the final say in the first half scoring from a Tipperary point of view (0-12 to 3-5).

Tipperary were dominant after the interval. Indeed, Slaughtneil did not score for the opening twenty-four minutes of the second half.

A Cian Darcy effort set Tipperary on their way before two consecutive Jason Forde frees edged Michael Ryan’s men into a 0-15 to 3-5 lead by the 35th minute.

A Ger Browne brace opened a three-point gap between the sides before Cian Darcy enjoyed a slight sniff of goal in the 43rd minute, but settled for a point.

Next it was the turn of Jason Forde to land a very classy effort off his left and Tipperary’s dominance was rewarded with a goal in the 50th minute when Forde picked out Patrick Maher with a smartly-taken free and the Lorrha man buried a right-handed effort.

Three minutes later Patrick Maher created an opportunity for Cian Darcy, but the Slaughtneil ‘keeper conjured another exceptional save to deflect the Kilruane man’s effort over the bar.

Slaughtneil landed three points between the 54th and 59th minutes while Noel McGrath stroked over a free with five minutes to play. Jason Forde converted another placed ball on the hour mark, but Justin Cahill illustrated his quality (and potential) in the 58th minute when creating the score of the game - the Kilruane man collected a short pass from Paul Maher on the left flank and pinged a smashing diagonal ball into the hand of Noel McGrath at right corner-forward. The Loughmore-Castleiney man did the needful and landed a lovely score.