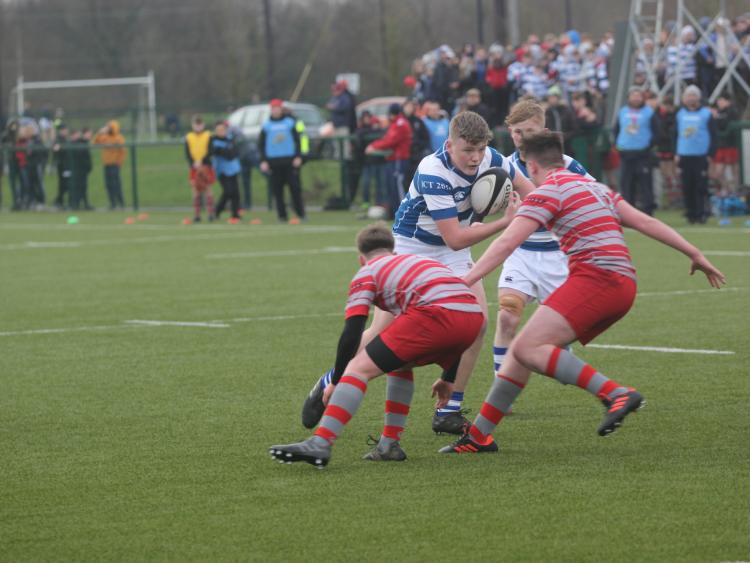 Rockwell College got off to an encouraging start in the Munster Junior Cup on Wednesday when the Tipperary outfit beat Glenstal Abbey 24-0 in the first round.

This match was played on the University of Limerick all-weather pitch because of the inclement weather which prevailed during the preceding week.

Truly this was a combined team effort from one to fifteen which saw a free-moving Rockwell side advance to the quarter-finals.

Rockwell started against a much bigger Glenstal outfit. However, a wonderful try finished by scrum half Adam Maher allowed them to settle into the game.

Rockwell were forced to defend resolutely for the next ten minutes as both teams sized each other up while on their own 22 a fantastic kick chase by Adam Buttimer forced a turnover with the ball going wide to Michael Mulligan to touch down for Rockwell’s second try. Rory Collins duly converted to leave Rockwell 12-0 up.

Rockwell were now on the front foot and moving the ball well around the field.

Adam Buttimer took advantage of a Glenstal sin-binning to score in the corner. The difficult conversion from the sideline was then neatly converted, once again, by Rory Collins to leave Rockwell 19-0 ahead at half-time.

Glenstal upped the ante in the second period and when Adam Buttimer was yellow carded on 12 minutes Rockwell stood firm in the face of the Glenstal onslaught and held them scoreless.

Rockwell’s bench made an impact and they finished the game with Jack Heffernan scoring the final try.

Rockwell know they have a lot to do to progress further, but this was an unheralded team, ably coached by Danny Lambe, that combined well to keep the ball wide and stretched Glenstal throughout. This was very much a team performance, but Adam Buttimer, Sam Tarleton and Adam Maher at scrum half caught the eye.