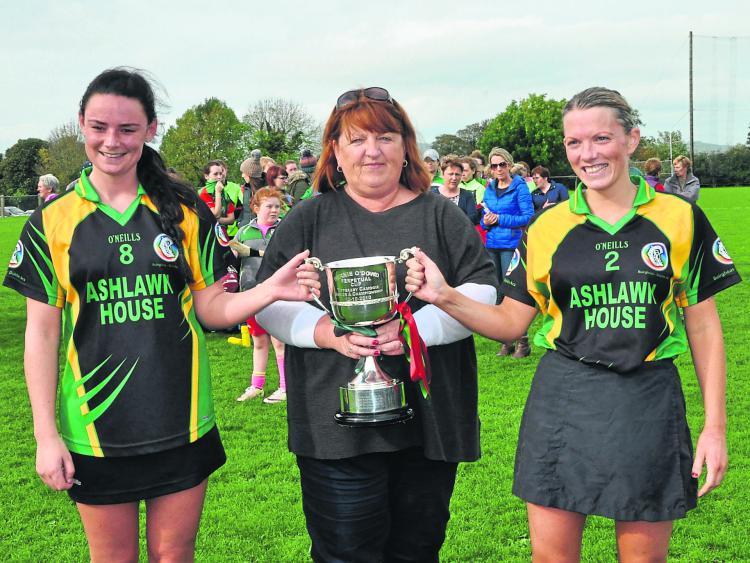 Burgess-Duharra’s All-Ireland dream ended in heartache at Banagher on Sunday afternoon when the Tipperary champions lost out to Sarsfields (Galway) in a hard-fought semi-final by a single point.

Burgess-Duharra played into a stiff breeze in the first half and appeared to have earned a significant foothold in the contest when retiring at the interval all square (0-5 apiece). To their credit, however, Sarsfields battled gamely in the second half and defended superbly with Niamh McGrath representing an absolute colossus alongside centre-back Clodagh McGrath.

The fact that referee Eamon Cassidy deemed it necessary to award an extraordinary forty-eight frees (Burgess-Duharra 23, Sarsfields 25) illustrates the brand of physical contest that supporters were exposed to on Sunday. And, ultimately Sarsfields proved themselves the more physically-robust side. Indeed, Burgess-Duharra did not conjure their first shot at the posts until the 45th minute and their opening point from play until the 59th.

That said the aftermath of this contest may be tinged with regret for Burgess-Duharra - the Tipperary champions rarely hurled with the fluency that we have come to associate with the side and also saw a second half penalty brilliantly saved by Sarsfields ‘keeper Yvonne Lyons.

No point from play was scored in the opening half as a ferocious physical contest developed - the game also featured an extraordinary number of rucks.

Two Niamh McGrath frees presented Sarsfields with a 0-2 to no-score lead before Burgess-Duharra converted five placed balls, all courtesy of Jenny Grace, between the sixth and 14th minutes to take a 0-5 to 0-2 lead.

At this juncture Burgess-Duharra looked comfortable at the back and Amy Kennedy was playing well at centre-forward while Tara Kennedy and Eimear McDonnell were being fouled on a regular basis.

Sarsfields, however, steadied themselves nicely - a Niamh McGrath free in the 21st minute brought eighteen scoreless minutes to a conclusion for the Galway champions before further frees from Siobhán McGrath and Niamh McGrath tied the game at the break (0-5 apiece).

Ironically enough playing against the breeze seemed to suit Sarsfields that bit better in the second half with the lively Siobhán McGrath threatening to spark attacks of real significance on a regular basis. Meanwhile at the other end of the field the Burgess-Duharra forwards were crowded out.

A Jenny Grace free re-claimed the lead for Burgess-Duharra in the 32nd minute before Siobhán McGrath notched the first score from play of the game to tie it up. Soon after Eimear McDonnel was hauled down for a free which Grace converted, but within two minutes Siobhán McGrath (free) had her side back on terms (0-7 each). McGrath then conjured the score of the game in the 44th minute when seeing off the attention of two Burgess-Duharra defenders to present Sarsfields with a priceless lead entering the final quarter.

This contest arrived at a critical juncture in the 46th minute when Eimear McDonnell was hauled down for a penalty - Jenny Grace took responsibility for the placed ball and although the midfielder thundered in a rasping shot Sarsfields ‘keeper Yvonne Lyons saved brilliantly. The Galway champions cleared their lines and less than two minutes later Rachel Murray set up Siobhán McGrath for an eye-catching score. Now Sarsfields led by a very significant two (0-7 to 0-9).

The Tipperary champions scored their first point from play in the 59th minute when Aisling Cremin and Laura Reid combined before Tara Kennedy flashed over a lovely score to cut the deficit to one. Seconds later Amy Kennedy’s ambitious shot dropped short and Sarsfields counter-attacked sharply - this time Siobhán McGrath set up Rachel Murray for a tenth point.

Burgess-Duharra now trailed by two and although Ciardha Maher drilled over a fine individual score in the 61st minute the Tipperary champions were denied an opportunity to craft an equaliser since referee Eamon Cassidy elected to play just ninety seconds of injury time.