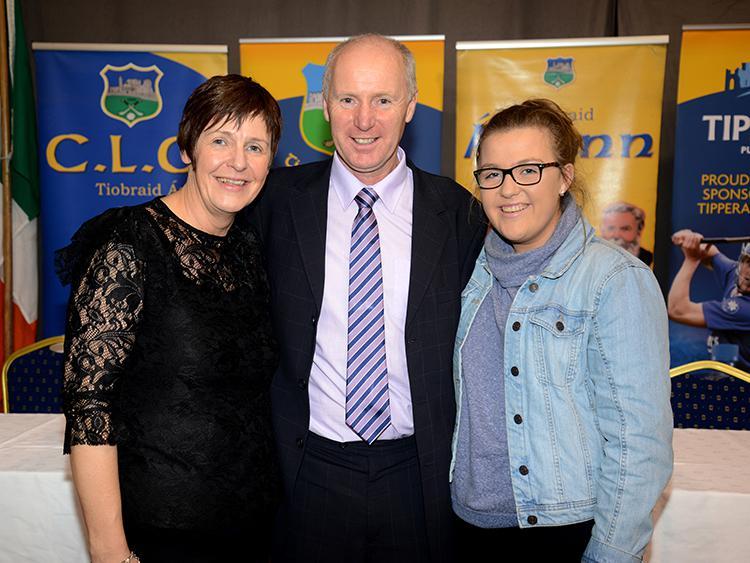 County Board vice-chairman Joe Kennedy pictured with his wife Maureen and daughter Marie at the County Convention. Photo: Eamonn McGee

The 2018 fixtures plan for the respective football and hurling competitions was ratified by club delegates at the January meeting of the County Board in the Sarsfields Centre, Thurles on Tuesday, January 30th - County Board vice-chairman Joe Kennedy, however, did warn delegates that fixtures would be brought forward depending on the progress of the Tipperary inter-county teams.

As matters stand the ratified club fixtures programme is jam-packed - the programme sensibly allows for the possibility of the Tipperary inter-county hurling team progressing to the All-Ireland final. So, the natural knock-on effect is that a whole series of club championship games are scheduled to take place in April and early May while the club championships will not then resume until September. However, should the Tipperary inter-county hurling and football teams find themselves knocked out of their respective championships at an early stage the County Competitions Control Committee (CCCC), which is chaired by Joe Kennedy, plan to bring the games schedule forward.

Right now, for example, due to the packed schedule of games the county intermediate hurling and football championship finals are fixed for Wednesday, October 17th.

“Games will begin sooner if Tipperary don’t reach the All-Ireland final,” warned CCCC chairman and County Board vice-chairman Joe Kennedy before explaining that depending on the progress of the inter-county football and hurling teams the club championships could resume as early as the third week in July (week-ending July 22nd); that eventuality, of course, would only materialise should the Tipperary senior hurlers and footballers endure a disastrous campaign.

“We have no great desire to play the intermediate county finals on a Wednesday night,” Joe Kennedy explained.

“So, if we get a chance to avoid that eventuality then we will do it,” the County Board vice-chairman added.

The divisional senior hurling championships have been afforded the following dates in the ratified plan: the weeks-ending April 1st, April 22nd, April 29th and May 6th. All divisional championships are scheduled to be completed by the week-ending Sunday, May 6th.

The rounds of the Séamus Ó Riain Cup will also be played on the aforementioned weekends for the Roinn I games.

At the January meeting of the County Board County Competitions Control Committee (CCCC) chairman Joe Kennedy explained that the draw for the Tipperary Water County Intermediate Football Championship will take place on Monday, February 5th. On that day the draw for the groups in the 2018 county senior hurling and football leagues will also be made.

Mr Kennedy also revealed that the CCCC had encountered a “slight problem” with regard to the make-up of the county senior hurling and football leagues - given the success of the 2017 leagues a further nine teams (seven hurling and two football) had been entered in the 2018 leagues. The additional teams and their respective impacts on the make-up of the leagues placed the competition organisers in a bit of a quandary.

Joe Kennedy outlined the implications of the matter and opened the issue up to the floor.

In response delegates agreed to let the CCCC adjudicate on the matter and decide upon the most practical approach to adopt with regard to the make-up of the competition.

“I trust the CCC to find a workable solution,” County Board chairman John Devane said before explaining that it was a compliment to the competition to see so many clubs wanting to enter additional teams in the league.

Speaking with relation to the fixtures schedule in general and with relation to pitch facilities in particular Tom Maher, the secretary of the County Competitions Control Committee (CCCC), insisted that an all-weather pitch was “needed three years ago and it is absolutely essential now”.

Mr Maher argued that the issue needed to be “taken by the horns” and encouraged the County Board to set up a committee. Tom Maher said that “four or five sand-based pitches” should be installed and “spread out around the county” to cater for the fixtures programme along with “one or two” 4G pitches.

“We need them now and a feasibility plan needs to be drawn up as soon as possible,” Tom Maher said.

In response County Board chairman John Devane revealed that there was already “strong work done” with relation to the matter.