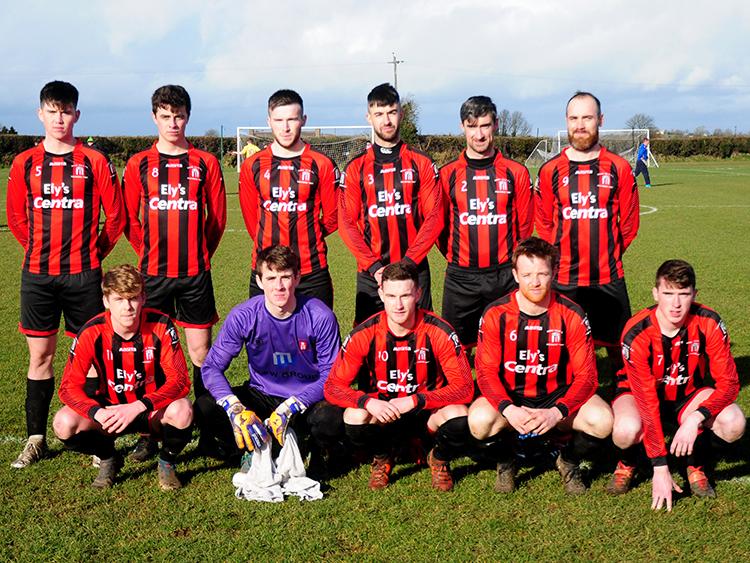 Peake Villa are through to the quarter-finals of the Munster Junior Cup following a 3-2 win over rivals Thurles Town - this cracking cup tie ended two-all after normal time before a Michael Wade penalty propelled the home side into the last eight of the prestigious competition.

Following a terrific contest, which featured plenty of meaty challenges and quality football, Peake Villa edged it thanks to a decision in the 103rd minute to award the home side a penalty - Stephen Carroll turned over the ball inside the Thurles Town half and played Dale Loughnane through on goal. With Graeme Loughman’s goal at his mercy Loughnane looked certain to score, but was fouled. Subsequently Steven Coppinger was shown a straight red card and although Thurles Town vehemently contested the decision Michael Wade lashed his penalty into the right hand corner. Indeed, Thurles Town felt so aggrieved with the penalty decision that their side was reduced to nine men when Derek Loughnane picked up a second yellow card for dissent.

Full credit, however, goes to both sides who gave this contest their absolute all in freezing cold conditions at Loughtagalla, Thurles on Sunday afternoon. Indeed, the opening half came to a conclusion in driving snow. But each and every player made light of the conditions and stood tall in a very entertaining game.

Thurles Town took the lead in the second minute - Villa ‘keeper William Tierney punched a Michael Byrne delivery, but only as far as Martin Darmody who cleverly looped his header into an unguarded net.

Peake Villa responded superbly to the situation they found themselves in and with Jody Harkin outstanding in the middle of the field the home side almost conjured an equaliser as early as the seventh minute - Harkin sparked a move which saw Thomas Teer scoot in only for the winger to be ruled, strangely, offside.

Four minutes later, however, Peake Villa struck for an equaliser when Harkin floated an absolute beauty of a ball in behind the Thurles Town defence; Michael Wade raced through and delivered a cool finish (1-1) in the 11th minute.

Three minutes later Stephen Carroll saw his free kick saved by Graeme Loughman and it really looked as if Peake Villa had established themselves as the dominant force in this contest when, in the 19th minute, the home side conjured another chance. This time Jody Harkin moved the ball right and Stephen Carroll picked out Anthony Walker, but the midfielder lifted his shot over the bar.

Thurles Town, however, steadied themselves and when Noel Byrne’s side switched to a 4-4-2 the North Tipperary & District League champions coped with the challenge posed by Peake Villa much more comfortably. Indeed, in the 21st minute Paul Kirwan looked set to score only for Alan Leahy to dispossess Kirwan with a superb last-ditch tackle.

The sides then traded opportunities - Graeme Loughman did especially well to push James O’Sullivan’s effort out for a corner in the 29th minute while Aidan Keenan’s header following a Derek Loughnane cross in the 37th minute drifted just wide.

On the balance of play Peake Villa looked the more accomplished side in the opening half and took the lead in the 39th minute - although Stephen Carroll’s shot was initially saved the ball broke to Thomas Teer who also saw his shot blocked, but when the ball broke to Teer once more he made no mistake with a left-footed finish from close range (2-1).

Aidan Keenan almost conjured an equaliser in the 63rd minute when three Thurles Town attackers struggled to get a touch to the midfielders teasing delivery from the left and three minutes later Peake Villa were also left cursing their misfortune when Graeme Loughman saved brilliantly at the feet of the raiding James O’Sullivan. Seconds later O’Sullivan turned provider and although his cross found the head of Anthony Walker the midfielder steered his effort narrowly wide.

A long-range effort from Adrian Cleere whistled just wide with fourteen minutes to play before Graeme Loughman pulled off another excellent save to deny Thomas Teer in the 79th minute.

Then an extraordinary moment materialised in the 81st minute - James O’Sullivan, with a terrific piece of skill, sprung the Thurles Town offside trap and sent Thomas Teer away down the left. And, Teer, in turn, picked out Jody Harkin who fired in a rasping shot only for Graeme Loughman to pull off a brilliant save.

And, if you thought no moment of this contest could top that we were very wrong - in the 87th minute Conor English took off down the right flank, turned his man and then curled a sensational left footed shot into the top left-hand corner; a spectacular equaliser (2-2).

With both sides, understandably, tiring the opening half of extra-time proved reasonably uneventful, but a Joe Moloney effort in the first minute of the second half was bravely blocked by Greg Culley. And, then just two minutes later Peake Villa were awarded the match-winning penalty which Michael Wade converted.

In the previous round of the competition Peake Villa saw off the challenge of Nenagh Celtic in extra-time (2-1) and in the quarter-finals have been drawn away to Janesboro or Pearse Celtic - the quarter-finals are scheduled to take place on Sunday, March 11th.

Two other Tipperary league clubs remain in the competition - St Michael’s were fixed to host Murroe on Sunday while Cahir Park had also been drawn at home to Southend United, but both games were called off.

Cahir Park, a surprise packet in this year's competition, have beaten Cullen Lattin (4-0), Vee Rovers (1-0) and Cashel Town (on penalties) during the earlier rounds of the competition before seeing off Avondale United (2-1). Meanwhile St Michael's comfortably accounted for Waterford side St Saviour's in the last round when winning 4-0 and thereby progressed to the last sixteen in the competition for the fifth successive season.

In the first round Peake Villa beat Galbally United (5-0) and then saw off the challenge of Kilmanahan United (6-0) before accounting for Clonmel Town (2-1) in the third round. 2017 cup finalists St Michael's have also accounted for St Nicholas (3-0), Clonmel Celtic (1-0) and Donohill & District (7-0). 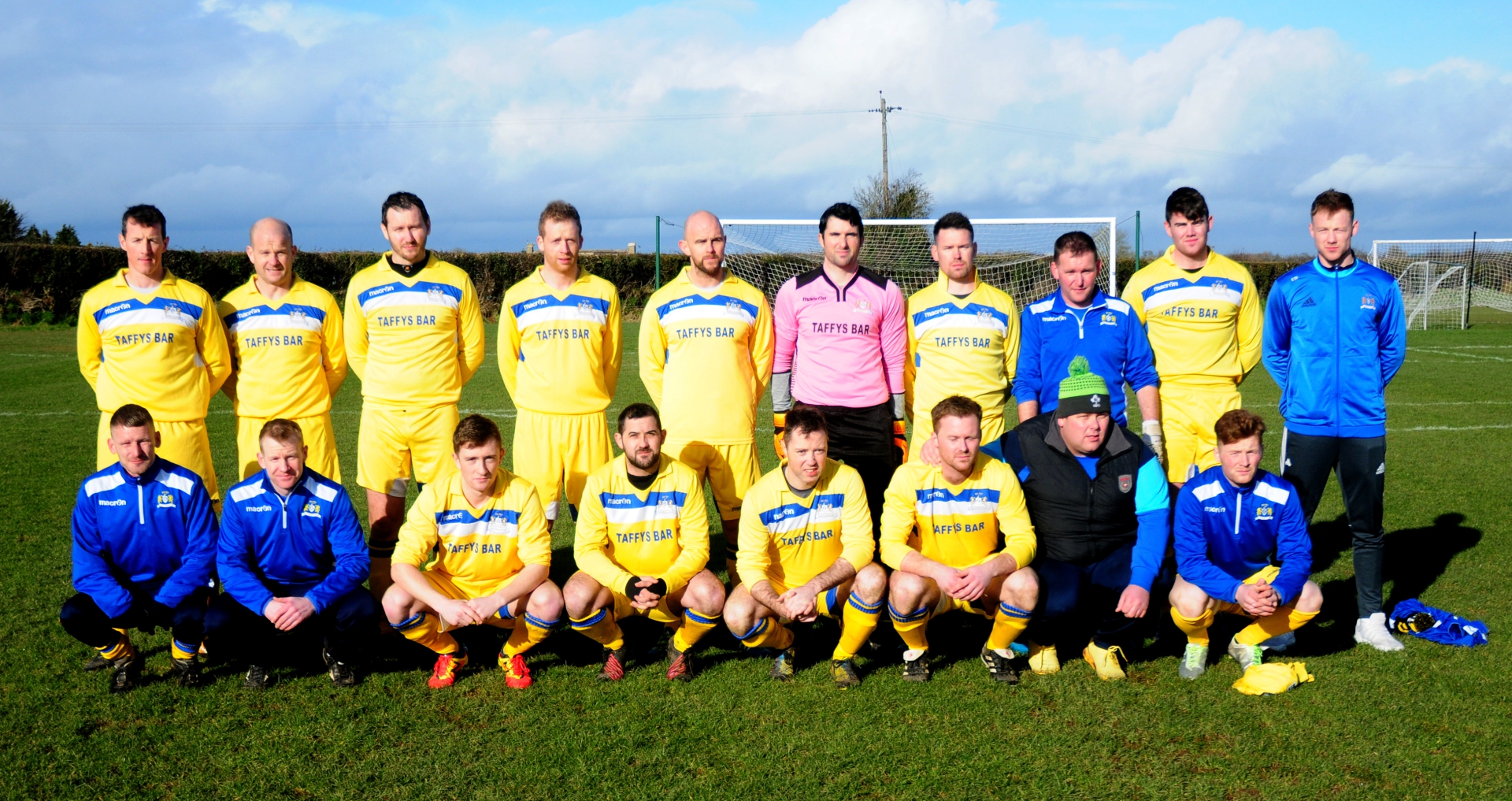 The Thurles Town squad of players which lost out (2-3) to Peake Villa on Sunday afternoon.