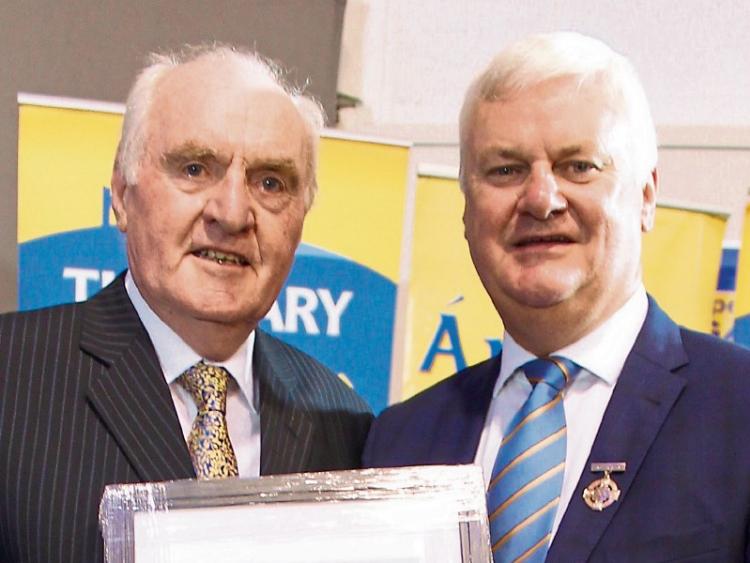 Seamus King (left) with GAA President Aogán Ó'Fearghail, who presented him with a President's Award at a banquet in Croke Park on Friday evening.

Seamus King from Cashel was one of twelve winners of the GAA President's Awards, which were presented at a ceremony in Croke Park on Friday evening.

These prestigious annual awards, organised with the support of club championship sponsors AIB and broadcast by TG4 on its YouTube channel, afford the GAA president an opportunity to acknowledge outstanding commitment and long service across the club and county network.

The citation for his award stated that "Seamus King is a name synonymous with GAA excellence. He was a renowned club administrator and was the chairman of his beloved Cashel King Cormacs from 1985 to 1992 – a period which saw the Tipperary club enjoy magnificent success that included a county senior crown and a Munster club championship in 1991.

"Off the field, Seamus King has given extraordinary service to the GAA in the work he has done producing historical books and record books that have preserved the heritage of our games for future generations, and is an exemplary figure in this regard.

"A former winner of the prestigious GAA MacNamee award in 1993 for his journalism, he now receives further recognition for his lifetime of service".

GAA president Aogán Ó Fearghail said “this event is one of the highlights in the diary of an Uachtarán because it is a special opportunity to shine a light on some of the outstanding people whose selfless dedication to our games has made our Association the thriving entity that it is today.

“The GAA is at its best when it sees people come together to work towards a goal, and all of those who are gathered here tonight for awards deserve special tribute for the inspirational work they have done".