Tipperary manager Michael Ryan: “There are no surprises here - the Davy factor is real. He has a huge amount of passion and a huge amount of organizational ability and a real eye for the game".

Tipperary senior hurling manager Michael Ryan admires the outstanding job that his counterpart David Fitzgerald has done and is doing in Wexford - the Model County, who lead division 1A of the Allianz National Hurling League, pay a visit to Semple Stadium, Thurles on Saturday, February 17th (throw-in 7pm).

As a manager Michael Ryan, in both his professional and sporting life, has seen it all. So, when the Tipperary senior hurling manager steers your attention towards something he feels is of significance you pay attention; that is if you have any sense.

The anecdotes, of course, flock around former Clare hurler David Fitzgerald, but that’s just a caricature created by, perhaps, a combination of the media and some gentle massaging by the Sixmilebridge man himself.

Michael Ryan, however, is not fooled. He has examined the evidence and realizes that the success enjoyed by Davy Fitzgerald in Waterford, Clare and now Wexford is no accident. Fitzgerald has no void left to fill on his record and Michael Ryan, certainly, admires a piece of managerial work well done.

“Absolutely and, to be fair, he has done it everywhere he went,” Michael Ryan said.

“There are no surprises here - the Davy factor is real. He has a huge amount of passion and a huge amount of organizational ability and a real eye for the game. And, to be fair to Davy he is box office himself. He will provide a huge amount of entertainment on every level - both on the field, on the sideline and in the interviews.

“I would say he is one of the most colourful characters that we have in GAA management at this point in time and he hasn’t disappointed anybody yet,” Michael Ryan told the Tipperary Star this week.

The Tipperary senior hurling manager was also eager to point out that it is far from simple to grab a bunch of people and transform how that very group perceive themselves. Indeed, Michael Ryan argues that David Fitzgerald may well have transformed Wexford’s self-image for some time to come.

“It should never be underestimated, genuinely,” Michael Ryan explained.

“What Davy is able to bring is an incredible bounce. Plenty have tried, but very few have brought that level of change in such a quick time. You can look through the list and the list is long in terms of the various managers who have gone to various counties and tried to do it - Davy certainly did it with Waterford, did it with Clare and he is certainly getting it done again with Wexford. At times, I think, we don’t give Davy enough credit for what he is actually doing,” the Upperchurch-Drombane man added.

And, the skill involved here concerns itself with something more significant than hurling alone.

“I agree,” Michael Ryan said, “whatever impact that Davy will have on these players while they are under his guidance and they achieve whatever they will achieve on the hurling field he will have succeeded in changing the whole mind-set (in Wexford).

“How long will that last? Well, that’s up to the players themselves, but they will certainly have seen that anything can change with the proper structures in place and the proper management. Their whole belief systems will never be the same again post-Davy.”

Wexford are certain to present Tipperary with a stern test on Saturday - there is no doubting the fact that this Wexford team represents real trouble.

Given their form the side managed by David Fitzgerald has prioritized making a significant impression on the division this season and will arrive at Semple Stadium on Saturday full of confidence.

The Wexford hurlers, for example, have now beaten Kilkenny in three successive contests - in the quarter-finals of the Allianz National Hurling League last season they saw off the challenge of Brian Cody's men (2-18 to 0-19) and also beat them in a Leinster semi-final last summer (1-20 to 3-11). Then, most recently, Wexford collected the Walsh Cup at Kilkenny's expense - that contest finished in a draw (1-24 apiece), but Mark Fanning fired over the winning 65-yard free following a shoot-out.

Wexford did lose the 2017 Leinster final to Galway (1-17 to 0-29) and a subsequent All-Ireland quarter-final to Waterford (1-19 to 1-23), but there is no doubting the fact that this Wexford hurling team is on the rise. Indeed, David Fitzgerald's team got off to an impressive start in this year's league campaign when beating Waterford (2-20 to 0-19) and Cork (0-21 to 1-14). David Dunne plundered both goals against Waterford while Lee Chin is in sensational form. Watch out for goalkeeper Mark Fanning who manages the game expertly for Wexford while Paudie Foley, Matthew O’Hanlon, Kevin Foley, Aidan Nolan, Jack O'Connor, Diarmuid O’Keeffe and Jack Guiney are in terrific form. And, Wexford, of course, will also feature Oulart-The-Ballagh's Shaun Murphy as sweeper.

So, on Saturday Tipperary are likely to get hit with a double whammy - a highly-motivated Wexford team and a side who are eager to impose a non-traditional structure on the contest.

“Absolutely, it (the challenge) is two-fold,” agreed Michael Ryan.

“The Davy (Fitzgerald) impact is that you can almost feel it (the passion) coming out of the television when you are watching the highlights - these guys have their tails up and they seem to be really enjoying their hurling. Davy has brought a really good focus to Wexford. So, look he is going to bring a really good challenge.

“From what I saw in the game against Cork they really, really worked hard. And, I think they are building their brand upon a type of game plan that suits them along with huge intensity and a lot of physicality. They are big, strong and athletic guys. So, it is a great test. And, you are going in against one of the two unbeaten teams (in the division) and, while acknowledging that it is only February, there is a little gauntlet being thrown down here,” Michael Ryan said.

“I think our guys have to take that on because it is a different type of game - when we play Kilkenny and Cork they will be different types of games with different questions being asked, but this is Wexford. I think for everybody it will be an enjoyable game,” the Upperchurch-Drombane man added. 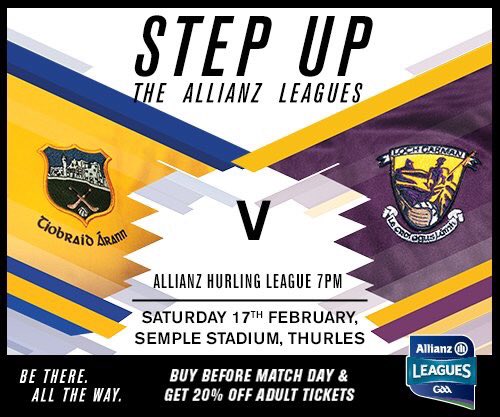 The sides last encountered one another in the semi-finals of the 2017 Allianz National Hurling League when Tipperary won (5-18 to 1-19) at Nowlan Park, Kilkenny. Noel McGrath (two), John McGrath (two) and Brendan Maher notched the goals for the Premier County and although Tipperary won with eleven points to spare Wexford were right in the contest for long stages. Indeed, between the 60th and 66th minutes Tipperary fired 2-4 without reply to seal their place in the league final. And, the prevailing pattern of that contest was not and is not lost on Tipperary manager Michael Ryan.

“We met last year in the league semi-final and really and truly anyone who was down in Kilkenny that day knows that game was there in the melting pot before we hit a little bit of a purple patch over the last seven or eight minutes and tagged on the important scores. But it was a real match and it was a real match for a very long time. So, we would be expecting no different this time - they are unbeaten so the challenge is ours,” Michael Ryan explained.

Last year's semi-final was played in a sporting manner exception for one incident when Wexford manager David Fitzgerald entered the field of play in order to remonstrate with referee Diarmuid Kirwan (Cork) following a contentious incident involving James Breen during the build-up to a Noel McGrath goal in the 18th minute.

The sequence featured an exchange between Fitzgerald and Tipperary player Jason Forde. And, unfortunately the incident subsequently led to the talented Silvermines man collecting a suspension - Jason Forde missed out on the Munster championship first round clash with Cork as a result.

Subsequent to Tipperary's experience in 2017 County Board secretary Tim Floyd (Newport) submitted a motion to GAA congress with specific relation to the matter. The motion is one of forty-two which have been formally accepted on the clár for the 2018 Congress which takes place later this month (February 23rd-24th).

In 2017 Tim Floyd and the Tipperary County Board contested Jason Forde's suspension to the very best of their ability and although Forde was forced to serve his suspension in the end the Premier County are now seeking to define a melee in the rule book.

Jason Forde was found guilty of “contributing to a melee” when the incident, essentially, involved one other person, namely Wexford manager Davy Fitzgerald. If Tim Floyd's motion to congress is successful “a melee shall be defined as a minimum of five persons”.

As has been the recurring pattern in the league this season Tipperary are expected to field a reasonably experimental team on Saturday at Semple Stadium, Thurles.

“Yeah, it's an interesting one,” Michael Ryan admitted.

“We would hope that most of the panel will have seen game time before the five rounds of the league have been played. And, we will be doing something similar on Saturday night in that there will be an element of rotation because we simply have to look at guys. But we are conscious that this is a very strong and mobile Wexford team. We will look at them in a slightly different way to what way we might look at Kilkenny or Cork. And, at the end of the day we want to pick up the points here too. We are at home and the points are there to be won,” the Tipperary senior hurling manager added.

Michael Ryan, however, has been heartened by the dedication of his players to training and was eager this week to highlight the players’ “top class” attitude.

“What I can tell you is that the competition within the group (of players) is fierce; it is absolutely fierce. We had a really good week since we played Waterford in terms of work and the training sessions really ticked a box for us. We came away really, really happy with the lads’ attitude to it and with their application in training - in was top class. I could not praise them enough,” Michael Ryan explained.