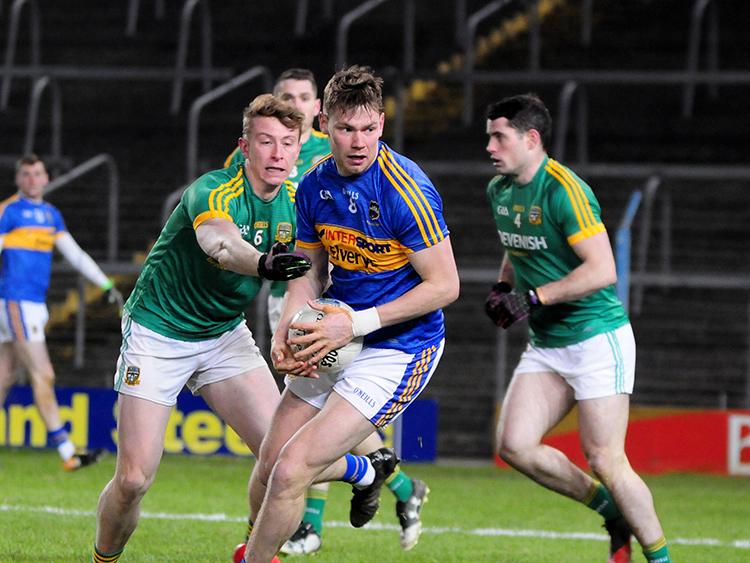 Liam Casey was in terrific form for Tipperary against Meath. Photo: Eamonn McGee

The Tipperary footballers have collected five points from four games in division two of the Allianz National Football League. And, although the Premier County could, potentially, force themselves into the promotion picture manager Liam Kearns is refusing to even consider promotion. Tipperary’s focus is trained on one thing: consolidating the team’s position in division two.

“We are not going to consider or even think about division one until we have done what we need to do in division two,” a resolute Liam Kearns explained following Tipperary’s eight-point (2-15 to 1-10) win over Meath at Semple Stadium, Thurles on Saturday night - to read the Tipperary Star’s report on the game please click here.

Next up for the Tipperary footballers is a meeting with Louth at Semple Stadium, Thurles on Sunday, March 4th (throw-in 12.30pm) - Liam Kearns’ men will share the stage on that occasion with Michael Ryan’s hurlers who host Cork at 2.30pm.

Following that double header Tipperary are away to Down in Páirc Esler, Newry on Sunday, March 18th while on Sunday, March 25th Cavan will welcome the Premier County to Breffni Park, Cavan.

The division two league final is scheduled to take place on Sunday, April 1st at Croke Park, Dublin while Tipp will face Waterford in a Munster Senior Football Championship quarter-final on May 19th - the winner of that clash will face Cork on June 2nd while the Munster final is fixed for June 23rd.

And, the forthcoming clash with Louth presents the Premier County’s footballers with an opportunity to secure their place in the division with two rounds to play.

“If we win that we will have consolidated our position in division two with two games to go and that’s what we set out to do. So, that’s another big game for us. Louth came here last year and beat us when promotion was on the line - (Louth) kicked our arses by four or five points. We know it will be another tough game - there are no easy games in this division and that is the reality of it. We have just got to keep going until we have consolidated our position in the division,” Liam Kearns explained on Saturday night before the Kerry man revealed that he was not happy with his team’s home form.

“We are not happy with our home form - that pitch should suit us. All of the big pitches suit us, but why we are not winning in Thurles is beyond me. I felt very sorry for the players against Roscommon because they played and did enough to win - the performance was good enough. They have learned the lesson and if you are learning lessons you can only improve. But I am delighted that we have won a game against serious opposition in Thurles.

“We have not won back-to-back games in Thurles in the three years that I have been here. So, we will certainly be doing our utmost to back this performance up next Sunday,” Liam Kearns added.

Although Tipperary’s trip to Cusack Park, Ennis in the third round of the league yielded a share of the points the performance left a lot to be desired.

“We were very, very disappointed with our performance against Clare - all of us. I take a lot of the blame for that because, obviously, I did not have their mind-set right for that game,” admitted Liam Kearns.

“We came out (of Ennis) with a point that we did not deserve, but we played really well against Roscommon - we got mugged and lost two points. It’s swings and roundabouts, but I am happy with that performance (against Meath). Overall we have been performing well and I think we deserved to win the game tonight. We got our two points so we are happy with that,” Liam Kearns explained before adding “I take the blame for the performance against Clare - in reality the manager has to have the team ready to play. In the Clare game we just didn’t perform”.

The entire Tipperary camp was eager to make a real statement against Meath - a statement which was emphatically made at Semple Stadium on Saturday evening.

“I would have to say that Meath caused us a few problems in the first twenty minutes, but once we got to grips with what they were about we looked like we were going to win the game.

“I thought Liam Casey had a great game in the middle of the field. Steven O’Brien, certainly, had a good game, but I thought the two midfielders were very good,” Liam Kearns said.

“I thought Robbie Kiely and Brian Fox were excellent also and Alan Campbell - if there is a better defender in the country than Alan Campbell then I haven’t seen him. I thought it was a good all-round performance by the team. You don’t want to go picking out individuals. I suppose all the plaudits will go to players like Michael Quinlivan and Conor Sweeney, but I thought there were an awful lot of players outside of them that stood up tonight,” the Tipperary senior football manager explained.

“I was delighted with John Meagher - he is only settling in now. I thought he had a great game tonight and I am delighted for him,” Liam Kearns added.