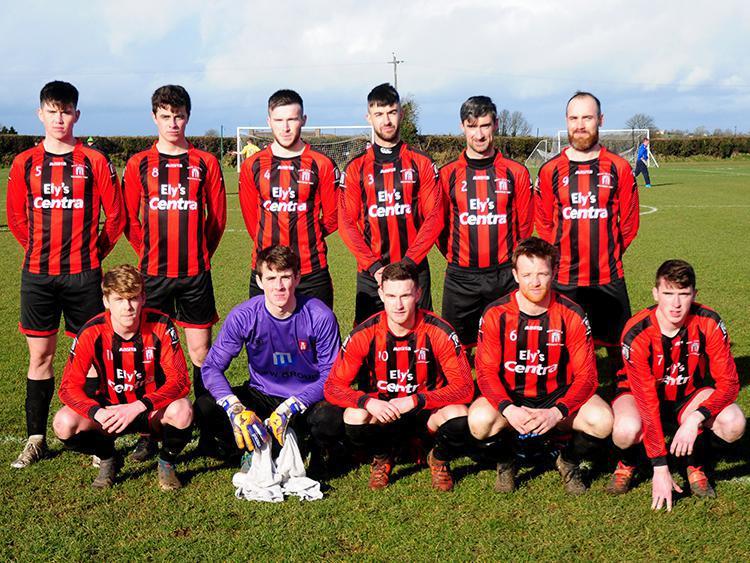 The Peake Villa team which beat Thurles Town in the last sixteen of the Munster Junior Cup.

Peake Villa lost one-nil to an excellent Janesboro team at Roxboro on Sunday afternoon, but the Thurles side departed Limerick with their pride intact. Villa were outstanding in a thrilling cup tie against the defending Limerick District League Premier Division champions and, you suspect, that player-manager James O’Sullivan is building something really special at the Tower Grounds. Indeed, the ‘Boro were reasonably fortunate to win this contest with a scrambled Aaron Nunan strike in the 46th minute deciding this quarter-final.

In the last sixteen of the prestigious provincial competition Peake Villa beat local rivals Thurles Town 3-2 (aet) and in the previous round saw off the challenge of Nenagh Celtic (2-1 aet), but this trip to Limerick to face an excellent Janesboro team was always going to test the resources of Peake Villa. But the one thing that Villa can take from this quarter-final is a realisation that the side managed by James O’Sullivan is capable of living with and beating the very best junior sides in the country.

Janesboro started well and dominated in terms of territory, but with Anthony Walker and Seán Wade getting in some meaty challenges you suspected that Peake Villa were really up for this quarter-final. Indeed, Alan Leahy and Greg Cully were also excellent at the back for the Thurles side while James O’Sullivan and Pippy Carroll also had outstanding games.

Villa could well have been awarded a penalty as early as the fourth minute when Daniel O’Neill deflected a Thomas Teer cross out for a corner - it appeared as if O’Neill had blocked the ball with his hand, but the Peake Villa appeals for a spot kick were waved away.

Another contentious decision in the 25th minute denied Peake Villa the opening goal - James O’Sullivan dispossessed ‘Boro ‘keeper John Mulready and curled home a delicious shot from a tight angle, but the referee ruled out the strike when indicating that the player-manager was offside. It is worth noting that Peake Villa vociferously contested the interpretation of the ruling.

This contest was, by now, developing into a high quality game and Janesboro created their first goal-scoring opportunity of note in the 28th minute when Niall Hanley connected with Daniel O’Neill’s cross, but Villa ‘keeper William Tierney saved smartly.

Peake Villa did especially well in the opening half and came agonisingly close to opening the scoring in the 42nd minute when Jody Harkin launched a lightning-fast counter-attack. Harkin found Pippy Carroll who, in turn, picked out Anthony Walker. The impressive midfielder then found James O’Sullivan with a brilliant diagonal delivery and ‘Boro ‘keeper John Mulready saved superbly.

Considering the effort that Peake Villa had made to establish themselves in this contest it was cruel to see the Thurles side fall behind immediately after the break when the defence failed to deal with a harmless-looking cross and Aaron Nunan scooted in to present the home side with the lead.

Peake Villa lost their way during the ensuing minutes and were thankful in the 48th when William Tierney conjured a terrific save to push Shane Clarke’s point-blank effort onto the post following Keith Mawdsley’s smart cut back.

Villa settled back down to their task soon after, however, and created a goal-scoring opportunity of their own in the 54th minute when Pippy Carroll clipped a free kick into the area and James O’Sullivan’s effort was deflected out for a corner.

It was frantic stuff during the final thirty minutes of this contest as Pippy Carroll, especially, tried to rouse the Peake Villa men. The next goal-scoring opportunity of significance, however, fell to Janesboro in the 63rd minute and, once more, ‘keeper William Tierney came to the rescue when Keith Mawdsley looked certain to score.

Seven minutes later the ball was in the Peake Villa net - Shane Clarke played John Tierney through on goal with a glorious back heel and although William Tierney saved John Tierney’s effort Keith Mawdsley was there to bury the rebound (from an offside position).

Peake Villa enjoyed one final opportunity of note to force extra-time in the 81st minute - the tireless Anthony Walker was central to some quality approach play before Pippy Carroll sprung the offside trap and played in Dale Loughnane. The second half substitute made a telling connection on his shot, but Janesboro ‘keeper John Mulready somehow managed to deflect the effort out for a corner.