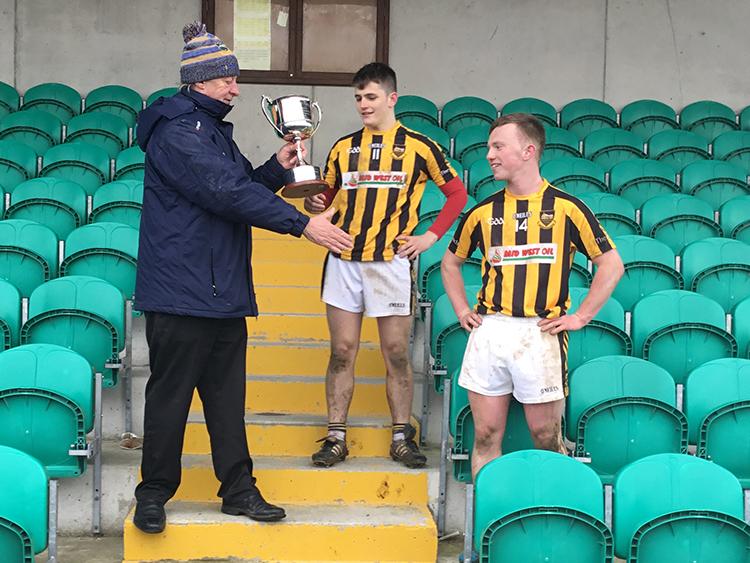 Champions for the first time in 2015 Upperchurch-Drombane regained the Tipperary Water County Under-21B Football Championship title and Seán Mockler Cup when they hung on for a narrow win over Killenaule at Templetuohy on St Patrick’s Day.

The sides mastered a bitterly cold cross-field breeze and a heavy sod to produce a rousing encounter and while Upperchurch-Drombane just about deserved to triumph Killenaule know well that victory could have been theirs’ had they been more productive in front of goal.

The win confirms Upperchurch-Drombane’s status as a growing force in football and a most successful dual club. They had to hang on grimly as Killenaule piled forward in search of a winning goal in the closing stages, but the Church spurned a couple of good goal chances earlier which, if taken, would have left them cruising at the finish.

The title was decided in the first half at the end of which Upperchurch had a five-point lead - 1-3 to 0-1.

Both sides set out to build their attacks from the back and in this regard Upperchurch were that bit more successful. Conor Fahey had a point for them in the second minute, but that effort was cancelled by Liam Maher’s effort for Killenaule after five minutes.

Two pointed frees by Loughlin Ryan pushed the Mid men clear after thirteen minutes and they ought to have had a goal in the 22nd minute when the effort was hooked wide with the goal open.

The goal did come four minutes later when midfielder Éanna Ryan was on the end of a fine build-up to crash home a goal that left his side 1-3 to 0-1 to the good at the break.

Killenaule had plenty of possession, but did not make the best use of it in the opening half. However, they resumed in much more purposeful mood - Points by Dean O’Connor and Killian O’Dwyer got them within a goal of their rivals by the 33rd minute.

Points from Conor Fahey and Jack Butler steadied the ship for Upperchurch and when Fahey extended their lead to six points (1-6 to 0-3) towards the end of the third quarter, they looked sure of victory.

With defeat staring them in the face Killenaule produced their best football. In the 48th minute Killian O’Dwyer, despite being under severe pressure, shrugged off a couple of tackles to score a goal which revived his side’s fortunes. Two minutes later Jack Hayes added a point and now it was Upperchurch who found themselves on the back foot.

Upperchurch wasted a goal chance and missed a free when scores were needed to stem the Killenaule tide. Niall Grant did give them a breather in the 56th minute when he pointed, but two minutes later Gus Browne pointed for Killenaule and in a hectic finish, with Killenaule on the offensive big time, Paudie Feehan struck the woodwork in the first minute of injury time.

That was as close as the South champions came and Upperchurch saw out the remaining time to record a great win for the club which is reaping the rewards for its commitment to football in recent years.

The victory was enthusiastically welcomed by supporters of the Church and it augurs well for their prospects at adult level to have such promising young talent coming on stream. Several of these lads have already worn the club jersey at senior level and while all round the squad put in a mighty effort, the contributions of such as Jack Butler, TJ Butler, Éanna Ryan, Conor Fahey, Niall Grant, Dean Carew and Loughlin Ryan were particularly significant.

One had to have sympathy for Killenaule whose brave effort for a first title came up just short. Their low-key first half display left them with that bit too much to do afterwards, but they did have enough of the ball and chances to have lifted the trophy.