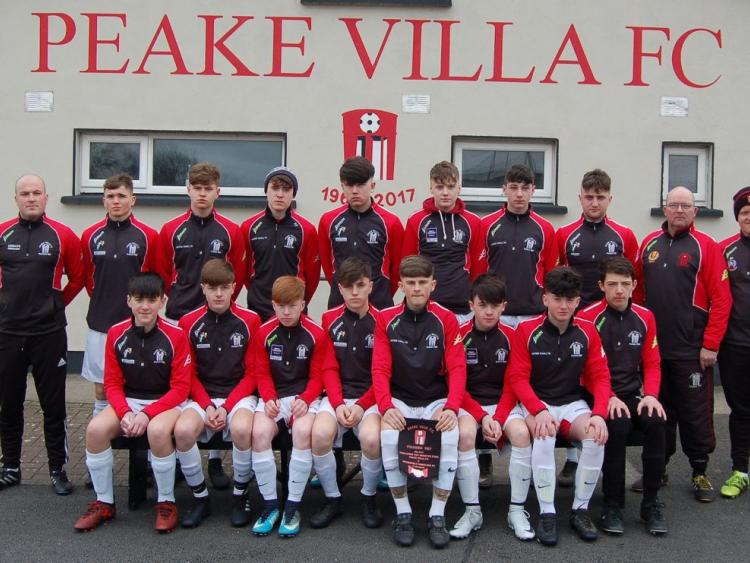 The Peake Villa squad of players who have qualified for the FAI Under-17 Challenge Cup semi-finals.

Peake Villa hosted Cork outfit Springfield Ramblers in the quarter-finals of the FAI Under-17 Challenge Cup on Saturday, March 17th and following a heroic performance emerged victorious on a 3-2 scoreline with Darren Flood, Kevin Patan and Max Hackett notching the goals.

Villa got off to a dream start in this huge game when Darren Flood’s volley from the edge of the box took a slight deflection on its way into the back of the net.

This strike set the tone for what would turn into an open cup game.

Springfield responded to the Villa early lead and slowly grew more into the game. And, the visitors levelled the tie when a set play wasn't cleared and was well finished from close range to make it 1-1.

The rest of the half was end-to-end with both sides looking dangerous and the away side enjoyed a 15-minute spell on top, but were mostly limited to shots from distance which Eoghan Tinkler was equal to.

The second half was a very entertaining affair.

During the first few minutes Darren Flood, Max Hackett and Liam McCormack all came close to putting Villa ahead, but the Springfield ‘keeper made some great saves.

Villa, after some continuous pressure on the Springfield goal, finally received their reward when they were awarded a penalty for a handball when Liam McCormack controlled a through ball first time and flicked the ball up. Kevin Patan coolly dispatched from the spot (2-1 to Villa).

Springfield came straight back at Villa and levelled just 3 minutes later with a sweetly struck effort from just inside the box to make it 2-2.

Villa showed true grit and determination in their efforts to break the deadlock. Max Hackett was unlucky with a shot on goal which went narrowly wide and was followed up by an excellent effort from long-range by Darren Flood which had the ‘keeper beaten but went narrowly wide of the post.

Villa continued to limit the scoring chances of the Springfield attack with every member of the squad hungry for the ball and the win.

Villa piled on the pressure and Villa finally breached the Springfield defence with two minutes left on the clock - Darren Flood did some great work to get to the bye-line and Max Hackett met his cross with a thunderous header to get Villa's neck back in front.

The lads kept their composure to see out the game.

This was a superb never-say-die performance from a special group of lads - they all played outstanding with the front three of Darren Flood, Kevin Patan and Liam McCormack leading the line. Villa's back four of Jordan Fahey, Dylan Maher, James Armstrong and Kieran Costello were very solid with Jordan and Kieran on the wings giving great support to the midfield trio of Cian Stakelum, Jack Casey and Max Hackett. And, the fact that captain Jack Casey played through the pain barrier just shows what this team is all about.

En route to the quarter-finals Peake Villa beat Bohemians FC (2-1), Drogheda Boys (1-1, 4-3 on penalties) and Manulla (3-2). Peake Villa, of course, will seek to emulate Nenagh AFC who won the under-17 national cup in 2016 (Tramore AFC won the title last season).

Villa travelled to Dublin on Monday, March 19th to take on St Kevin's Boys in this SFAI national cup quarter-final.

Villa lost the toss and St Kevin's Boys elected to play with the strong wind at their backs for the first half.

Villa started brightly and had most of the play for the first ten minutes as both sides tested each other out.

Villa's Alex Garcia Diaz and Darragh Stakelum were combining well in midfield to feed both Liam McCormack and Cathal McElgunn, who created a few chances, but they were well marshalled by the two St Kevin's Boys central defenders.

Villa were hit by a sucker punch in the 11th minute when a flowing move of passes from the back, ended up on the right wing where the St Kevin's Boys winger was given too much time to pick his pass and he played a sublime diagonal pass that split the Villa central defenders for the onrushing St Kevin's Boys striker to gather the ball at pace and place a ball past the out-rushing Josh Coady to go one up.

Villa responded and following a lovely move down the right-hand side Danny Treacy placed a perfect pass to Alex, who skipped passed the St Kevin's Boys defender and spotted Liam unmarked in the box, but his pass was intercepted by the St Kevin's Boys keeper to prevent the equalizer.

Villa's Darragh Stakelum combined with Liam McCormack down the left and Liam raced into the box only to be clipped from behind, but the referee awarded a goal kick to the bewilderment of the travelling supporters.

Both sides were adapting to the strong wind and for the next ten minutes St Kevin's Boys seemed to be playing that little bit more direct passing football, which again resulted in a break down the left hand side by the St Kevin's Boys left winger, who sent in a low hard cross into the box and, unfortunately, Josh came out to gather the ball, but the bounce of the ball went under his body and straight into the path of the St Kevin's Boys striker who calmly finished the ball into the back of the net.

St Kevin's Boys were now 2-0 up, but Villa reacted positively and continued to have a number of chances, but they were unable to convert.

Five minutes from the end of the first half, Tony Galvin played a lovely through ball into the path of Alex who hit it first time and the ball finished up in the back of the net - 2-1.

Villa pushed for the equalizer before half-time, but just could not get past a resolute St Kevin's Boys central pairing.

In the second half Villa had the advantage of the wind and began to have a lot more of the possession while St Kevin's Boys were content to defend their lead and pounce on the counter-attack.

Ten minutes into the second half Villa had another penalty claim declined when Liam was again clipped from behind just as he was about to shoot on goal.

The back four for Villa of Seán Condron, Shane Turner, Emmet Fogarty and Gavin Shaughnessy were solid in defence and restricted the St Kevin's Boys attack to only a few shots on goal.

One of these shots resulted in a point-blank save by Josh in goals.

Tony Galvin, Darragh Stakelum, Alex Garcia Diaz and Danny Treacy did their best to try and set-up the front two to score the equalizer and combined excellently with Liam McCormack and Cathal McElgunn.

Emmet Fogarty nearly had the equalizer when he got on the end of a Liam corner, but his header went straight at the St Kevin's Boys ‘keeper.

In the last few minutes the crossbar and the upright denied Peake Villa the equalizer. First, when Alex hit a superb curling shot from the left side which beat the St Kevin's Boys ‘keeper, but the visitors were dismayed when it clipped the crossbar and from the resulting ball Tom O'Reilly’s (a substitute for Danny) reflex shot came back off the upright and then Liam's shot from three yards was well blocked by the diving St Kevin's Boys defender and ‘keeper who combined to put the ball out for a Villa corner.

The Villa boys gave it their all and the club is justifiable proud of this squad of players. The club would like to thank St Kevin's Boys for being excellent hosts - the grub provided was well appreciated by the management, players and parents.