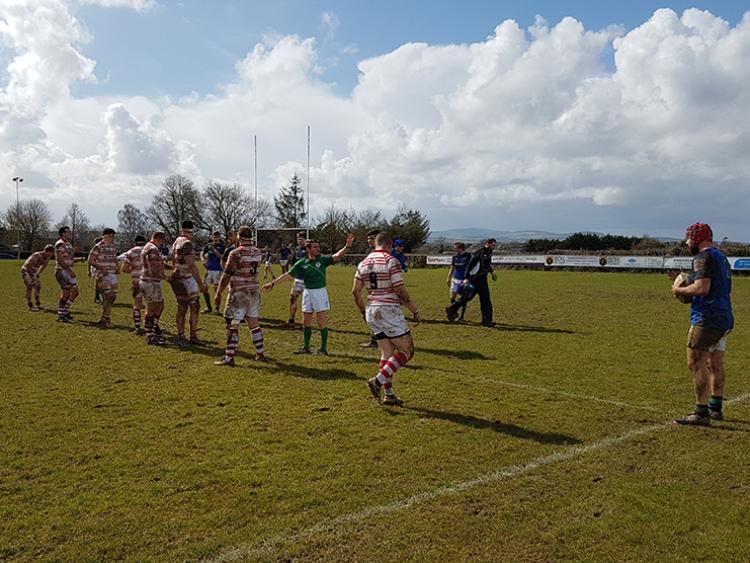 Although Nenagh Ormond lost to Queens University at home on Saturday (30-35) the side managed by John Long did manage to salvage two vital bonus points from the defeat - entering the final eleven minutes of this contest Nenagh trailed by fifteen points, but managed to score two tries in injury time which earned Ormond a losing bonus point and another for scoring four tries. And, that brace of points could, ultimately, prove vital to the Nenagh Ormond cause.

There were sighs of relief all round when the news filtered through that City of Armagh had lost at home to Galwegians (36-39) meaning that Highfield, Cashel RFC (who beat Blackrock College 27-24) and Nenagh Ormond now occupy the play-off positions with Malone requiring one more win to be assured of the league title and automatic promotion.

In the final round of games on Saturday, April 14th Cashel RFC are away to Galwegians, Nenagh Ormond are away to Malone and City of Armagh are away to Greystones (all three games kick-off at 2.30pm).

There is no denying the fact, however, that Nenagh Ormond are struggled to locate their very best form and Queens University were good value for their win at New Ormond Park on Saturday.

Nenagh took the lead in the ninth minute when Queens University coughed up a penalty following a sustained period of pressure - Clayton Stewart booted the home side into the lead. Seven minutes later, however, Queens University pieced together an impressive multi-phase attack and scooted in for a converted try (3-7).

Ormond re-claimed the lead in the 22nd minute when Queens struggled to clear their lines, Nenagh number eight John Hayes won a terrific turnover and the ball was moved swiftly through the hands of Derek Corcoran and Peter Coman before David Gleeson scored in the corner (8-7).

It only took Queens four minutes to respond - in the 26th minute the visitors notched a second try right under the Nenagh posts and led by six (8-14).

To be fair Nenagh Ormond then enjoyed their most dominant period of the game. Clayton Stewart found touch inside the Queens 22 following a penalty conceded by the visitors for not rolling away on the half-way line. The home side mauled their way toward the line and although Queens fought hard to keep Nenagh out Willie Coffey dived over the line in the 31st minute - Clayton Stewart added the extras and Ormond led 15-14.

See below for a video of Willie Coffey’s try in the 31st minute against Queens on Saturday.

Queens, however, refused to let the Coffey try discourage them and three minutes into first half injury time the visitors plundered another converted try under the Nenagh posts and led by six at the break (15-21).

Nenagh Ormond happened upon some good fortune in the 53rd minute when a penalty was harshly awarded against Queens. Clayton Stewart kicked to touch and from the resultant line out the ball was worked into the hands of Willie Coffey - the inside centre broke the line with a sensational burst and fed David Gleeson who timed his support run beautifully touched down for a smashing try (20-21).

See below for a video of David Gleeson’s try in the 53rd minute against Queens on Saturday.

Although Nenagh missed the subsequent conversion you suspected that the home side were now odds-on to win this contest. Queens University, however, had other ideas and scorched in for another try in the 67th minute which was converted superbly from the touchline. And then, just two minutes later, Queens broke down the field to score yet another converted try (20-35).

During the closing ten minutes Nenagh Ormond were camped inside the opposition 22 and, it could be argued, should have been awarded a penalty try at one stage while two minutes into injury time the raiding Nicky Irwin was pushed into touch just shy of the corner. A misfortunate knock-on from Willie Coffey also frustrated the home side during this frantic period.

Nenagh Ormond were playing like men possessed now and, finally, pushed the Queens scrum over the line for a John O’Flaherty try in the 85th minute. And, there was still time for Peter Coman to score an absolute cracker in the 89th.