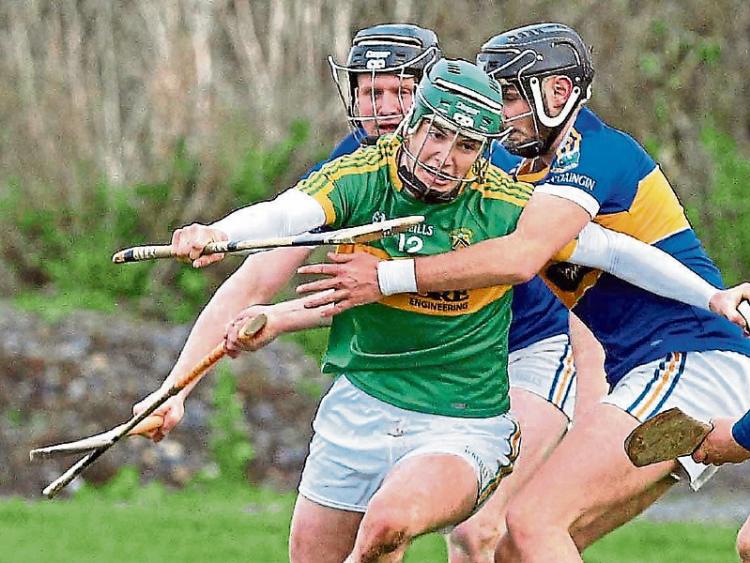 Cathal Bourke scored two first half points for Clonoulty/Rossmore in their win over Mullinahone at Bansha today.

West Tipperary champions Clonoulty/Rossmore were somewhat relieved to begin their county senior hurling championship campaign with a win over Mullinahone at Bansha on Sunday morning last, but on reflection both sides will have little to enthuse about after a poor contest.

On a very soft field and having to contend with a heavy drizzle for much of the hour, the conditions didn’t make for good hurling and the game never seemed to hit championship pitch, except for the last 10 minutes, perhaps. At that stage Clonoulty were coasting comfortably and nine points ahead leading 1-12 to 0-6, but the Kickhams men, as if suddenly realising the percariousness of their situation, upped the tempo to finish the better side. For them though that nine-points gap was too much too late, especially with a goal never looking likely, and the West Tipp side were fully deserving winners at the final whistle.

The John Devane managed Clonoulty started much the better and had it very much their own way early on building up a 0-7 to 0-0 lead after 17 minutes with centre-forward Dillon Quirke hitting three fine points from play, with the other scores coming from Timmy Hammersley (3, 2F) and corner-forward Cathal Bourke.

Having hit half a dozen early wides, Mullinahone had to wait until the 21st minute for their opening point, a free from over 65 metres from Eoin Kelly. By half-time they would have four points on the board, all from the former Tipperary legend, but worryingly all from placed balls. Mullinahone failed to score from play in the entire opening half. The highlight perhaps for them was the monstrous free – the last of the first half – by the All-Ireland winning captain of 2010, from well inside his own 45 metre line.

At the break Clonoulty were 0-9 to 0-4 to the good with late points from Cathal Bourke – a lovely effort from 65 metres off his left – and a well-deserved long-range effort from Michael Ryan (W) who was involved a lot around the centre of the park in the opening half. After another Eoin Kelly free was balanced by a Fiachra Kelly point early in the second half, the game’s decisive score came in the 38th minute. Clonoulty wing-forward Sean Maher made a powerful solo run in from the right wing and his well-timed hand pass was superbly blasted to the net from 14 metres out by Dillon Quirke. It now looked well and truly 'game over' at 1-10 to 0-5.

Midway through the second half John O’Neill finished a battled-for point for Clonoulty to stretch the lead to nine.

It took until the 46th minute for Mullinahone to register their very first point from play when again Eoin Kelly raised his sixth white flag of the day.

It was only in the last 10 minutes or so that the game livened up anyway like one would expect from championship fare. Fiachra O’Keeffe added his second point after a poor Mullinahone puck-out, before Eoin Kelly replied almost immediately with another long-range effort as he desperately tried to rally his younger teammates.

Between the 50th and 57th minutes Mullinahone had their best spell with five unanswered points as they suddenly found an intensity that was lacking previously. Jack Shelley making a great clearance was caught very late and Kelly tapped over the resultant close-in free to inch his side a little closer. County man Sean Curran made a good run to finish a point from half-way and then turned provider for substitute Enda Keane to reduce the lead further. And when Eoin Kelly scored a softly conceded 65 to make it 1-12 to 0-11 with three minutes remaining Clonoulty were wondering how they had let themselves get into such a tight corner.

But the West side stuck to their guns and finished strongly with Conor Hammersley scoring a 65 and a long range free in time added-on to see them close the door for victory. They will be pleased with the two points now in the bag but won’t be too excited about a game that they made hard work of winning despite coasting early on.

The Clonoulty full-back line looked solid throughout with corner-backs Joey O’Keeffe and James Ryan putting in a fine hour of graft. John O’Keeffe at centre-back, combined with the industry of Conor Hammersley and Michael Ryan had the West side well on top around the middle, particularly in the first half. Dillon Quirke (Clonoulty/Rossmore) who scored the game's only goal being chased by Jack Shelley (Mullinahone) during Sunday's County SHC game played at Bansha.

The scores came much easier for Clonoulty compared to Mullinahone with 1-10 from play. Here Dillon Quirke, Cathal Bourke, Timmy Hammersley and Fiachra O’Keeffe contributed most with Quirke’s early second half goal the decisive score.

Mullinahone on the other hand with just four points from play in over 60 minutes of hurling have a problem to try and address before their games with Nenagh and Roscrea. Having to wait until the final quarter to register a point from open play is a worry for Fintan O’Connor, and the Kerry county hurling manager, will have plenty to consider going forward.

Kevin Walzer, Paul Curran, Eoin Fennelly and Jack Shelley were soundest in defence for the CJK, but beyond midfield they relied way too much on veteran Eoin Kelly, though Sean Curran did come into it in late on and Enda Keane’s introduction at half-time certainly lifted his side.

A minute's silence was observed before to the game in memory of Councillor Eddie O'Meara, Mullinahone, who died prior to the weekend and who will be buried in Mullinahone on Monday. R.I.P.