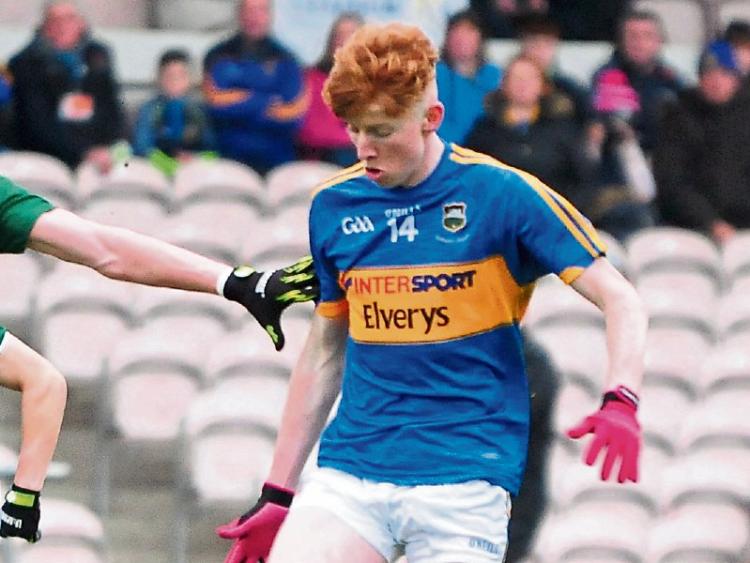 Tipperary minor footballers recovered from a heavy defeat to Kerry last week to record a superb win over Limerick in Newcastlewest tonight, winning 2-12 to 1-11 after extra time.

Two goals from Kyle Shelly were the crucial scores for a  battling Tipperary.

Tipp lost a four point lead in the closing stages of normal time but were the better side in extra time.

Limerick raced from the blocks and were 0-4 to 0-1 ahead inside 10-minutes.

Tipperary’s Kyle Shelly did open the scoring but the visitors to west Limerick had three early wides and five by half time.

Dylan Moloney (2frees) and Eoin Murphy (two from play) had the early Limerick scores in a half in which there was only one wide for the teenagers in green.

After building the early lead Limerick went 15-minutes without a score and Tipperary went ahead.

The Tipperary goal came in the 14th minute fro a penalty – Tim Lyons fouling Christy English and Kyle Shelly finding the net with a low finish for a 1-2 to 0-4 lead.

The next score was 10-minutes later and it was another penalty – Patrick Gallagher fouled. Up steps Dylan Moloney and confidently found the net to move Limerick back ahead.

English had the final say of the half to leave Limerick ahead by a single point at the break.

The interval lead was ensured when Kevin Walsh did well in the Limerick goal to save from Shelly in the final moments of the half and Luke Gammell was on hand to take the breaking ball off the goal-line.

Tipperary were a changed outfit from the off in the second half and were 2-6 to 1-6 ahad after eight minutes of play.

Their second goal came from Shelly again – in the eighth minute, after points from Devon Ryan and two frees.

Limerick had now just one score (penalty) in 30 minutes of play. Finally the barren spell was ended by a Moloney free 13-minutes into the half.

Captain John Hayes added a point from play to leave a goal between the teams entering the final quarter.

Sean O’Connor (free) interrupted the Limerick comeback but Moloney kicked another two frees for the home side and it was 1-8 to 2-7 with nine minutes to play.

Limerick lost captain John Hayes to a second yellow card in the final minute but Kevin Guinea (free) cut the lead to a single point in the first of five minutes of signalled injury time.

Up popped sub Keith O’Kelly to force extra time with a big score from distance. – just the second time the sides were level. The final four points fell to Limerick with Tipperary not scoring in the final quarter.

Luke Gleeson had the only Limerick score in the first period of extra time and looked to have given the interval lead to the home side until two late points from Tipperary, Kyle Shelly and Christy English (free) to leave it Limerick 1-11, Tipperary 2-9.

Limerick failed to score in the second half of extra time as Tipperary dominated. They had two early points and Limerick couldn’t respond, although they had three wides to bring their total to eight, while Tipp finished with 10.